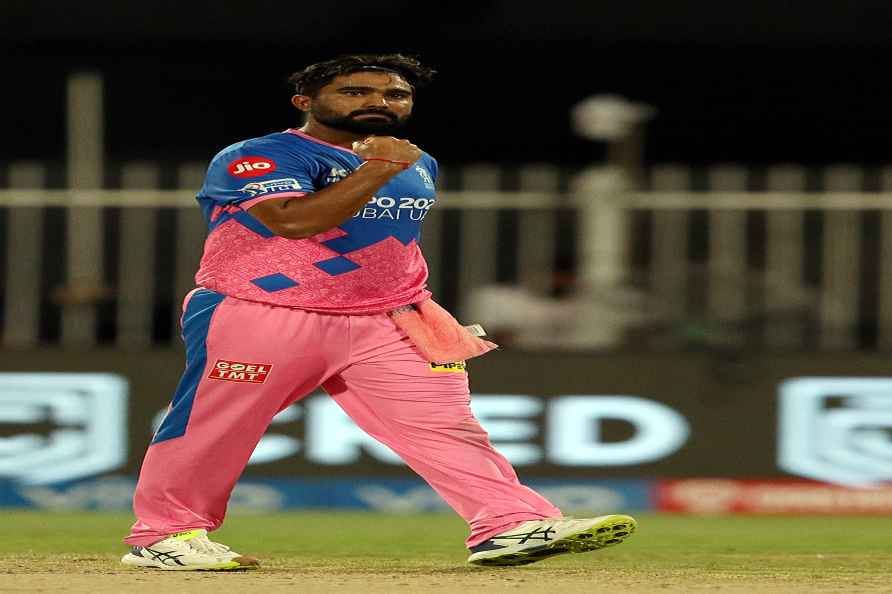 [Sharjah: Rahul Tewatia of Rajasthan Royals celebrates the wicket of Venkatesh Iyer during Indian Premier League cricket match between Kolkata Knight Riders and Rajasthan Royals, at the Sharjah Cricket Stadium, in Sharjah, UAE, Thursday, Oct. 7, 2021. ( /PTI] Sharjah, Oct 7 : Rajasthan Royals' captain Sanju Samson has won the toss and elected to bowl first against Kolkata Knight Riders in Match 54 of IPL 2021 at Sharjah Cricket Stadium here on Thursday. Samson said that his team made four changes to their playing eleven from the crushing loss against Mumbai Indians. Liam Livingstone, Anuj Rawat, Chris Morris and Jaydev Unadkat come in for Evin Lewis (niggle), Shreyas Gopal, David Miller and Kuldip Yadav. On bowling first, Samson said, "With the past matches, it has been easier to bowl first on this wicket. I think there have been a lot of learnings in the last game. The bounce was varying and it was two-paced. We need to be smarter with our shots and we need to bowl good lines and lengths too." Kolkata skipper Eoin Morgan said that pacer Lockie Ferguson is fit and replaces Tim Southee in the playing eleven from their win against Sunrisers Hyderabad. Morgan said, "We put in a strong performance on a slowish wicket in Dubai, and we need to just put up a good score here. Just because of the confidence within the group, we needn't look too far ahead. If we win here, those two points will take care of everything. Try free yourself up, and try to play to win for the team." Teams Kolkata Knight Riders: Shubman Gill, Venkatesh Iyer, Rahul Tripathi, Nitish Rana, Eoin Morgan (captain), Shakib Al Hasan, Dinesh Karthik (wicketkeeper), Sunil Narine, Shivam Mavi, Lockie Ferguson and Varun Chakaravarthy Rajasthan Royals: Liam Livingstone, Yashasvi Jaiswal, Sanju Samson (captain and wicketkeeper), Shivam Dube, Glenn Phillips, Anuj Rawat, Rahul Tewatia, Chris Morris, Jaydev Unadkat, Mustafizur Rahman and Chetan Sakariya /IANS

Need to impart education of other religions in madrasas: Maulana Qasmi
[**EDS TWITTER IMAGE POSTED BY @narendramodi ON SATURDAY, NOV. 13, 2021** New Delhi: Prime Minister Narendra Modi being presented with a saree by Padm

Shah to chair meeting of Southern Zonal Council at Tirupati on Nov 14
[**EDS: IMAGE MADE AVAILABLE FROM PIB** New Delhi: Union Minister for Law and Justice Kiren Rijiju felicitates a Tele-Law Frontline Functionary at the

Will Smith reveals his mother caught him having sex as teenager

Los Angeles, Nov 12 : Hollywood star Will Smith got candid about one of the embarrassing moments in his life. In his new memoir 'Will', the star shared that his mother once caught him getting in […]

Dibyendu Bhattacharya feels blessed to have a working birthday

Mumbai, Nov 12 : Actor Dibyendu Bhattacharya feels very fortunate to have a working birthday because it has given him a chance to go back to his home town Kolkata, that too for a Bengali film, close t […]