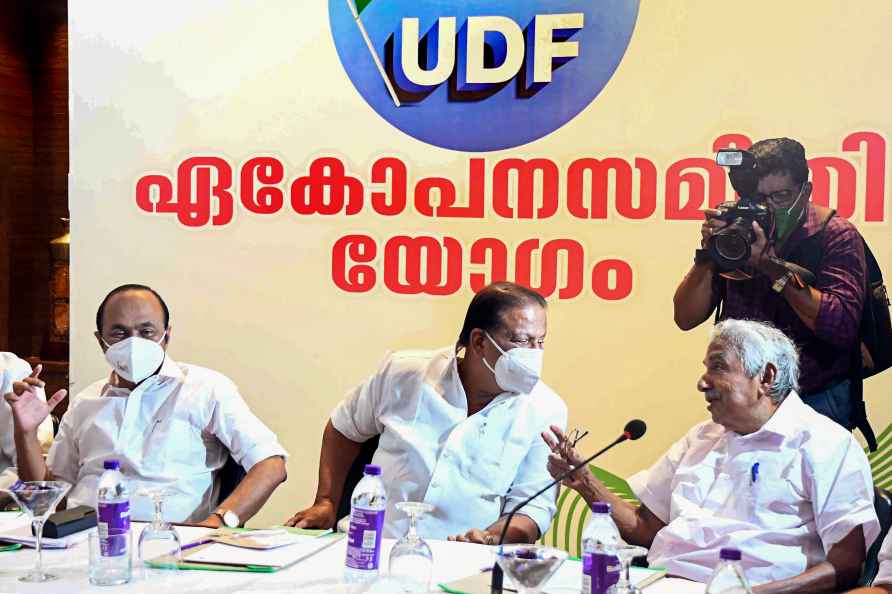 Thiruvananthapuram, Sep 27 : Hours after top Congress leader from Kerala, V.M. Sudheeran on Monday quit as an AICC member, the party high command stepped in as part of fire fighting when AICC general secretary Tariq Anwar came calling on him and after the meeting he said that he expects they will rise to the occasion. Sudheeran on Saturday first created a scare when he stepped down from the political affairs committee (PAC) of the party and on Monday he also quit as an AICC member. Soon after meeting with the AICC general secretary in charge of Kerala - Anwar, Sudheeran said he is extremely happy that they came and met him and said he is thankful to them. "The new leadership in the party in Kerala had evoked a lot of hope, but somehow things have not gone in the expected manner and it appears to have fallen short and failed to meet the expected standards of the Congress party. I pointed out in a letter to the concerned, but did not find anything. Now I expect that they (AICC) will rise to the occasion and I am waiting for it," said Sudheeran soon after Anwar left his house, here. The 73-year-old veteran is a former state party president, legislator, Lok Sabha member, minister, former Speaker and is known for his clean image in almost five decades of his public career. He sent his resignation letter to the AICC and is believed to have expressed his ire against the state party leadership led by new appointees President K. Sudhakaran and Leader of Opposition V.D. Satheesan. Sudheeran, till Monday evening had refused to open up in any manner on why he has been creating ripples. "One cannot link Sudheeran's quitting to that of a few leaders leaving the party, which happened early this month. Sudheeran is definitely one of the tallest Congress leader in the state. Things in the party unit here have been in shambles, ever since they lost the April 6 assembly polls, giving Pinarayi Vijayan his historic second successive term. There appears something more, which only he will be able to tell," said a top critic. Ever since the Sudhakaran-Satheesan team took over with the full blessings of the party high command in Delhi, ignoring the traditional faction managers of Oommen Chandy and Ramesh Chennithala which has been a norm, affairs in the state party unit has not gone down well among many Congressmen in the state. /IANS

Trouble looms for Balakrishnan as Mumbai HC to hear son's DNA case
Thiruvananthapuram, Dec 3 : The Mumbai High Court has posted for January 4 the case of a DNA test result of Binoy Kodiyeri, the elder son of CPI-M pol

Delhi to get 1.4 lakh more CCTV cameras
New Delhi, Dec 3 : Chief Minister Arvind Kejriwal said on Friday that 1,40,000 additional CCTV cameras will be set up in the city soon. His gov

New Delhi, Dec 3 : Delhi High Court (HC) has dismissed the Restitution Application of Delhi Metro Rail Corporation (DMRC) that had sought a refund of Rs 678 crore paid by the company to the lenders of […]