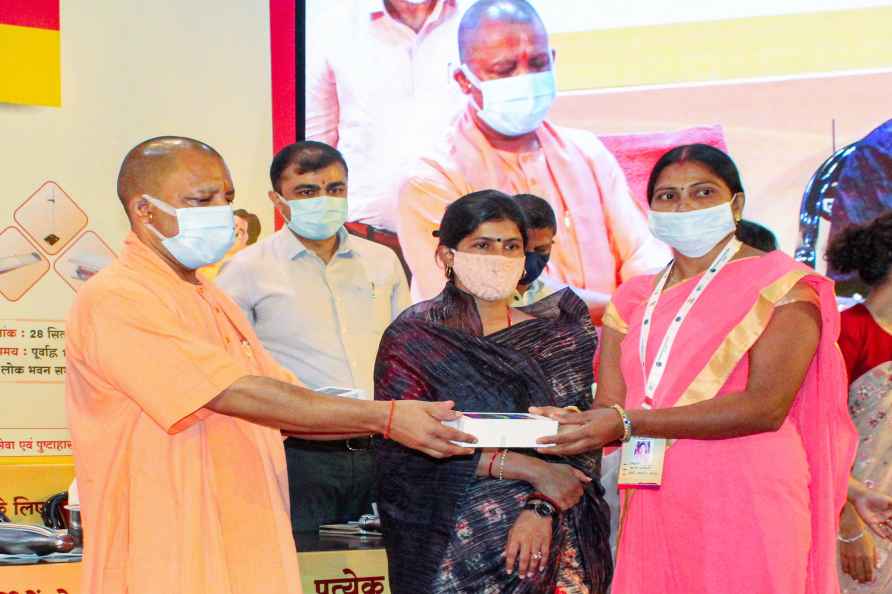 [Lucknow: UP Chief Minister Yogi Adityanath with State Minister Swati Singh gives smart phone to an Anganwadi worker during a government program, in Lucknow, Tuesday, Sept. 28, 2021. ( /PTI] Lucknow, Sep 28 : Had the assembly elections not been just a few months away in Uttar Pradesh, the much-publicized Pratapgarh incident would have been just another forgettable skirmish between over-enthusiastic political workers - one that is a routine feature in UP politics. On Saturday, a Gareeb Kalyan Mela was held at Sangipur development block auditorium in Pratapgarh district where the local BJP MP Sangam Lal Gupta was the chief guest. Gupta sauntered in two hours behind schedule and by then, former Congress MP Pramod Tiwari and Congress legislature party leader Aradhana Mishra, had arrived to participate in the event. Aradhana Mishra gave up her seat for Gupta when he arrived on stage along with his supporters, one of whom snatched the microphone and started shouting slogans. While BJP workers joined in the slogan shouting, Congress supporters also began displaying their lung power. The situation turned ugly as workers from both sides were locked in a scuffle. An hour later Sangam Lal Gupta held a press conference, with his shirt torn from the sleeves, and claimed that he was 'attacked' by the Congress leaders. Congress leader Pramod Tiwari recounts the sequence of events and says, "The function was at 12.30 p.m. but the BJP MP came late at around 2.30 p.m. and both Aradhana and I welcomed him. His supporters started raising slogans and people accompanying him then started misbehaving with zila pamchayat members. Since the stage was small and all could not be adjusted, there was some jostling. They damaged the mic and also pushed away the announcer. This turned the entire scene ugly and then they clashed with others present on the spot. Nine of my supporters have sustained injuries." However, BJP MP Sangam Lal Gupta stuck to his complaint and alleged that his supporters and he were attacked in a premeditated incident. "Their supporters even assaulted the Sangipur SHO present at the spot and also damaged my vehicle," he alleged. Based on his complaint, a named FIR was registered against 27 people, including Pramod Tiwari, his daughter Aradhana Mishra and Sangipur block pramukh Bablu Singh, besides another 50 unidentified people under relevant sections of the IPC for rioting armed with deadly weapons, unlawful assembly, voluntarily causing hurt and endangering human life or personal safety of others etc, at Lalganj police station at 7.41 p.m. on Saturday. Two hours later, at 9.14 p.m., another FIR against the Congress leaders and their supporters was also registered on the complaint of a BJP worker Devendra Pratap Singh followed by one more FIR against them at 9.53 p.m. on a complaint of Abhishek Kumar Mishra, son of a woman who had recently contested the panchayat polls. This was followed by another FIR at 10.52 p.m. on a complaint of BDC member Om Prakash Pandey. Later at 11.32 p.m., the fifth FIR was registered against the Congress leaders and their supporters based on a complaint of police constable Sunil Kumar who was providing security to the BJP MP. From the side of Congress leader Pramod Tiwari, Sangipur block pramukh Ashok Kumar Singh claimed to have submitted a complaint to the police accusing five named people, including BJP MP Sangam Lal Gupta, and his unidentified supporters, accusing them of tearing up government documents, violence and misbehaviour with women in connection with the incident. One Dharmendra Tiwari and another Chotelal Saroj claimed to have also submitted complaints at Lalganj police station against BJP MP and his supporters but no FIRs were registered. The BJP MP and his supporters staged a dharna and a heavy deployment of force was made to ensure peace. IG, Prayagraj range, K.P. Singh who had also visited Pratapgarh and taken stock of the situation after the incident, said, "The situation is under control and the investigation is underway." As the BJP MP refused to relent, the circle officer of Lalganj, Jagmohan Singh, was suspended by the state government for laxity in his work in connection with the incident at Sangipur. The CO was accused of failing to deploy adequate police force at Sangipur development block auditorium where leaders and supporters of two political parties were to attend the event. Chief minister Yogi Adityanath summoned Sangam Lal Gupta and asked him about the incident. He reportedly made sure that no further mileage was derived by the MP on the issue. The Congress, which had chosen to ignore the incident for more than 24 hours, suddenly woke up to the 'potential' of the same and demanded a judicial probe, late on Sunday. Not a single Congress leader from Lucknow bothered to visit Pratapgarh and express solidarity with the two Congress leaders. With Priyanka Gandhi Vadra in Lucknow on Tuesday, Congress workers across the state, staged protests and submitted memorandums to the chief minister, through district magistrates, demanding a judicial probe and withdrawal of cases against all Congress leaders. For all practical reasons, the intensity of the incident has subsided and both parties have apparently realized that it cannot be milked further for political gains. /IANS