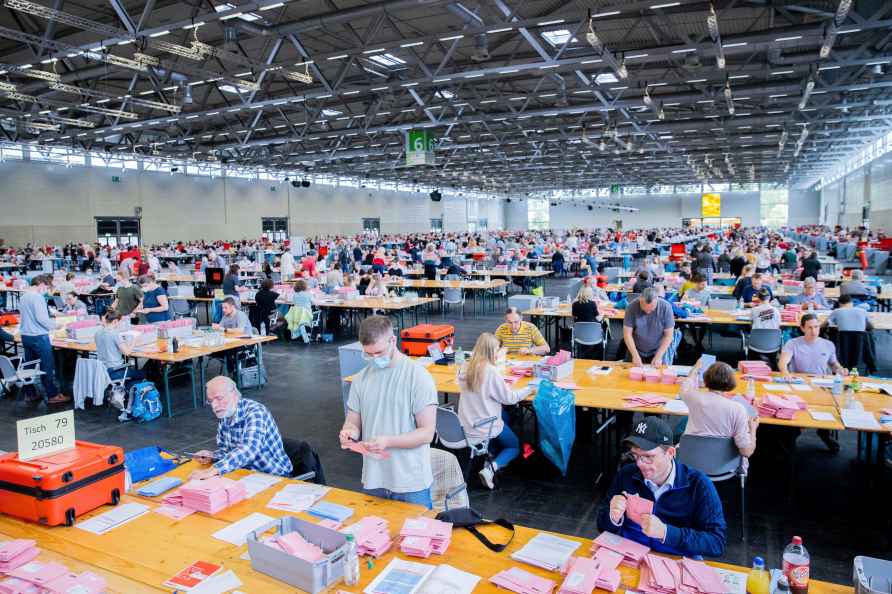 [Cologne : Election workers open the pink envelopes during the counting of the postal vote for the Germany parliament election, in Cologne, Germany, Sunday, Sept. 26, 2021. German voters are choosing a new parliament in an election that will determine who succeeds Chancellor Angela Merkel after her 16 years at the helm of Europe.......s biggest economy. /PTI] Berlin, Sep 26 : German voters went to the polls on Sunday to elect a new Bundestag, or the federal Parliament, which will form a new government for the next four years and usher in the post-Angela Merkel era. According to the Federal Returning Officer, around 60.4 million citizens are eligible to vote on Sunday, reports Xinhua news agency. Polling stations opened at 8 a.m., and will close at 6 p.m., reports Xinhua news agency. However, at least 40 per cent of eligible voters have cast their ballots by post, compared to 28.6 per cent in the last election in 2017. Polling institutions will interview voters anonymously at the exit of selected polling stations, and the initial results will be published exactly after the election ends through public broadcasters. The election is of great importance as incumbent Chancellor Angela Merkel will no longer run for re-election after almost 16 years in office. As she will retire from her political career, Germany and, to some extent, the European Union will enter a new era with unclear prospects. The competition is so fierce that it is difficult to predict which party will garner the most seats in the Bundestag. According to the latest opinion poll results, the latecomer Social Democratic Party, with Finance Minister Olaf Scholz as its Chancellor candidate, tops the list by only 1 to 4 percentage points ahead of Merkel's Union Party, whose Chancellor candidate is Armin Laschet, Minister President of the North Rhine-Westphalia state. Opinion poll results also showed that the Greens will probably become the third largest party, while the other three parties in the current Bundestag, the Free Democratic Party, the Left Party and the right-wing Alternative for Germany, are likely to cross the 5 per cent threshold for entering the Bundestag. /IANS

Japan PM vows to 'prepare for worst' to deal with Omicron
[Tokyo: Japanese Prime Minister Fumio Kishida delivers his policy speech during an extraordinary Diet session at the lower house of parliament in Toky

New Delhi, Dec 5 : Pfizer has won plaudits for its Covid vaccine delivery programme, but the US multinational faces growing scrutiny over the scale of its profits and the proportion of doses it has de […]

Naxals call for bandh in MP, Chhattisgarh, Maha on Dec 10

Bhopal, Dec 5 : The police in Madhya Pradesh's Naxal-affected Balaghat district have found pamphlets on road with a message calling for bandh in three states -- Madhya Pradesh, Chhattisgarh and Mahara […]

Omicron rears up in Maha, 7 cases detected in Pune