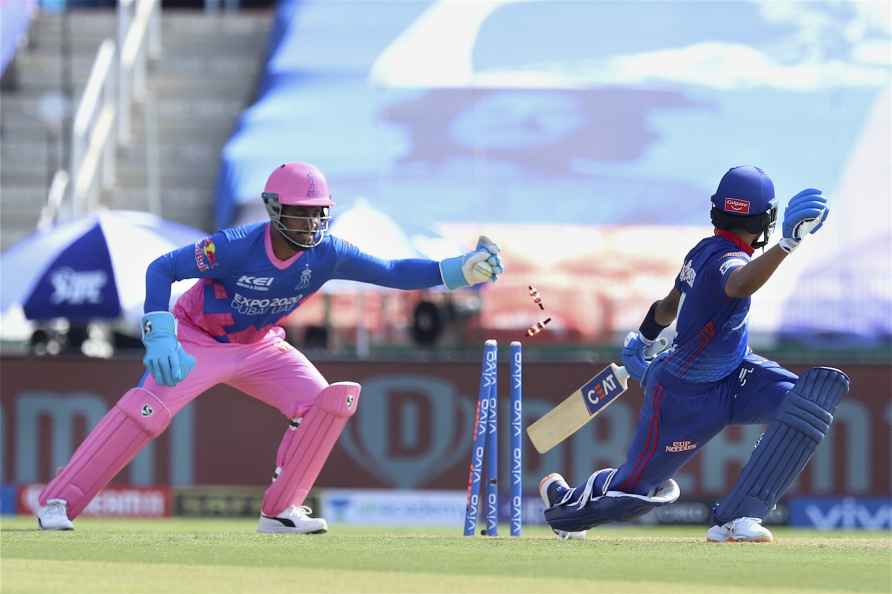 Abu Dhabi, Sep 26 : Rajasthan Royals director of cricket Kumar Sangakkara rued the fact that there was no one in the side to build a partnership with skipper Sanju Samson, which would have helped the side beat Delhi Capitals in a low-scoring match here on Saturday. Superb bowling on a slow pitch where batting was difficult helped Delhi Capitals outplay Rajasthan Royals by 33 runs and move to the top of the points table in IPL 2021 at the Shaikh Zayed Cricket Stadium. Rajasthan skipper Samson (70 not out, 53 balls) waged a lone battle, keeping the scoreboard moving with singles and twos through small nudges and touches interspersed with trick shots, reverse sweeps, and scoops, hitting boundaries here and there. But in the end that proved too little and too late as Rajasthan fell well short of the target. "Well, it was a tough one for the skipper (Samson), he was batting so well. All we needed was someone to stay with him and unfortunately losing wickets so regularly, didn't allow Sanju to cut free early on," said Sangakkara. "154 was a great total to limit Delhi Capitals to, [what] we needed to do was not be careless in the first 10 overs. Unfortunately, Delhi came hard at us, they bowled smartly and we weren't up to it," the Sri Lankan said. While the batting didn't click, Sanga believes it's not something he is worried about given the quality of the batting line-up. He has backed the players to do well as the tournament goes forward. "I wouldn't worry too much about the lower middle-order, they got us out of a lot of trouble in the first half of the IPL this season, and I am sure they will come good, as we go along," he added. Sanga further added that RR won't necessarily be making a change in the eleven because of the defeat. Samson, too, said that a decision on the playing XI will be made when the emotions from the defeat have dried up. "It is not just about making changes, it is about whoever does play, to kind of stick to the game plan and understand what is happening and assess conditions," Sanga said. "I thought the total was chaseable but we lost too many early wickets and weren't able to get any momentum in our chase. We might consider changes for the next game, but it is too early now. We have to remove all emotion before that," Samson said. After their defeat to the table-toppers and Punjab Kings' win over SRH, RR have slipped to seventh in the table. They will look to bounce back against SRH on September 27 without overthinking this loss, considering there's barely any time in between. /IANS

It's time New Zealand also got their spin bowling in shape: Ian Smith
Auckland, Nov 29 : Former New Zealand wicketkeeper-batter Ian Smith wants the Kane Williamson-led side to also learn a few spin tricks, which would he

Want withdrawal of cases against farmers, legal guarantee for MSP; Centre has time till Nov 30 to reply to demands: Punjab Farmer leaders.

Want withdrawal of cases against farmers, legal guarantee for MSP; Centre has time till Nov 30 to reply to demands: Punjab Farmer leaders. […]

Pankaj Tripathi on brand endorsements: I'm an actor not a salesman

Mumbai, Nov 29 : As major brands are lining up to sign actor Pankaj Tripathi for endorsements, the actor refuses to recklessly sign deals because he feels he has a moral responsibility towards his fan […]