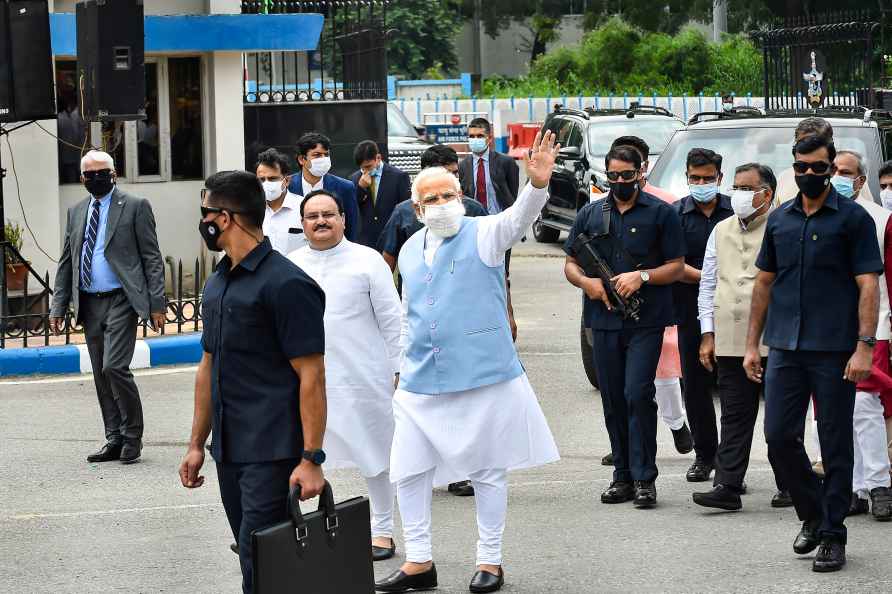 [New Delhi: Prime Minister Narendra Modi waves to supporters on his arrival from US, after concluding Quad Summit, at AFS Palam in New Delhi, Sunday, Sept. 26, 2021. BJP National President JP Nadda also seen. ( /PTI] New Delhi, Sep 26 : Thousands of BJP workers in the national capital on Sunday gathered at the Palam Airport technical area to give a grand welcome to Prime Minister Narendra Modi on his return after a successful visit to the US. Delhi BJP vice president Virendra Sachdeva told IANS that thousands of BJP workers have gathered at the airport to accord grand welcome to Prime Minister Modi on his return from another successful visit from abroad. According to Sachdeva a big stage has been set up where Prime Minister Modi will come and accept greetings from people. "A stretch of three kilometres from the airport has been decorated to greet the Prime Minister. Our workers and common people are standing on both sides of the roads with cutouts and posters of the Prime Minister," he said. Artists from different states have also been invited to play musical instruments from different parts of the country. "Musical instruments from different parts of the country are playing outside the airport and artists have been invited to play the instrument. Delhi BJP president Adesh Gupta will welcome the Prime Minister on his return. It is learnt that all the BJP MPs and MLAs have been asked to reach the airports to accord a grand welcome to the prime minister. Office bearers of BJP's Delhi unit and its three mayors also have been asked to reach the airport. During his recent visit, Prime Minister Modi held bilateral talks with US President Joe Biden, participated in Quad summit and also addressed the UNGA. /IANS

Thousands of BJP workers to welcome Modi at airport on return from US
[New Delhi: Prime Minister Narendra Modi waves to supporters on his arrival from US, after concluding Quad Summit, at AFS Palam in New Delhi, Sunday,

Mahant Narendra Giri's successor to be named in October

Bathinda: Punjab Chief Minister Charanjit Singh Channi interacts with the farmers and assures them of speedy redressal of their problems by the government, at Katar Singh Wala village in Bathinda, Sun […]