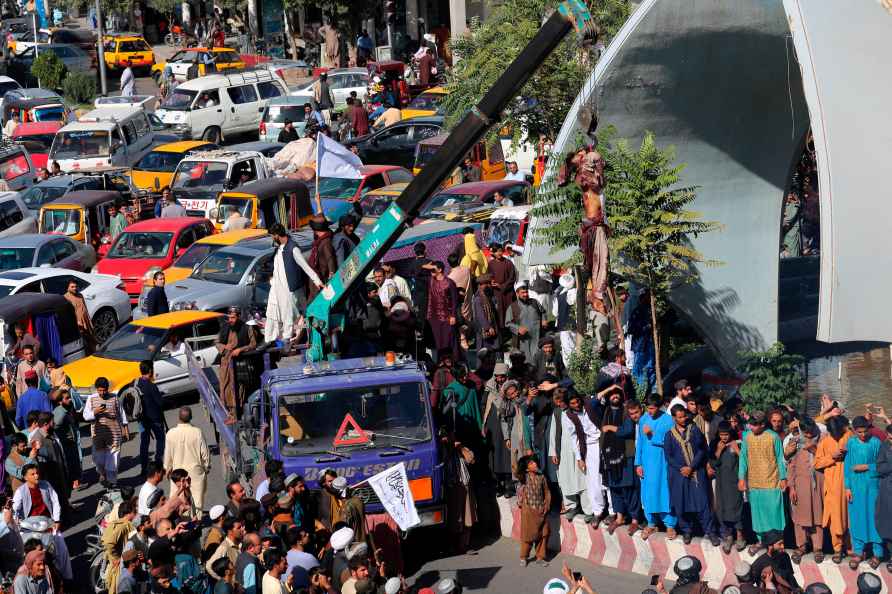 [Herat: A dead body hangs from a crane in the main square of Herat city in western Afghanistan, on Saturday Sept. 29, 2021. A witness told The Associated Press that the bodies of four men were brought to the main square and three of them were moved to other parts of the city for public display. The Taliban announced in the square that the four were caught taking part in a kidnapping and were killed by police... /PTI] New Delhi, Sep 25 : The Taliban reportedly hung the dead bodies of four alleged kidnappers in public in the western city of Herat in an apparent warning, the BBC reported. The gruesome display came a day after a notorious Taliban official warned that extreme punishments such as execution and amputation would resume. The men were killed in a gunbattle after allegedly kidnapping a businessman and his son, a local official said. The deputy governor for Herat, Maulwai Shair Ahmad Emar, was quoted by the local media as saying that Taliban fighters had tracked the alleged kidnappers down and killed all of them in a firefight, the report said.. "We hanged their dead bodies on the Herat squares as a warning to the other kidnappers," the official was quoted as saying. Since assuming power in Afghanistan on August 15, the Taliban have been promising a milder form of rule than in their previous tenure. But there have already been numerous reports of human rights abuses carried out across the country. The Taliban's notorious former head of religious police, Mullah Nooruddin Turabi, now in charge of prisons, said on Thursday that extreme punishments such as execution and amputation would resume in Afghanistan as they are "necessary for security". /IANS

ISL: SC East Bengal hoping for a reversal of fortune in game vs Chennaiyin FC
[Goa: Lallianzuala Chhangte of Chennaiyin FC tries to get past the defense during match 16 of season 8 of Indian Super League played between Chennaiyi

Bhopal, Dec 3 : The 37th anniversary of the Bhopal gas tragedy, one of the the world's worst industrial disasters in which 3,000-4000 people lost their lives on being exposed to methyl isocyanate gas […]

New Delhi, Dec 3 : The Supreme Court on Friday said the government should continue to implement concrete measures to curb air pollution and also allowed the Delhi government to continue with construct […]

Seoul, Dec 3 : The United Nations has excluded North Korea from its global humanitarian assistance plan for 2022, its recent report showed, apparently due to the impoverished country's prolonged borde […]

Mumbai, Dec 3 : Asha Bhosle, who will be seen as a special guest on 'India's Best Dancer 2', has praised the show's contestant Saumya and tagged her has 'Choti Helen' as the veteran singer was very i […]