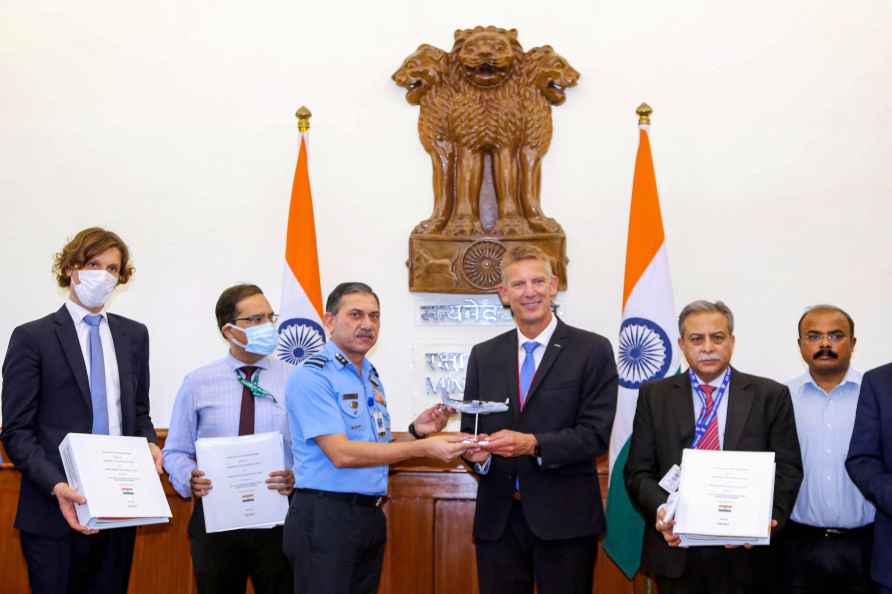 [New Delhi: Officials during signing of an contract between Ministry of defence and Airbus Defence & Space, Spain for acquisition of 56 C-295MW transport aircraft for IAF, in New Delhi, Friday, Sept. 24, 2021. ( /PTI] New Delhi, Sep 24 : Indian Defence Ministry signed contract worth around Rs 22,000 crore with Airbus Defence and Space, Spain on Friday for procurement of 56 C-295MW transport aircraft for the Air Force. Of these 16 aircraft are to be delivered in flyaway condition from Spain and 40 are to be manufactured in India. These 56 C-295MW transport aircraft will replace the ageing Avro aircraft of the Indian Air Force. The C-295MW aircraft is a transport aircraft of five to 10 tonne capacity with contemporary technology. It has a rear ramp door for quick reaction and para dropping of troops and cargo. On September 8, the government had approved procurement of 56 transport aircraft from Airbus Defence and Space S.A for the Indian Air Force. The Cabinet Committee on Security approved the procurement of 56 C-295MW transport aircraft. Sixteen aircraft will be delivered in flyaway condition from Spain within 48 months of signing of the contract and 40 will be manufactured in India by TATA Consortium within ten years of signing of the contract. This is the first project of its kind in which a military aircraft will be manufactured in India by a private company. All 56 aircraft will be installed with indigenous Electronic Warfare Suite. "The project will give a boost to the aerospace ecosystem in India wherein several MSMEs spread over the country will be involved in manufacturing parts of the aircraft," the ministry had said. This will provide a major boost to the 'Atmanirbhar Bharat Abhiyan' (Self-Reliant India Campaign) as it offers a unique opportunity for the Indian private sector to enter into technology intensive and highly competitive aviation Industry. The project will augment domestic aviation manufacturing resulting in reduced import dependence and expected increase in exports. A large number of detail parts, sub-assemblies and major component assemblies of aero structure are scheduled to be manufactured in India. The programme will act as a catalyst in employment generation in the aerospace ecosystem of the country and is expected to generate 600 highly skilled jobs directly, over 3000 indirect jobs and an additional 3,000 medium skill employment opportunities with more than 42.5 lakh man hours of work within the aerospace and defence sector of India. It will involve development of specialised infrastructure in form of hangars, buildings, aprons and taxiways. During the process of manufacturing in India, it is expected that all the suppliers of TATA Consortium, who will be involved in special processes, will gain and maintain globally recognised National Aerospace and Defence Contractors Accreditation Program (NADCAP) accreditation. "Before completion of deliveries, 'D' Level servicing facility (MRO) for C-295MW aircraft are scheduled to be set up in India. It is expected that this facility will act as a regional MRO hub for various variants of C-295 aircraft," the ministry had said. In addition, the original equipment manufacturer will also discharge its offset obligations through direct purchase of eligible products and Services from the Indian Offset Partners giving further boost to the economy. Reacting on the development, Ratan Tata said, "The clearance of the joint project between Airbus Defence and Tata advanced systems to build the C-295 is a great step forward in the opening up of aviation and avionics projects in India. "The C-295 is a multi-role aircraft with several reconfigurations to meet mission requirements. "It envisages total manufacturing of the aircraft in India. "It will create a domestic supply chain capability to international standards, which has never been undertaken before. "The Tata group congratulates Airbus and the Indian defence ministry for this bold step in fully building this state-of-the-art multi-role aircraft in India in support of the 'Make in India' thrust to bolster the country's equity framework. /IANS

Bengaluru, Nov 30 : A 'high alert' has been sounded in Tumakuru district of Karnataka on Tuesday after 15 students from Kerala studying nursing course tested positive for Covid-19 there, officials sai […]

Omicron variant can be detected by RT-PCR, RAT: ICMR chief

Saptrishi Ghosh opens up on his character in upcoming film 'Lakadbaggha'

Mumbai, Nov 30 : 'Tere Bin Jiya Jaye Na' actor Saptrishi Ghosh will be seen in a prominent role in the upcoming 'Lakadbaggha' where he will feature alongside Riddhi Dogra in Victor Mukherjee's film. […]