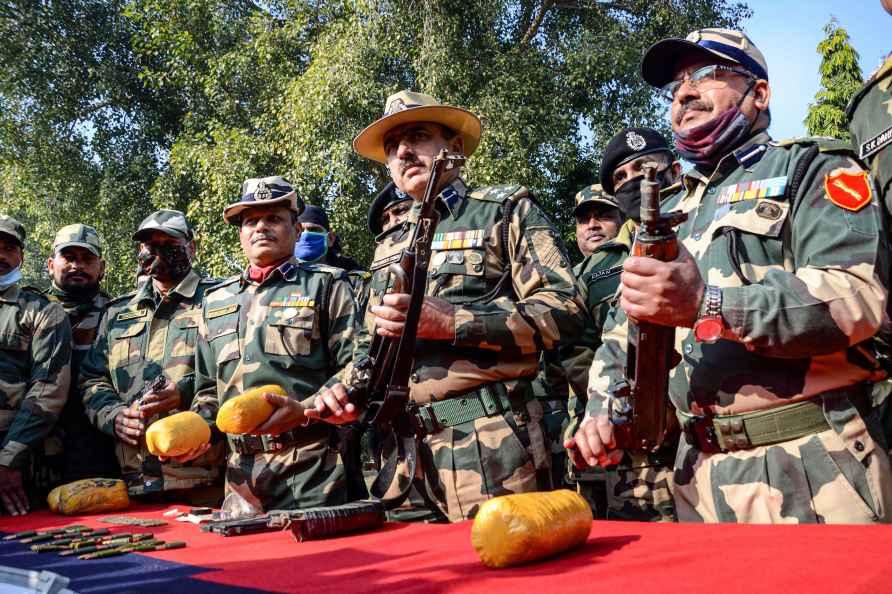 Lakhimpur Kheri (Uttar Pradesh), Sep 24 : About 15 elephants who strayed into Lakhimpur Kheri about two weeks ago, apparently from Nepal, are now wreaking havoc in the region. The herd has already destroyed several acres of standing crop and even damaged a temple gate. Samir Kumar, divisional forest officer (DFO), said that there were around 15 elephants in the herd, including two calves. The same herd had tried to cross over from Mailani range of Dudhwa Tiger Reserve in July to another forest but returned after failing to find a corridor to move on. The herd then moved to Pilibhit, where it apparently united with another herd and returned to Maheshpur range on Wednesday. The return of the herd indicates a bid to revive an old wildlife corridor that is now densely populated. Rajesh Singh, a local wildlife expert, said that "The last time wild elephants migrated here was in 1988-89. This herd has two young calves and the elephants are quite protective of their calves and may turn aggressive anytime. They target the sugarcane fields at night. They have destroyed the cane fields of several farmers at Mallapur village. We are lighting fires outside the village, using smoke with chillies, crackers and beating drums to keep the herd away. We have been monitoring their movement since they entered Kheri district from Pilibhit." Farmers claim that the elephants have trampled and destroyed paddy crops, causing a huge loss to them. The DFO said, "The sugarcane fields are possibly attracting the elephants here. The elephants have now reached Aonla block of forests and there is no forest area from here. Our ranger along with his team is monitoring the area and trying to minimise the possibility of animal-man conflict with the help of locals." /IANS

Lakhimpur Kheri (Uttar Pradesh), Sep 24 : About 15 elephants who strayed into Lakhimpur Kheri about two weeks ago, apparently from Nepal, are now wreaking havoc in the region. The herd has alrea […]

Kathmandu, Sep 24 : Nepal has resumed the on-arrival visa service to foreign tourists who have been fully vaccinated against Covid-19 with a view to revive the pandemic-battered tourism sector. […]