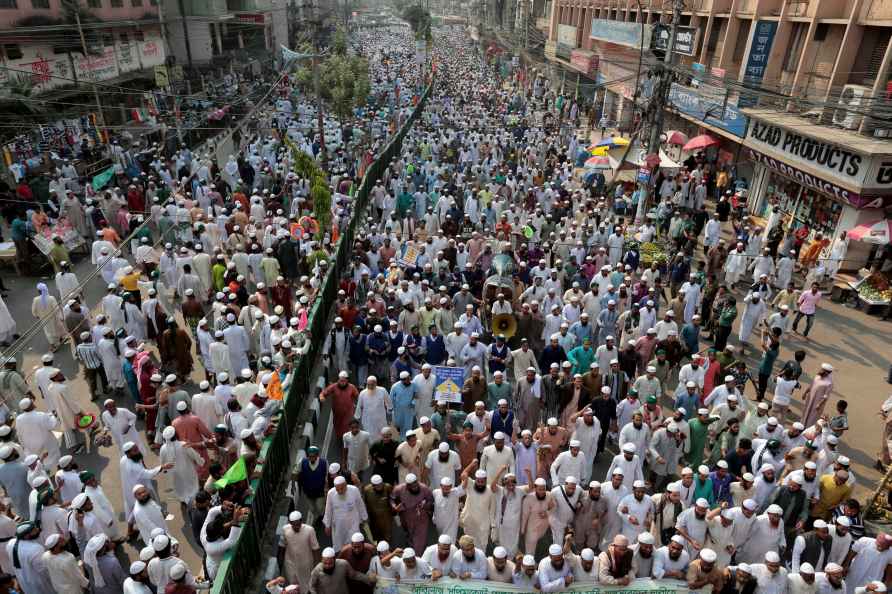 By Sumi Khan Dhaka, Sep 24 : Bangladesh's Supreme Court on Thursday granted conditional bail to Jhumon Das, a minority victim of militants, in a case lodged against him under the Digital Security Act for an "objectionable" post on social media against a Hefazat-e-Islam leader. "The court's high court division bench of Justice Mustafa Zaman Islam and Justice K.M. Zahid Sarwar allowed the bail on condition that Das does not to go out of his home district without permission from the lower court concerned," Advocate Z.I. Khan Panna, who led the bail plea for Das, told IANS. Senior advocates Subroto Chowdhury, Panna and advocate Nahid Sultana Juthi argued for Das' bail, while Assistant Attorney General Mizanur Rahman stood for the state. Das had filed bail petitions in the trial court seven times and following their rejection, moved the high court for bail. Since Das's arrest, various political, social, and rights organisations have been demanding his release from jail. His wife, along with their one-year-old child, joined different programmes organised by various organisations in the city, demanding his release. On March 15, Hefazat-e-Islam's then leaders Junaid Babunagari and Mamunul Haque spoke at a rally in Sunamganj's Derai upazila to protest Indian Prime Minister Narendra Modi's visit to Bangladesh. Hefazat activists alleged Das, from Noagaon village under Habibpur union parishad of Shalla upazila, had posting an "objectionable" Facebook status against Mamunul Haque. Arrested on March 16, Das was produced on the next day before a court, which sent him to jail. Meanwhile, over a hundred Hefazat activists attacked the Hindu community in Noagaon village over the Facebook post on March 17, vandalising and looting around 90 houses and temples. A case was filed with Shalla police station over the attack while a case under the Digital Security Act was filed against Das at the same police station. Das's wife Sweety Rani Das had said: "Those who were arrested for attacking our village were freed but my husband is still languishing in jail." Das' son Soumya was six months old when his father landed in jail. He turned one on September 12 and he is yet to recognise his father, though playing with his photograph. His aunts threw a small party on Soumya's first birthday. A small cake was cut and some children from nearby houses were invited. Meanwhile, Das's elder brother, 27-year-old Nupur Das said: "Managing bread and butter is a big challenge for us. We now have to spend money on the case of my brother. I don't know how long this will continue." Das' wife was struggling to manage the family in her husband's absence. /IANS

New Delhi, Nov 30 : The government on Tuesday said that 113 Left Wing Extremists (LWEs) have been killed this year during gun fights with the security forces. Besides, 25 security personnel were also […]

China says it is ready for Omicron with tests, zero-Covid strategy

Beijing, Nov 30 : China on Tuesday said it is ready to tackle the newly-detected Omicron coronavirus variant, and it is confident that the country's zero-Covid response along with the mainstream tests […]

New Delhi, Nov 30 : Twitter on Tuesday faced an outage mostly for its web users in India as they reported problems in gaining access to its website. The outage came as the micro-blogging platform was […]

Mumbai, Nov 30 : Richa Chadha, who plays the character of Zarina, a fading actress in 'Inside Edge 3', feels that it's the nuances and deeper layers of her character that have kept it relevant over th […]