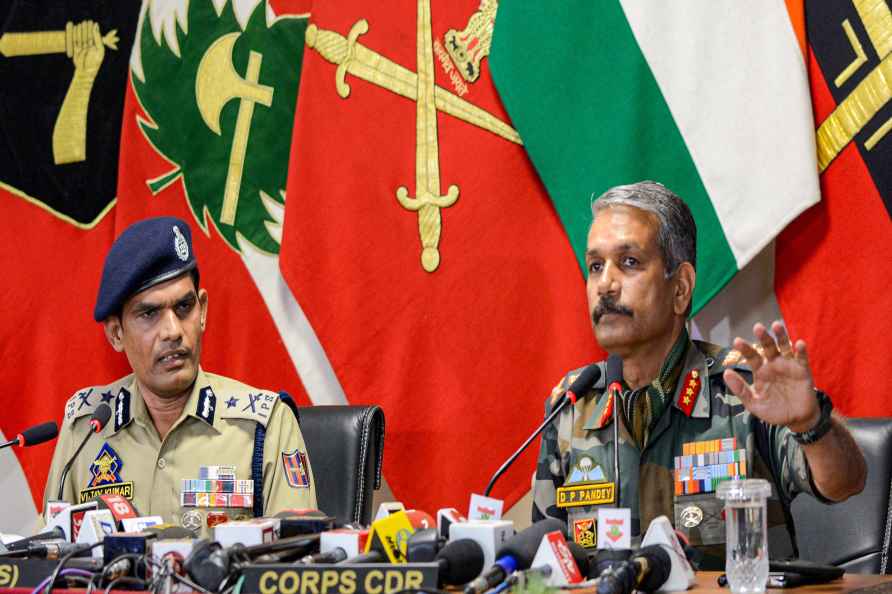 [Srinagar: General Officer Commanding (GOC) of Srinagar-based Chinar Corps (15 Corps), Lieutenant General DP Pandey along with Inspector General of Jammu and Kashmir Police Vijay Kumar addresses a joint press conference regarding the killing of 3 heavily armed militants (infiltrators) in Uri operations , at Badami Bagh Cantt. Army Headquarters in Srinagar, Thursday, Sept 23, 2021. ( /PTI] Srinagar, Sep 23 : Three heavily-armed infiltrators were killed on Thursday in four-day-long operation by the army in Uri sector of J&K's Baramulla district, officials said. At a press conference at Rampur army headquarters in Uri tehsil, where 19 infantry Division GOC Maj Gen Virender Vats was also present, 3 Rajput Regiment commanding officer, Col Manish Panj said the infiltrators were killed in an operation in Uri sector. "Three militants were killed in the gunfight that ensued today after days of cordon and search operation in a vast area along the LoC. "As surveillance was enhanced, the group of militants was challenged after they were intercepted at Hathlanga area of Uri at 6 a.m. . "Three militants were killed after a brief exchange of fire," Panj said. The army said the three slain militants were carrying huge quantity of arms and ammunition that includes five AK-47 rifles, seven pistols, 5 AK magazines, 24 UBGL grenades, 38 Chinese grenades, seven Pakistan-made grenades, Rs 35,000 in Pakistani currency and some edibles. Maj Gen Vats said that only one of the slain militants, a Pakistani, has been identified so far. "The identity of the other two is being ascertained," he said. On whether the infiltration had any Afghanistan link, the GOC said: "Army is alert and we were anticipating change in the behaviour of Pakistan in the month of September and expecting infiltration ahead of the onset of winter. "I would not like to connect this with the geo-politics. We are ready to foil all bids." Maj Gen Vats said after sanitising the area, the Uri operation has been called off. Authorities had also suspended mobile telephony and internet in Uri after reports that some militants had infiltrated the LoC in the sector. /IANS

Mumbai, Nov 30 : Richa Chadha, who plays the character of Zarina, a fading actress in 'Inside Edge 3', feels that it's the nuances and deeper layers of her character that have kept it relevant over th […]

Chattogram (Bangladesh), Nov 30 : Pakistan's Abid Ali has joined the elite club of the batters who have hit a century and 90 in the same Test match, but he was left disappointed after missing out on a […]

New Delhi, Nov 30 : A new monograph by the Observer Research Foundation, in collaboration with the Esya Centre, presents a deep-dive into the growth of cryptocurrency in India and proposes a balanced […]

Bhubaneswar, Nov 30 : Belgium are one of the top favourites for the title in the FIH Odisha Hockey Men's Junior World Cup, but Belgium head coach-Jeroen Baart said that the match against India on Wedn […]