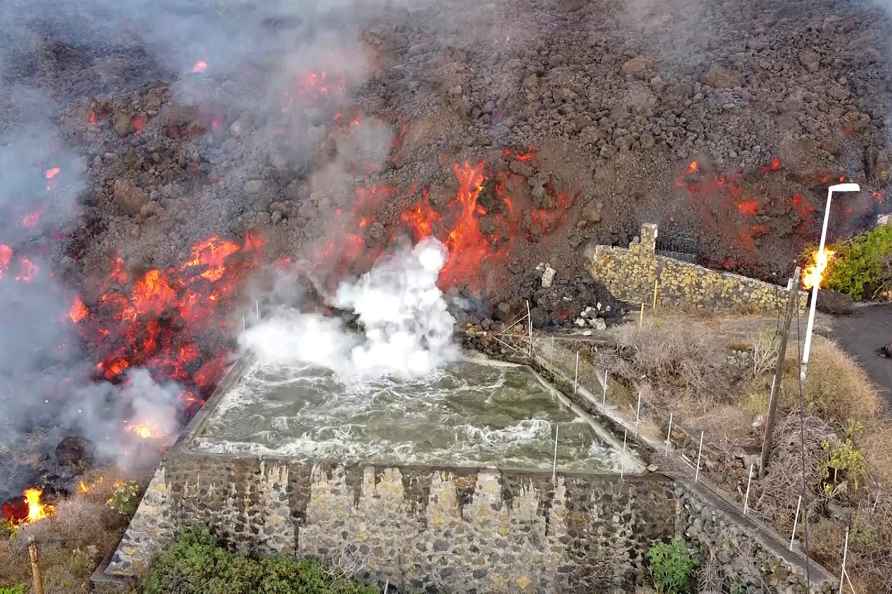 Madrid, Sep 23 : The eruption of the Cumbre Vieja volcano on the island of La Palma in Spain is expected to last between 24 and 84 days, according to experts. In a statement on Wednesday, the Volcanology Institute of the Canary Islands (INVOLCAN) said the flare-up, which began on Sunday afternoon, is not projected to last longer than the volcano's three previous recorded eruptions (24 days in 1971, 47 days in 1949 and 56 days in 1712), reports Xinhua news agency. Around 6,000 people from La Palma's population of approximately 80,000 inhabitants have been evacuated from their homes as the lava flow from nine different vents on the mountain is slowly making its way towards the sea at an estimated speed of 200 metres an hour. Images taken by the European Union's Earth observation satellite Copernicus show that 154 hectares of terrain have already been consumed by the lava to a maximum depth of 10-12 metres, and 320 buildings have been destroyed. The lava flow has caused extensive damage in the small town of Todoque, which is located between the volcano and the sea. Around 200 homes have been destroyed and a further 500 are in danger. Evacuated residents have been allowed to briefly return to their homes to collect their belongings. Around 750 civil defence personnel, including the Civil Guard, the Fire Brigade and members of the Spanish Military Emergencies Unit are ensuring the safety of the islanders. Six roads on the island have been closed, but air traffic both in and out of La Palma remains unaffected. /IANS

Thai newspaper reprimanded over headline
Bangkok, Dec 3 : A Central government agency tasked with managing Thailand's Covid-19 response has reprimanded a newspaper for its "poor choice" of he

Pune, Dec 3 : The events in round three of the Pune Open Golf Championship 2021 on Friday saw the tournament emerge into a two-horse race with Chandigarh's Abhijit Singh Chadha taking a one-shot lead […]

INSACOG recommends booster dose for 40 plus population amid Omicron threat

New Delhi, Dec 3 : The Indian SARS-CoV-2 Genetics Consortium or the INSACOG has said that a booster vaccine dose for people above 40 years of age 'may be considered' amid the rising threat of new Covi […]

Bangkok, Dec 3 : A Central government agency tasked with managing Thailand's Covid-19 response has reprimanded a newspaper for its "poor choice" of headline. "Let me state clearly and unequivoca […]