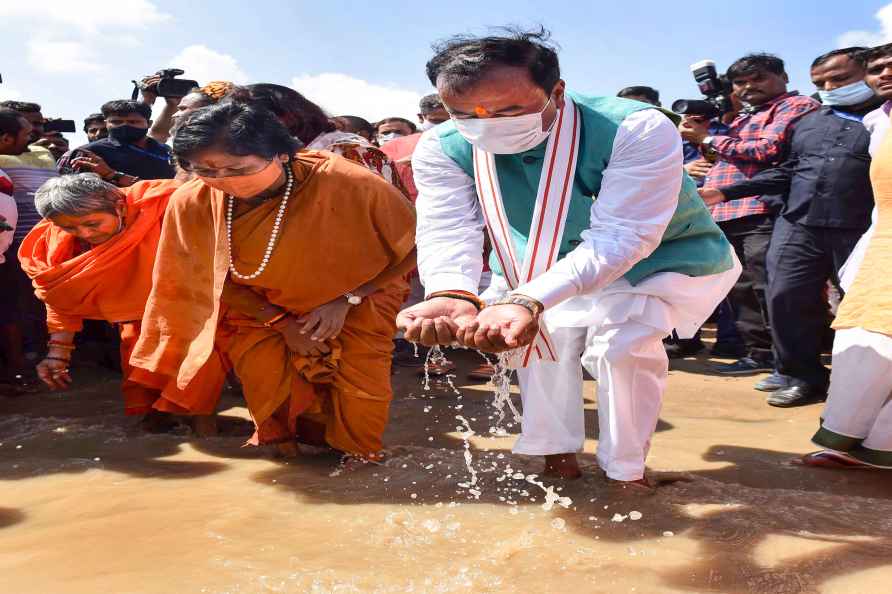 [Prayagraj: UP Deputy CM Keshav Prasad Maurya and former union minister Sadhvi Niranjan Jyoti before 'Nagar Yatra' of mortal remains of the Akhil Bharatiya Akhara Parishad President Mahant Narendra Giri Maharaj, who was found dead in mysterious conditions, in Prayagraj, Wednesday, September 22, 2021. ( /PTI] Prayagraj (UP), Sep 22 : The autopsy of Mahant Narendra Giri who was found dead in suspicious circumstances on Monday evening, was conducted on Wednesday morning by a panel of five doctors whose names have been kept a closely guarded secret. The panel of doctors included two from Motilal Nehru hospital, two from the district hospital and one designated by the chief medical officer. The entire autopsy process was video-graphed. The report has been sealed. Meanwhile, the mortal remains of Akhil Bhartiya Akhara Parishad (ABAP) president, Mahant Narendra Giri, will be taken out for 'nagar yatra' (procession) in Prayagraj city on Wednesday. All educational institutions and commercial establishments in the city will remain closed on Wednesday as a mark of respect to the departed saint. /IANS

Key Taliban members got scholarships to India
[Monaco: Prince Albert II of Monaco stands for the Monaco national anthem, during a ceremony honoring Joesphine Baker at the Monaco-Louis II Cemetery

Annual inflation in 19 countries that use the euro currency hits 4.9% in November, highest since records began in 1997. (AP)

Annual inflation in 19 countries that use the euro currency hits 4.9% in November, highest since records began in 1997. (AP) […]

New Delhi, Nov 30 : Four people, including two children, were found dead at a house in northern Delhi's Sirsapur village, an official said here on Tuesday. According to police, the man was ident […]

Before 2014, Bills referred to standing committee due to differences within ruling party: BJP

New Delhi, Nov 30 : Countering the opposition allegation of passing Bills without consideration of Parliament Standing Committees, the ruling BJP on Tuesday said that for 25 years before 2014 referrin […]