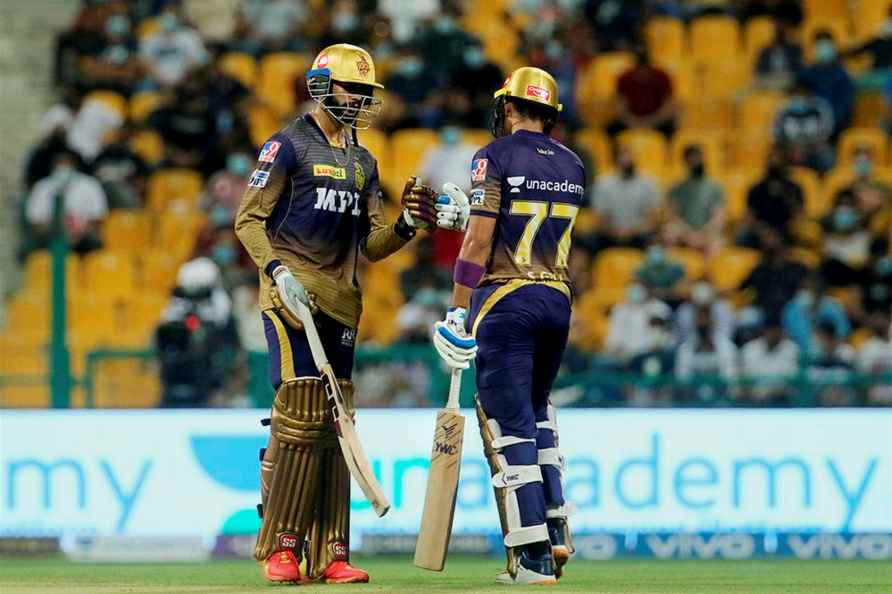 Abu Dhabi, Sep 21 : Kolkata Knight Riders (KKR) skipper Eoin Morgan heaped praise on Venkatesh Iyer, the 26-year-old who was making his debut for the side, for playing fearless brand of cricket as the side defeated Royal Challengers Bangalore by nine wickets at the Sheikh Zayed Stadium in Abu Dhabi on Monday. Iyer scored an unbeaten 41 runs off 27 balls with seven fours and one six to set up the massive win against the Virat Kohli-led side that is currently placed third on the points table. "I think Venky (Venkatesh), the way he came in and played, was outstanding and certainly the brand of cricket we want to play. We have a lot of talent within our group and certainly playing under Brendon McCullum; that is the aggressive nature in which we want to play. Although he was very aggressive, he managed to play with fantastic control throughout the innings, and his opening partnership," said Morgan of the southpaw. Set a target of 93 runs for victory, Knight Riders, led by an 82-run opening partnership between Shubman Gill and Iyer, registered a resounding victory with 10 overs to spare. Morgan also said that the team should take confidence from their 2014 championship-winning campaign and try and emulate their heroics by playing some aggressive brand of cricket. "Yeah, there is no doubt that it is going to be a challenge from here on, but our main aim is to turn up and try and play cricket like we have done today (Monday). If we do that, we give ourselves the best chance of progressing. It is certainly something that the franchise has done before and gone on to win the championship, so we take confidence from that, but more so, the confidence we take is from our performance with the ball and the bat and in the field today. I think, moving forward, if we continue to play in that manner, it makes us a dangerous side," he added. /IANS

Venkatesh played with fantastic control in win over RCB: Morgan

Abu Dhabi, Sep 21 : Kolkata Knight Riders (KKR) skipper Eoin Morgan heaped praise on Venkatesh Iyer, the 26-year-old who was making his debut for the side, for playing fearless brand of cricket as the […]

Agra, Sep 21 : Heavy showers lashed Agra Tuesday afternoon, flooding many parts of the city. Angry citizens blame the local administration and the municipal corporation for mess, as the whole city has […]

Antibodies from original Covid strain may not help fight variants

New York, Sep 21 : People infected with the original strain of the coronavirus that caused Covid-19 early in the pandemic produced a consistent antibody response, making two main groups of antibodies […]