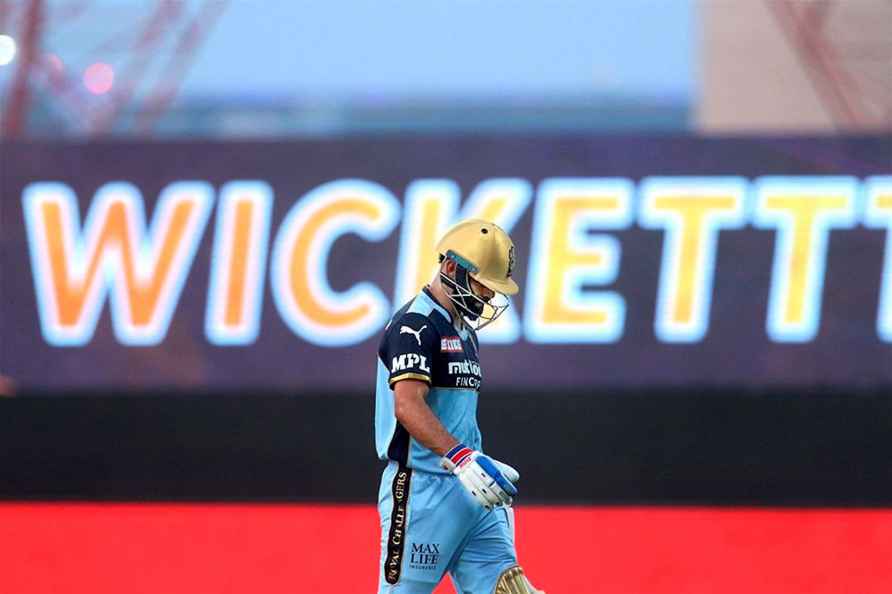 Abu Dhabi, Sep 21 : Kolkata Knight Riders' spinner Varun Chakravarthy, who played a major role in the his team's nine-wicket win over Royal Challengers Bangalore, taking three crucial wickets for just 13 runs, said he had a voracious appetite for taking wickets and wanted a rich haul every time he stepped into a cricket stadium. Chakravarthy first got rid of the dangerous Australian player Glenn Maxwell for 10, and then accounted for Sachin Baby (7) and Hasaranga de Silva (0) as the Virat Kohli led RCB were bundled out for just 92 runs in 19 overs. "I'm starting to like this ground (in Abu Dhabi) a lot. It's fun bowling here and a good challenge because flat wickets suit me. I don't like much of turning wickets, I like flat wickets; it suits me more," said Chakravarthy, who also turned in his best bowling performance in the IPL this season on Monday. In an interaction with West Indies' Andre Russell who also took three wickets in the nine-wicket win, Chakravarthy said that his celebration following a wicket-taking effort are muted because he doesn't want to get carried away before the task is actually completed. "Yeah, I want 24 wickets in every match (laughs). I don't want to get off from my process (by celebrating). If I celebrate too much, I can end up forgetting what I have to do the next ball, so I don't celebrate much, but later on I do celebrate," added Chakravarthy. Chakravarthy also said his bowling style was suited to flat wickets. "Turning wickets doesn't suit meĀ? much like Chennai doesn't suit me much but flat wickets do suit me more." On the prized wicket of AB de Villiers, who was bowled for a first-ball duck by an Andre Russell yorker, the West Indian all-rounder said that he had planned the delivery. "Yeah, actually I planned it because before that I was bowling a lot of length and back-of-the-length balls. Obviously AB is a very tough guy, so I was just trying to outsmart him and I got it right and it happened. The last time, he took us apartĀ? so first-ball yorker and it happens so I back myself. I didn't think he was expecting that ball," said Russell. /IANS

My celebrations are muted because I don't want to get carried away: Varun

New Delhi, Sep 21 : Samsung is likely to launch 'Galaxy F42 5G' smartphone in the last week of September and it will go on sale in October, industry sources told IANS on Tuesday. This will be Sa […]

New Delhi, Sep 21 : Manoranjan Byapari, who educated himself while in prison for participating in a tribal movement against feudal landlords, once worked as a rickshaw-puller and as a cook, is today t […]

Canberra, Sep 21 : More than 10 per cent of Australia's shark species are at risk of extinction, a government report revealed on Tuesday. The National Environmental Science Program (NESP) marine […]