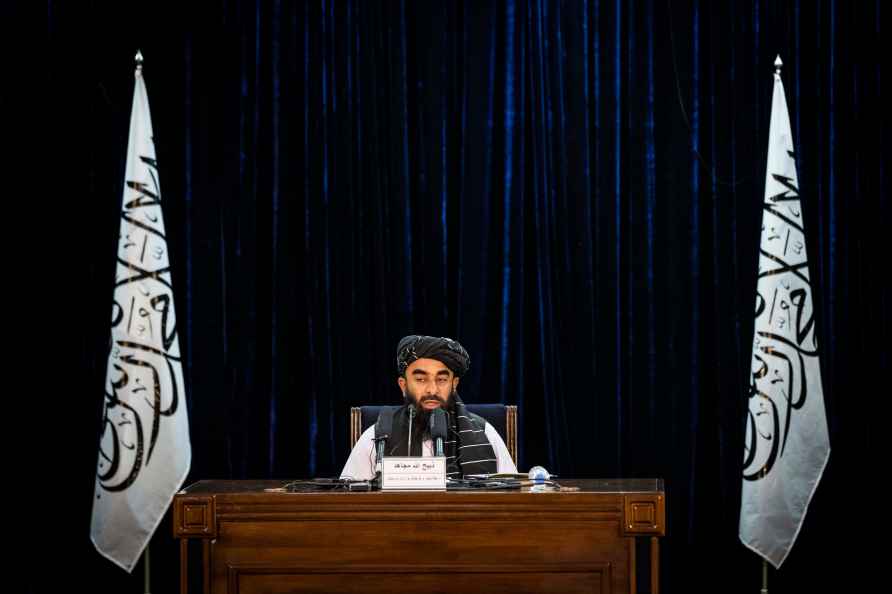 [Kabul : Taliban government spokesman Zabihullah Mujahid gives a press conference in Kabul, Afghanistan, Tuesday, Sept. 21, 2021. The Taliban have expanded their interim Cabinet by naming more ministers and deputies, but failed to appoint any women. At the news conference Tuesday, Mujahid held out the possibility of adding women to the Cabinet at a later time, but gave no specifics. /PTI] Kabul, Sep 21 : The newly-established Taliban caretaker government in Afghanistan has named the remaining Ministers and members, the group's spokesperson Zabihullah Mujahid said on Tuesday. "The newly introduced members of the cabinet are professional personalities including doctors and highly educated persons, also from minorities," Mujahid told reporters at a press conference. The newly introduced cabinet members have been appointed in line with the decree of Taliban supreme leader Mullah Haibatullah Akhundzada, Mujahid said. The spokesman said that a veteran businessman, Hajji Nurudin Azizi, has been appointed as acting minister for commerce, and Qalandar Ebad as the acting minister for public health. Mujahid also expressed hope that the international community would give recognition to the Islamic Emirate. At the press conference, he rejected the presence of the Islamic State, Al Qaeda or any other terrorist groups in Afghanistan, saying the Islamic Emirate is capable enough to smash any extremist organisation and won't allow any Afghanistan soil to be used against any country. The spokesman also announced that the inauguration ceremony for the new government has been cancelled due to their focus on providing service to the people at this point, TOLO News reported. Regarding the country's economic situation, he said that the domestic revenues might be enough for basic needs. "We are using all diplomatic channels to unfreeze the Afghan assets." When asked about the women's affairs ministry and girls' education, Mujahid said the caretaker cabinet is working to address women's demands for work and education. "We are working to complete the procedures so that girls can resume their education," he said. /IANS

Key Taliban members got scholarships to India
[Monaco: Prince Albert II of Monaco stands for the Monaco national anthem, during a ceremony honoring Joesphine Baker at the Monaco-Louis II Cemetery

New Delhi, Nov 29 : Following their 1-6 drubbing to Brazil in the opening game, India displayed good fighting spirit but still went down 0-3 to Chile in their second game of the Women's International […]

Los Angeles, Nov 29 : Hollywood star George Clooney thought he would die in his 2018 motorbike crash and said he was frustrated that people stopped to film him on the ground instead of helping. […]