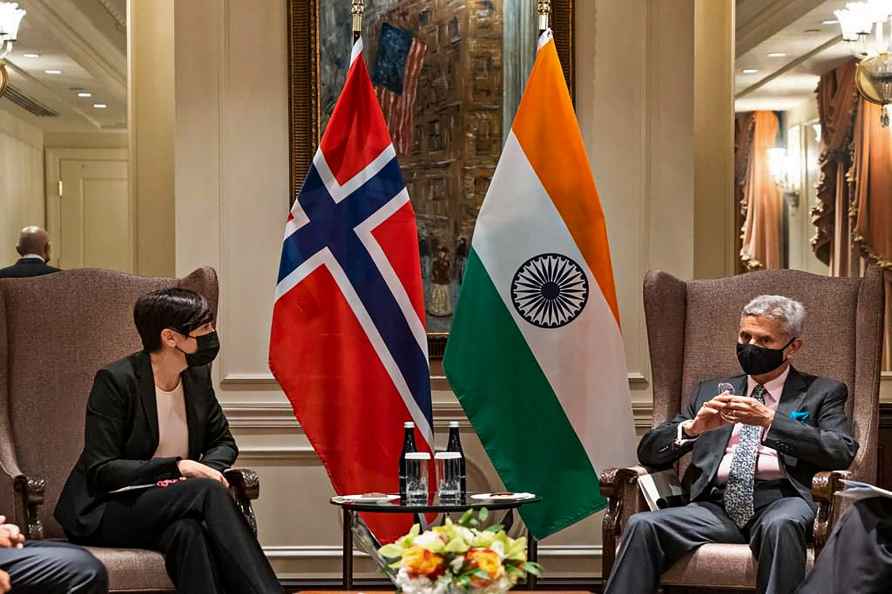 [**EDS TWITTER IMAGE POSTED BY @DrSJaishankar ON TUESDAY, SEPT. 21, 2021** New York: External Affairs Minister Dr. S. Jaishankar during UNGA meetings with Norway Foreign Minister Ine Eriksen Sřreide. Appreciated our working together in the Security Council. A comprehensive discussion on Afghanistan. Important for the international community to take a unified approach. ( /PTI] By Arul Louis United Nations, Sep 21 : India's External Affairs Minister S. Jaishankar has raised with the UK Foreign Secretary Elizabeth Truss her country's rules that require vaccinated Indian travellers to be quarantined and urged an early resolution of the issue. "Urged early resolution of quarantine issue in mutual interest," he tweeted after meeting Truss in New York on Monday as he began holding bilateral meetings with leaders from around the world. Under new British rules unveiled last week, Indians who have received two shots of the Covishield jab will be treated as unvaccinated and have to quarantine themselves for 10 days, even though the vaccine is the same as the AstraZeneca vaccine developed by Oxford University but manufactured in India and in use many Western countries like Canada. Travellers from several countries who have received the AstraZeneca vaccine are allowed into the UK without having to quarantine if they meet certain conditions, but not Indians in a move that is seen as discriminatory. The British side is yet to comment on the meeting between Jaishankar and Truss. This was Jaishankar's first meeting with Truss after she took over as Foreign Secretary from Dominic Raab last week. Jaishankar tweeted that they had discussed the progress of Roadmap 2030, an ambitious, decade-long plan to strengthen India-UK ties in areas ranging from defence cooperation and technology to climate change and investment. He said that they exchanged views on Afghanistan, which has been taken over by the Taliban upsetting the security situation in the region, and the Indo-Pacific. Last week Australia, the UK and the US announced a security pact, AUKUS, that would impact the Indo-Pacific region where India, the US, Australia and Japan are coordinating their strategies to counter China. Truss was the UK's International Trade Secretary before moving to the Foreign Office and Jainhankar said in his tweet that he "appreciated" her efforts in the trade sector. In her previous post, Truss had overseen consultation on a free trade agreement between the two countries. Jaishankar arrived in New York on Monday for a heavy round of diplomacy during the High Level Week of the UN General Assembly when leaders from around the world gather. He started off his round of bilateral meetings with Norway's Foreign Minister Ine Eriksen Soreide, whose country is on the Security Council alongside India as an elected member. "Appreciated our working together in the Security Council," he tweeted after the meeting. He also said in his tweet that they had a comprehensive discussion on the situation in Afghanistan where it was "important for the international community to take a unified approach". Iraq Foreign Minister Fuad Hussein was another leader Jaishankar met. "Discussed our historical ties, economic, energy and development cooperation linkages" and "exchanged views on regional and global issues" during their meeting, Jaishankar said. (Arul Louis can be reached at arul.l@ians.in and followed @arulouis) /IANS

Bangalore win toss and elect to bat first against Kolkata
[Abu Dhabi: Virat Kohli,captain of Royal Challengers Bangalore, walks back to the pavilion after getting out during match 31 of the Vivo Indian Premie

Green Bay: Fans watch during the first half of an NFL football game...

Green Bay: Fans watch during the first half of an NFL football game between the Green Bay Packers and the Detroit Lions Monday, Sept. 20, 2021, in Green Bay, Wis. /AP-PTI […]

Kate Winslet: Actresses are now under less scrutiny for their bodies

Los Angeles, Sep 21 : Hollywood star Kate Winslet, who won the award for lead actress in a limited series at the 73rd Emmy Award for her role in 'Mare of Easttown', believes actresses are now under le […]