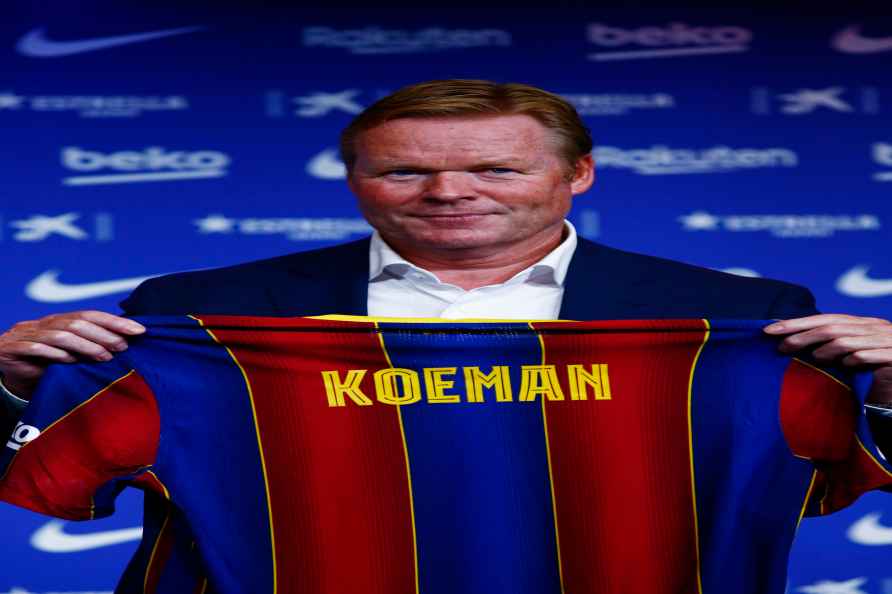 Madrid, Sep 19 : FC Barcelona coach Ronald Koeman faces a key test on Monday night when his side plays Granada in the Camp Nou Stadium. Last week's 3-0 Champions League defeat to Bayern Munich was a huge setback to Koeman as it made clear that Barca are currently not in a state to challenge for the Champions League. Meanwhile, their last La Liga game before the international break saw them struggle past Getafe that have lost all five games since the start of the campaign. In many ways, the criticism of Koeman is unfair, given that the squad was weakened over the summer with several players, including Leo Messi and Antoine Griezmann, leaving as the club looked to slash its wage bill, Xinhua reports. Kun Aguero arrived to provide firepower up front, but is yet to play due to injury, while right back Emerson Royal was sold to Tottenham less than a month when the club saw the chance to make some easy money. Martin Braithwaite is also falling victim to a knee problem, while young midfielder Pedri is out after his mammoth efforts last season. Ansu Fati, Ousmane Dembele and Jordi Alba complete Barca's injury list for Monday night, meaning Koeman will have to look to the B-team to fill the vacancy. Sergino Dest is likely to cover for Alba on the left with either Oscar Mingueza or Sergi Roberto stepping in at right back. Roberto could be asked to cover for Pedri in the middle alongside Frenkie de Jong and Sergio Busquets if Koeman decides against risking teenager Gavi in his starting 11. Ronald Araujo, Eric Garcia and Gerard Pique may start in central defence, while Memphis Depay may lead the attack along with Luuk de Jong, while fit-again Philippe Coutinho may also start. Granada have slipped after a positive start to the season, but the side coached by former Barcelona assistant boss Roberto Moreno has striker Luis Suarez. If Suarez can get on the score-sheet, it will turn into a long night for Koeman. /IANS

I think we did a really great, great job: Son Heung-min
London, Sep 19 : Son Heung-min is currently regarded as the most popular Asian footballer in the world. Son, who also serves as the captain of the Sou

Amrinder not losing sleep over upcoming AFC Cup tie against FC Nasaf
Dubai, Sep 19 : ATK Mohun Bagan goalkeeper Amrinder Singh believes his team has a very strong squad and can win the 2021 AFC Cup as well as the 2021/2

Pressure on Barca coach Koeman ahead of Granada game

New Delhi, Sep 19 : Ahead of the second phase of the IPL 2021, Kolkata Knight Riders' mentor David Hussey believes openers Shubman Gill and Nitish Rana will "shock the world" with their batting in UAE […]

Beijing, Sep 19 : At least nine people were killed and six others missing after a passenger boat overturned in a river in China's Guizhou province, local authorities confirmed on Sunday. The acc […]

We agreed to continue useful dialogue and look forward to strengthening partnership:Rajnath Singh after telephonic talks with US Defence Secy.

We agreed to continue useful dialogue and look forward to strengthening partnership:Rajnath Singh after telephonic talks with US Defence Secy. […]