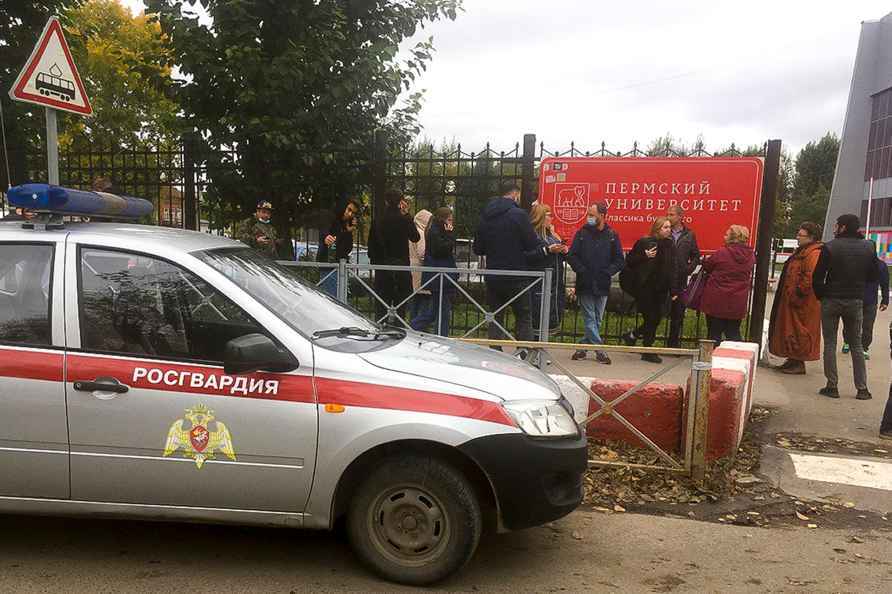 [Perm: People stand behind the fence near the Perm State University with the a Posguardia (National Guardia) on the left, in Perm, Russia, Monday, Sept. 20, 2021. A gunman opened fire in a university in the Russian city of Perm on Monday morning, leaving at list five people dead and others wounded, according to Russia's Investigative Committee. /PTI] Mowscow, Sep 20 : At least eight people were confirmed dead, with several others injured after a gunman opened fire in one of the buildings of Russia's Perm State University, authorities said, adding that the perpetrator is a student and has been apprehended. "Eight people have died as a result, several more have been injured," the Russian Investigative Committee told TASS New Agency. The Committee added that the suspect sustained injuries as he tried to resist being apprehended. A criminal case has been launched against the suspect on the count of a murder of two or more people. "A student opened fire on the territory of one of the buildings of the Perm State University. The information on the dead and injured is being specified. The suspect's identity has been established. He is detained," TASS News Agency quoted Svetlana Petrenko, an official representative of the Investigative Committee, as saying. A law enforcement agency source told TASS that during the shooting some students locked themselves in universities auditoriums to hide from the attacker, while others jumped out of the windows. The source added that the perpetrator was armed with 'traumatic' non-lethal weapon. The Perm State University, one of the oldest in the Urals, is located around 1,300 km east of the capital, Moscow. /IANS

Prince William, Indian girl take centre stage at COP26
[Extension Rebellion activists take part in a demonstration against 'Greenwashing' (an attempt to make people believe that your company or government

Amritsar: Devotees take part in the Nagar Kirtan procession, dedicated to the 400th anniversary of the release day Bandi Chhor Divas, in Amritsar, Wednesday, Nov. 3, 2021. The procession that started […]

'KBC 13': Akshay recalls how he used to sell jewellery before becoming an actor

Mumbai, Nov 2 : Bollywood actor Akshay Kumar has shared about his life before he entered the entertainment industry. Akshay along with Katrina Kaif and Rohit Shetty will be on 'Shaandaar Shukravaar' e […]

San Francisco, Nov 2 : Elon Musk-owned electric vehicle company Tesla has updated Model 3 and Model Y ranges with the 2022 model year, and most of them have got higher ranges -- though it depends on t […]