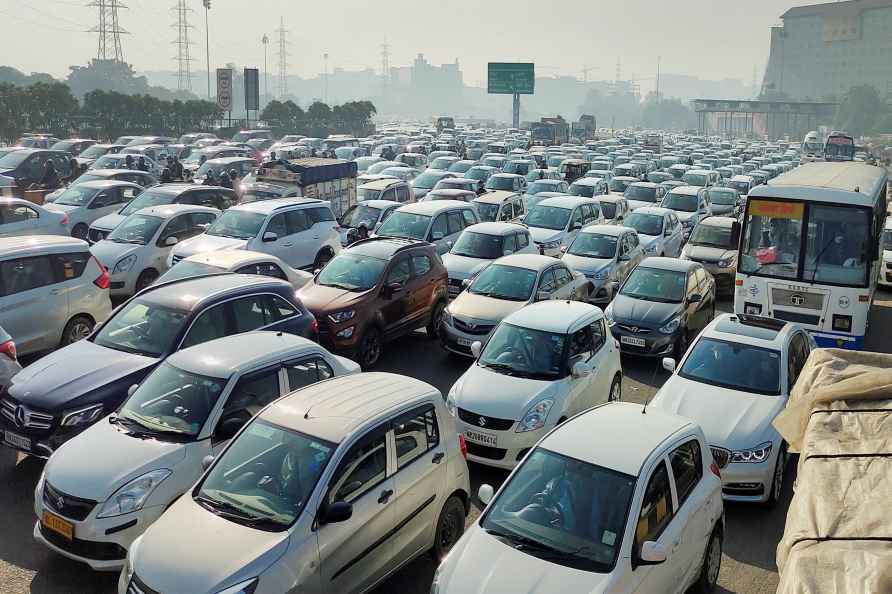 Gurugram, Sep 17 : Heavy traffic congestion was witnessed at the Delhi-Gurugram border on Friday during the rush hours as the police beefed up security due to farmers' agitation against the three farm laws and the Shiromani Akali Dal's protest call. A multi-layer barricading was placed at the border and a heavy police force, including the CRPF and RPF were deployed in the vicinity to check any untoward incident. Police said that officials have been directed to enhance patrolling in the area. "The Delhi Police have installed barricades due to farmers' protest. Traffic movement at the spot was slow due to vehicle checking," said a traffic cop of the Gurugram Police. Sources said six buses of suspected Akali workers were stopped by the Delhi Police at the Delhi-Gurugram border on the Delhi-Jaipur Expressway which led to huge traffic snarls for around 3 to 4 km from the border to Iffco Chowk. A senior officer of the Gurugram Police, requesting anonymity, said that the Delhi Police had stopped the suspected Akali workers at the Delhi-Gurugram border on the national highway-48 which led to traffic congestion on the expressway. However, the Gurugram Police reached the spot to facilitate the traffic movement. "The Haryana Police have no such orders to stop farmers entering Haryana. These suspected workers claimed they were going to Bangla Sahib in the national capital. They entered Gurugram through Kundali-Manesar-Palwal from Manesar and reached the Delhi-Gurugram border at around 1.00 a.m. on Friday. Farmers had said that they would be taking out a protest march against the Centre's three farm laws on Friday, marking the completion of one-year of the legislation being passed in Parliament. The Shiromani Akali Dal (SAD) had also given a call for protest in support of the agitating farmers. The three agriculture laws, which the farmers have been protesting against for several months now, were passed in Parliament on September 20 last year. /IANS

Chennai, Nov 27 : A video clip in which well known Tamil actor Mansoor Ali Khan is seen singing a song, while paddling a makeshift boat outside his home in floodwaters, is fast garnering attention on […]