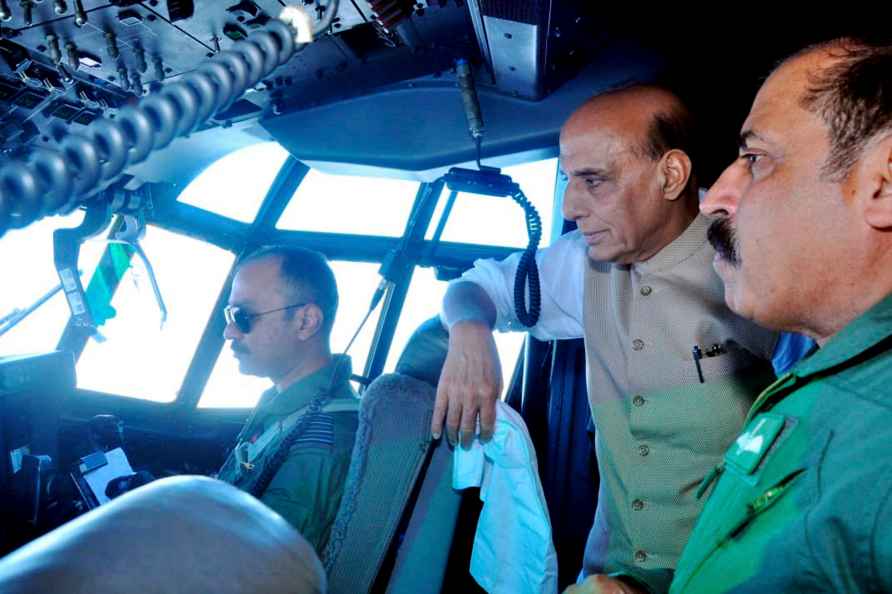 [**EDS: TWITTER IMAGE POSTED BY @rajnathsingh ON THURSDAY, SEPT. 9, 2021.** Barmer: Defence Minister Rajnath Singh with Air Chief Marshal RKS Bhadauria, on his way to inaugurate the Emergency Landing Facility (ELF) at Gandhav Bhakasar section on NH-925 in Barmer district. ( /PTI] Jalore (Rajasthan), Sep 9 : Defence Minister Rajnath Singh and Minister for Road Transport and Highways Nitin Gadkari inaugurated Emergency Landing Field (ELF) on the National Highway-925 in Rajasthan on Thursday. The emergency landing strip at Gandhav Bhakasar Section of NH-925, south of Barmer in Rajasthan, is the first time that the National Highway will be used for emergency landing of IAF aircraft. The NHAI had developed an Emergency Landing Facility (ELF) for the Indian Air Force, which is a part of the newly developed two-lane paved shoulder of Gagariya-Bakhasar and Satta-Gandhav Section having a total length of 196.97 Km costing Rs 765.52 crore under the Bharatmala Pariyojana. This project will improve the connectivity between villages of Barmer and Jalore districts located on the International Border. The stretch being located in the western border area will facilitate the vigilance of the Indian Army as well as strengthen the basic infrastructure of the country. Apart from this Emergency Landing Strip, three helipads (size 100 x 30 metres each) have been constructed in Kundanpura, Singhania and the Bakhasar villages in this project, according to the requirements of the Air Force and Indian Army, which will be the basis for strengthening the Indian Army and security network on the western International Border of the country. The ELF was constructed in a time span of 19 months. The work for this ELF was commenced in July 2019 and was completed in January 2021. The work was carried out by the GHV India Pvt. Ltd. under the supervision of the IAF and NHAI. During normal time the ELF will be used for smooth flow of road traffic. But during the operations of ELF for Indian Air Force order, the service road will be used for smooth flow of road traffic. It has been constructed in 3.5 Km length. This Landing Strip will be able to facilitate landing of all types of Aircraft of the Indian Air Force. /IANS

Bengaluru, Oct 17 : The recently concluded Dasara festivities followed by the weekend have proved to be a boost for the tourism sector in Karnataka. Amid the fears of Covid-19, a record number of peop […]

Seoul, Oct 17 : The chief of the UN nuclear watchdog has vowed to continue close consultations with South Korea and other nations over Japan's plan to discharge radioactive water from its crippled Fuk […]

Bijnor (Uttar Pradesh), Oct 17 : Life, at times, is stranger than fiction. When Rajendra Kashyap, a former village pradhan who was playing the role of King Dashrath, collapsed on stage after pronounci […]