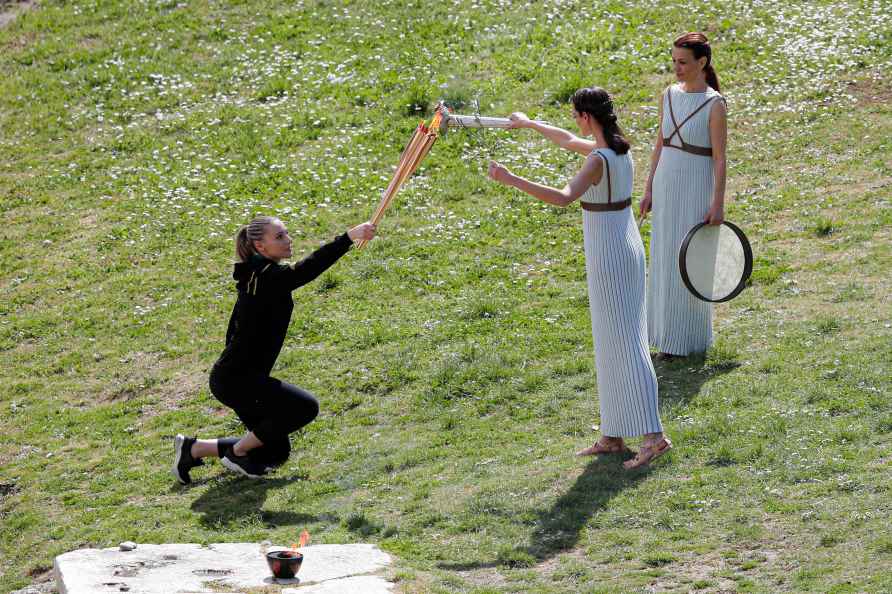 Tokyo, Aug 4 : The Indian men's hockey team will hope to bounce back from their semifinal loss to Belgium when they take on Germany in the bronze medal playoffs at the Olympic Games on Thursday. During their tour to Europe in February this year, India had played Germany in two back-to-back matches where they were able to put to test all the hard work that went in during the national camps in Bengaluru. This was India's first tour since 2020 when the pandemic restricted their travel, and in the first match, India beat Germany 6-1 and in the second they drew 1-1. Germany, on the other hand, went on to play the final of the EuroHockey Nations Championships in June this year. The German side drew 2-2 in regulation time against the Netherlands and had lost 1-4 in the penalty stroke. At the Olympic Games so far, Germany have registered four wins the Group stage (7-1 vs Canada, 5-1 vs Great Britain, 4-3 vs South Africa and 3-1 vs the Netherlands) and lost 1-3 to Belgium. In the quarterfinal they beat defending Olympic champions Argentina 3-1 and lost 1-3 to Australia in the semifinal. India, on the other hand, finished in the Top-2 in Pool A with four wins (3-2 vs New Zealand, 3-0 vs Spain, 3-1 vs Argentina, 5-3 vs Japan). They suffered a loss to Australia. In the quarterfinal, India beat Great Britain 3-1 and lost 2-5 to Belgium in the semifinal. "I think we should just forget about what happened in the semifinal and put all our focus and energy into the game against Germany. The team has the experience of playing them in recent times. We are ready for the challenge," said Manpreet Singh on the eve of the bronze medal playoff. He added, "We have the entire country's support. We are pumped up for the game." Chief coach Graham Reid said the team paid the price for not converting opportunities early in the game. "At 2-1, we created a lot of opportunities, and really we should have converted. We couldn't get that scoreboard pressure to go to 3-1. When it was 2-2 also, we had the opportunity to go 3-2. The number of opportunities at that time, we didn't get that scoreboard pressure back on Belgium. There were few periods of play when we lost the ball and they scored, and we spiralled a little bit after that. I think we paid the price of not getting that scoreboard pressure back onto them when we could have," rued Reid. But he said the team will make amends when they face off against Germany. "As far as Germany is concerned, players are keen to make amends for yesterday (Tuesday), they are aware the bronze medal is up for grabs. Mentally we are in the right space, and we will be working harder. We will be making sure all our T's are crossed for the games against Germany." /IANS

Your achievements will encourage budding athletes: PM Modi to Paralympians
New Delhi, Sep 12 : Prime Minister Narendra Modi on Sunday shared a glimpse of the event in a trailer video posted in the tweet, where he is seen inte

4 venomous Kraits rescued from a 20-ft borewell in Agra

Agra, Sep 14 : Four venomous Common Kraits were rescued by the rapid response unit of a non-governmental organisation, Wildlife SOS on Tuesday from a nearly 20-feet deep borewell in Jugsena village at […]

Manila to be placed under 2nd-highest Covid alert

Manila, Sep 14 : The Philippines government will place Metro Manila, were over 13 million people currently reside, under Covid-19 alert level 4, the second-highest, from Thursday onwards due to increa […]

Tokyo, Sep 14 : Japanese Justice Minister Yoko Kamikawa said on Tuesday that the country is considering the introduction of a tougher jail sentence as part of penalties for cyber crimes. Kamikaw […]

London, Sep 14 : Planning to build a house on Mars may now be easy as scientists have created a concrete-like material made of extraterrestrial dust along with the blood, sweat and tears of astronauts […]