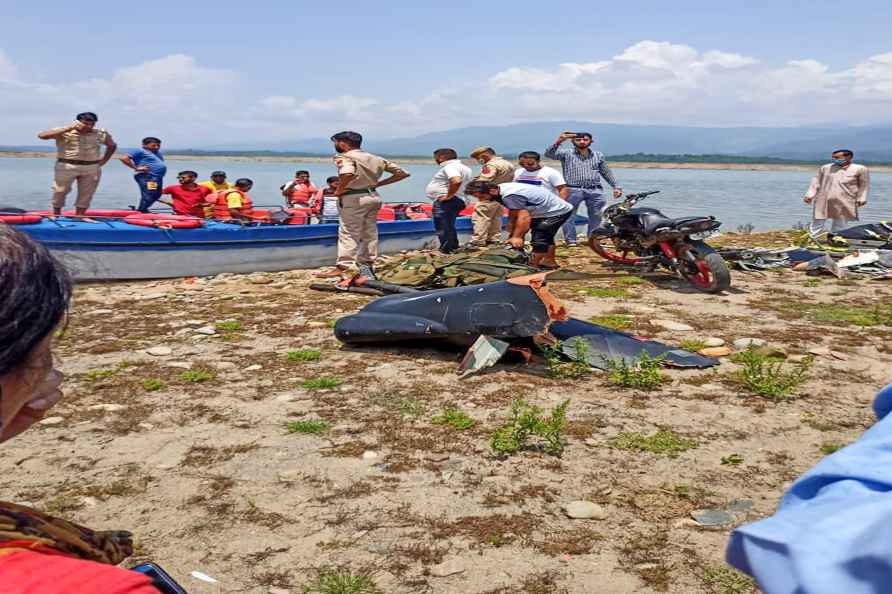 [Kathua: Police and NDRF personnel at the site after a helicopter of the Indian Army crashed near Ranjit Sagar Dam Lake in Kathua district, Tuesday, Aug 3, 2021. ( /PTI] Jammu, Aug 3 : Both pilots of the army helicopter that crashed on Tuesday in Jammu and Kashmir's Kathua district are safe, defence sources said. Army's aviation ALH Dhruv helicopter that had taken off from Pathankot in Punjab crashed Tuesday morning into the Ranjit Sagar Dam. "Both the pilots are safe. The weapon system integrated helicopter had taken off from Pathankot and met with an accident during a routine sortie", defence sources said. The area of the Ranjit Sagar Dam where the crash occurred is in Kathua district of J&K. A rescue operation is already underway at the crash site, sources added. /IANS

4th Test: England pacers blow away top three of India's batting
[London: India's Virat Kohli walks off the pitch after being given out caught by England's Jonny Bairstow off the bowling of England's Ollie Robinson

NY Guv declares state of emergency over Hurricane Ida
[New York: Ragendra Shivprasad, the landlord of a building where three people were killed when several feet of water collapsed the wall to a basement

London, Sep 2 : UK retailers will face mounting pressures in the coming months because of lorry driver shortages and Brexit-related trade disruptions, according to an industry report. Shop Price […]

Mumbai, Sep 2 : In a massive embarrassment, the Central Bureau of Investigation (CBI) said that it has raided and arrested its own sleuth for allegedly conniving to prepare a 'purported' clean-chit to […]

Panaji, Sep 2 : Ganesh Chaturthi, Goa's most popular Hindu festival, will spell relief to the thousands of Covid warriors engaged in the expansive inoculation drive, with the state government deciding […]