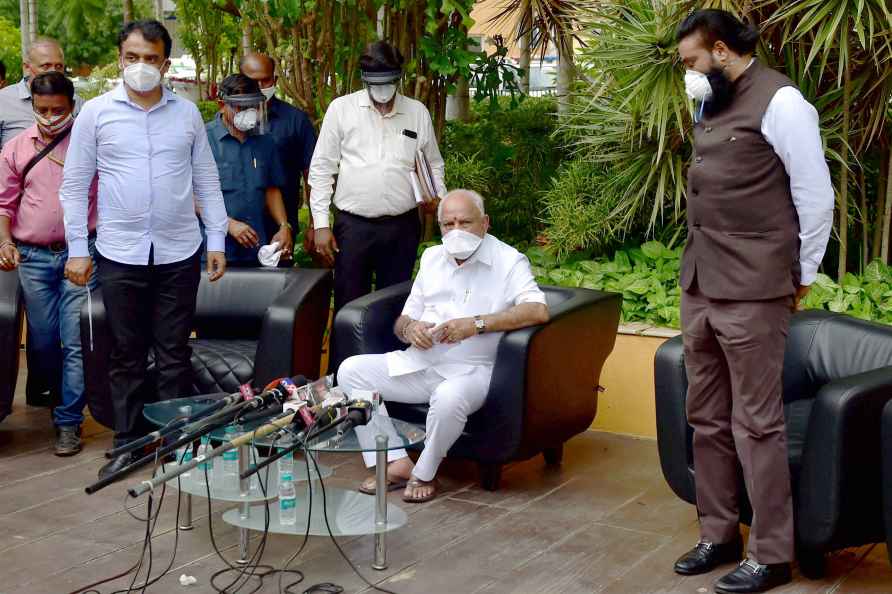 Bengaluru, July 21 : Karnataka Chief Minister B.S. Yediyurappa has called off the scheduled party legislators' meeting to be held on July 25, and instead decided to organise a dinner party on the same day. According to sources, the Chief Minister after getting instructions from the High Command has cancelled the party legislators meeting scheduled a day before the government under the leadership of Yediyurappa completes two years in office. It was expected that he could have made an announcement on his retirement in the meeting. Now, he has arranged a dinner party for BJP legislators and leaders at a private hotel to mark the celebrations on the same day. This development sealed off the possibility of chances on the issue of the new chief minister being discussed in the state. The sources explain, Yediyurappa has successfully exerted pressure on the top brass of the party that he would not budge unless they heed to his demand in case he steps down. Yediyurappa had already announced earlier that he would go to New Delhi in the first week of August and it is expected that, the BJP high command will hold another round of talks with him. However, the sources explain that Yediyurappa is not likely to accept terms and conditions of the top brass. It is said that, BJP leaders are trying to pacify Yediyurappa by offering the post of Deputy Chief Minister to his son B.Y. Vijayendra. But, he is demanding the party president post for his son and a candidate of his choice at the helm in the state. On Tuesday, Veerashaiva-Lingayat religious seers had warned the BJP that it will have no future in the state in case of change of leadership. Meanwhile, Yediyurappa convened a series of meetings of officials in Vidhana Soudha and gave directions to tackle flood situation and landslide incidents in the state. The opposition camp has also gone quiet, sources added. /IANS

Electrocution deaths: A cause of worry for Bengal
Kolkata, Sep 24 : The death of two minor girls -- 13-year-old Anushka Nandi from Bandhab Nagar Colony and 12-year-old Sneha Banik from the Motijheel a

Nobel Prize ceremonies cancelled again over Covid
Stockholm, Sep 24 : Due to the uncertainty of the ongoing Covid-19 pandemic, this year's Nobel Prize laureates will receive their awards in their home

TN to extend doorstep healthcare scheme to urban areas
Chennai, Sep 24 : The highly successful healthcare at the doorstep scheme, 'Makkalai Thedi Maruthuvam', will now be operating in all the urban centres

Islamabad, Sep 24 : The Jamaat-e-Islami (JI) party is readying to hold a nationwide protest across Pakistan on Friday highlighting the governments negligence of the ever-growing unemployment and infla […]

Mysuru (Karnataka), Sep 24 : In a major development in the Mysuru gang rape case, the victim has identified her attackers, a month after the assault, during an identification parade in the district pr […]

MY Tarigami and CITU activists protest

San Francisco, Sep 24 : The Cupertino-based tech giant Apple has started rolling out iOS 12.5.5 to older models of the iPhone and iPad. "This update provides important security updates and is re […]