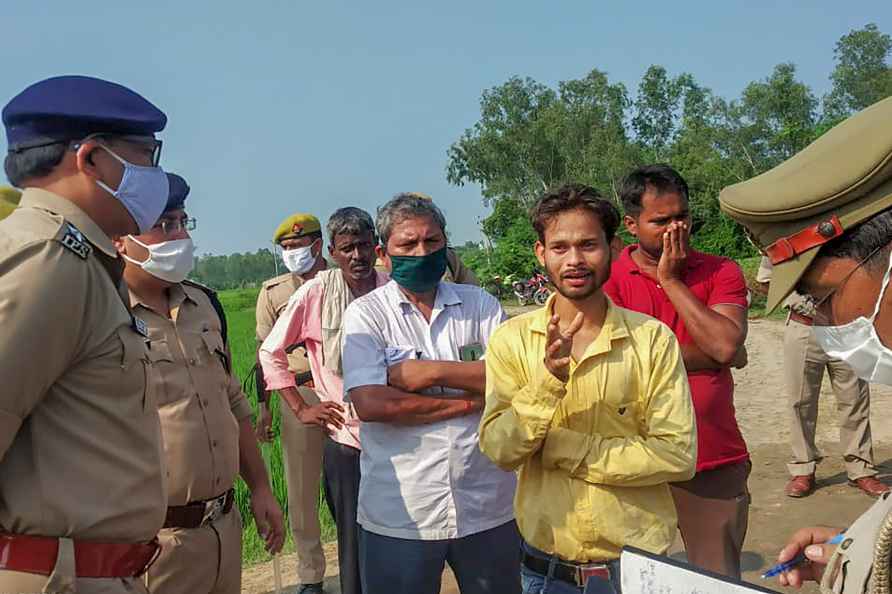 Bijnor (Uttar Pradesh), July 21 : Two Dalit women were attacked allegedly for entering into the field of upper caste men of their village here. One of the attackers has been arrested, police said on Wednesday. The women, aged 65 and 34 years, were attacked with a spade and have been admitted to a government hospital with serious injuries in the neck and head. According to the complaint filed by the victim's family, the accused, Dheere Singh, and one of his relatives, attacked the women and also used caste-based slurs against them when they happened to enter his field in the Mahmoodpur village on Monday. The police were informed and the victims, Sheela Devi and her daughter-in-law Pravesh, were rushed to the district hospital for treatment. Sheela was later referred to Meerut hospital as her condition deteriorated. The main accused, Dheere, was on Tuesday and sent to jail. Bijnor's Superintendent of Police (SP) Dharamveer Singh said, "Police have registered a case against Dheere and his unidentified relative under SC/ST Act. They have also been booked under IPC sections 323 (punishment for voluntarily causing hurt), 324 (voluntarily causing hurt by dangerous weapons or means), 308 (attempt to commit culpable homicide), 504 (intentional insult with intent to provoke breach of the peace)." The case was filed on the basis of a complaint filed by Sheela's daughter Pinki. "During investigation, it was found that both the women had walked into the field of Dheere Singh, who took offence to it. He objected to it and shouted at the women who apparently shouted back at him. Enraged, Dheere and his relative attacked the women. /IANS

[Team Europe's Roger Federer is lifted by fellow players after playing with Rafael Nadal in a Laver Cup doubles match against Team World's Jack Sock and Frances Tiafoe at the O2 arena in London, Frida […]

Democratic Party leader Enrico Letta speaks at the party's final rally ahead of Sunday's election in Rome, Friday, Sept. 23, 2022. Italians vote on Sunday for a new Parliament, and the outcome of ball […]

Fire at factory in Delhi's Narela, no injuries

New Delhi, Sep 23 : A fire broke out at a footwear manufacturing factory in the Narela area of the national capital on Friday, a fire department official said, adding that there were injuries or casua […]