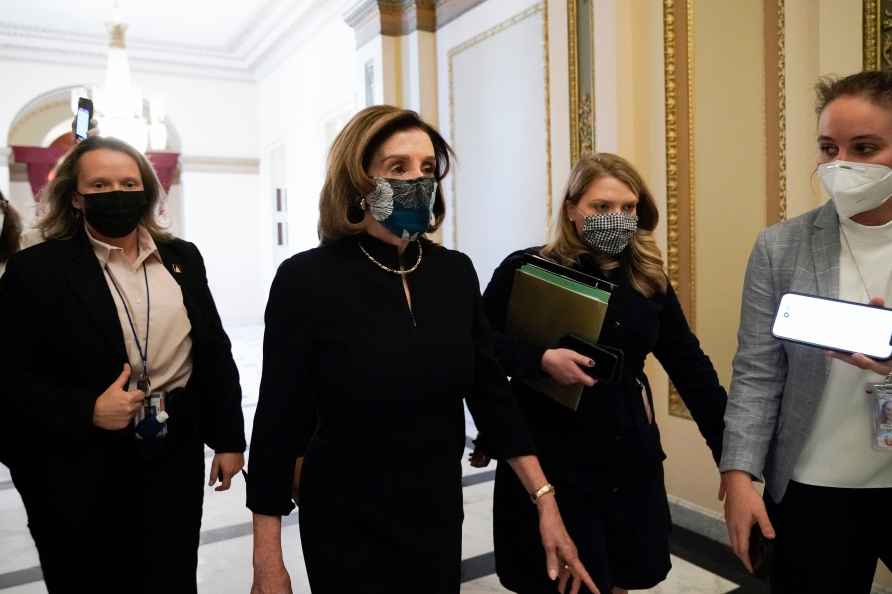 Washington, July 21 : A fully vaccinated White House official tested positive for Covid-19 but was found to have had no close contacts with White House principals or staff, confirmed White House press secretary Jen Psaki on Tuesday. "Yesterday, a fully vaccinated White House official tested positive for Covid-19 off campus. In accordance with our rigorous Covid-19 protocols, the official remains off campus as they wait for confirmatory PCR test," said Psaki during Tuesday's press briefing, confirming earlier local media reports of the breakthrough case. She said that the White House medical unit has conducted contact tracing and interviews, finding no close contact among White House principals, staff or President Joe Biden, the Xinhua news agency reported. There have been other instances of vaccinated employees testing positive, Psaki said, though they were not commissioned officers and therefore were not reported by the administration. "We committed that we would release information proactively if it is commissioned officers," she said. Commissioned officers hold a high-level position where they work for the president, rather than working for another White House official. Asked whether the administration fears that these breakthrough cases will spur more vaccine hesitancy among Americans, Psaki said that she hasn't seen data to indicate this trend. "We know that there will be breakthrough cases, but as this instance shows, cases in vaccinated individuals are typically mild," she said. A senior spokesperson for House of Representatives Speaker Nancy Pelosi has also tested positive after coming into contact with Democrats from the Texas state legislature last week. The spokesperson was fully vaccinated and had no contact with Pelosi since being exposed to the virus, according to the speaker's office. "The entire Press Office is working remotely today with the exception of individuals who have had no exposure to the individual or have had a recent negative test," Drew Hammill, Pelosi's deputy chief of staff, said in a statement on Tuesday. Covid-19 cases are on the rise again in the US as the highly transmissible Delta variant is taking hold and vaccination efforts are stagnating in the country. Biden urged all Americans to remain vigilant in the fight against Covid-19, especially with the rise of the Delta variant, during his second full Cabinet meeting of his administration on Tuesday. "The safest thing to do is to get vaccinated, get vaccinated," said Biden. The Delta variant accounts for more than 83 per cent of Covid-19 cases in the country, said Rochelle Walensky, director of the US Centers for Disease Control and Prevention (CDC) on Tuesday. The pace of vaccinations in the US has dropped sharply in the past few months. Twelve states have yet to vaccinate 40 per cent of their population, CDC data show. About 48.6 per cent of the US population is fully vaccinated against Covid-19, and 56.1 per cent of the population has received at least one shot as of Monday, according to CDC data. On Monday, the American Academy of Pediatrics released new guidance for schools that supports in-person learning and recommends universal masking in schools for everyone over the age of 2. /IANS

Patna, Sep 4 : A Deputy Superintendent of Police (DSP) in Bihar's Madhepura district has got into trouble after an alleged video of a woman pimp went viral on social media. As per the viral vide […]

By Sumi Khan Dhaka, Sep 4 : Prime Minister Sheikh Hasina on Saturday said the priority of her government is to ensure food security with other basic needs of the people considering the global crisi […]