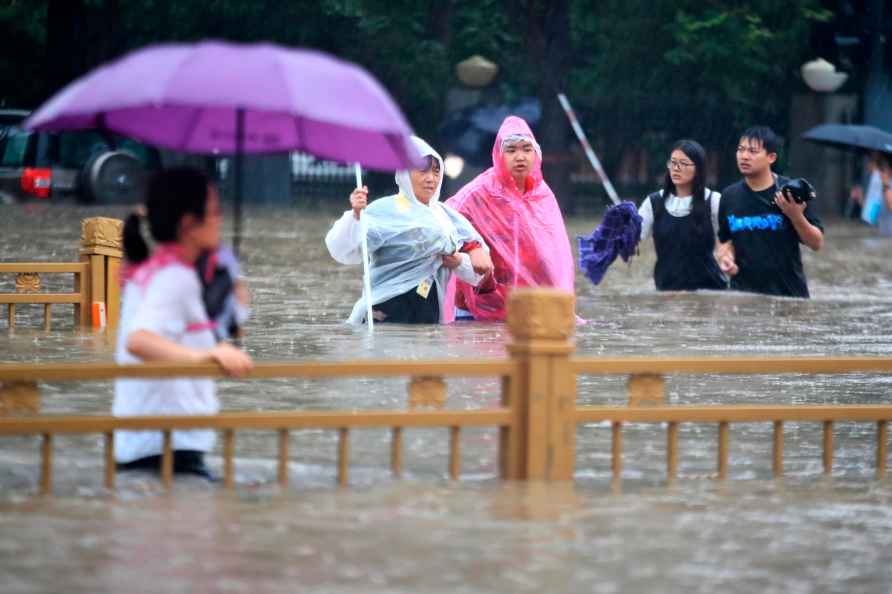 [Zhengzhou : People walk through floodwaters along a street in Zhengzhou in central China's Henan Province, Tuesday, July 20, 2021. China's military has blasted a dam to release floodwaters threatening one of its most heavily populated provinces. The operation late Tuesday night in the city of Luoyang came after several people died in severe flooding in the Henan provincial capital of Zhengzhou, where residents were trapped in the subway system and left stranded at schools, apartments and offices. /PTI] Beijing, July 21 : Massive floods in central China caused by record-breaking rainfall have left at least 12 people dead and more than 100,000 evacuated from their homes, the media reported. More than a dozen cities in China's Henan province, including its provincial capital Zhengzhou, are affected. Footage circulating online show people wading in chest-high levels of water on roads and train stations. President Xi Jinping said on Wednesday the "flood prevention situation was very severe" and at a "critical stage", the BBC reported. He added that the floods had already resulted in "significant loss of life and damage to property", and instructed all departments to prioritise "the safety of people and their property", according to Xinhua news agency. Henan province, home to about 94 million people, has issued its highest level of weather warning. Local authorities called the floods a "once in 100 years" event. The rain began over the weekend, with storms intensifying on Tuesday. By Tuesday night, Zhengzhou and other places in Henan province saw widespread flooding. There were reports online of people swept away by fast-moving floodwaters, and cars and debris drifting down submerged streets. Several dams and reservoirs have breached warning levels, and soldiers have been mobilised to divert rivers which have burst their banks. Flights and train operations in many parts of Henan have also been suspended. Also in Zhengzhou, some 700 passengers have been trapped on a train for at least 40 hours, according to local media reports. Passengers were reportedly provided food at first but this is now said to be in low supply. The First Affiliated Hospital of Zhengzhou Hospital also momentarily lost power on Tuesday night though this has now been restored, said a statement on Weibo by the Zhengzhou Municipal Party Committee. It added that 600 critically ill patients had been transferred to another location. A 20-metre breach has emerged in the dam in Luoyang city after it was damaged by storms, officials said. Soldiers have been deployed to the area and a statement from the army warned it could "collapse at any time". In Zhengzhou, unverified video footage showed passengers in flooded subway carriages with water reaching their shoulders. Rescuers were seen pulling people to safety using rope, while others stood on train seats to try to keep above the water. It is not yet known how many people - if any - remain trapped, but hundreds are reported to have been rescued so far. Many of those affected turned to social media to call for help. One person who went by the name Xiaopei said in a post on microblogging platform Weibo that they were trapped in a train. "The water in the carriage has reached my chest. I can't speak anymore," they said. The fire department later confirmed that they had been rescued. Another user said that residents in Sishui town were stuck on rooftops. "We don't know how to swim... the whole village is about to be washed away," the person wrote. The state media also aired footage of a flooded kindergarten where children were floated out in plastic tubs by rescuers. The floods dominated Chinese social media on Wednesday morning, with many on microblogging platform Weibo praying for the safety of those affected. The hashtags #HenanCanMakeIt and #HenanStormRescue were trending, with close to 1 billion views for each. /IANS

Hussain praises Root for getting it right in Headingley Test
[Leeds: India's Mohammed Shami, center, and teammates celebrate the dismissal of England's Rory Burns during the second day of third test cricket matc

Americans warned to get away from Kabul airport over IS threat
[Kabul: In this satellite photo released by Planet Labs Inc., Kabul's international airport is seen as an evacuation flight taxis to the military side

Mumbai, Aug 26 : Actress Madhoo Shah will be the special guest on dance reality show 'Super Dancer: Chapter 4' for a 'Madhoo Special' episode on Sunday. While all the contestants try to give the […]

New York, Aug 26 : 'Basic Instinct' star Sharon Stone will receive the Golden Icon Award at the 17th Zurich Film Festival. The actress will be honoured with the festival's highest accolade. […]

Bengaluru, Aug 26 : The Karnataka government has decided to set up a 'secondary agriculture directorate' which will work on the processing of food and all agro products. Chief Minister Basavaraj […]

IAF plane with 35 evacuees from Kabul lands at Hindon