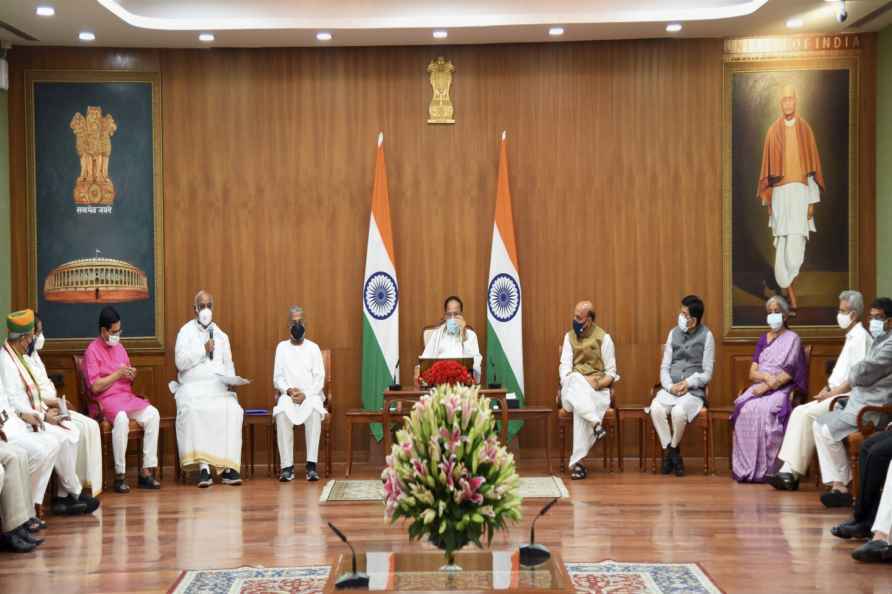 [New Delhi: Vice President and Rajya Sabha Chairman M. Venkaiah Naidu held a meeting with the Leaders of Parties in Rajya Sabha ahead of the commencement of the Monsoon Session of the Parliament, at Upa-Rashtrapati Nivas in New Delhi, July 17, 2021. ( /PTI] Hyderabad, July 17 : Telangana Chief Minister and TRS President K. Chandrasekhar Rao on Friday directed his party MPs to fight for the state's interests in river water sharing during the Parliament session beginning Monday. He presided over Telangana Rashtra Samithi (TRS) Parliamentary Party meeting to discuss the strategy to be adopted during the session. KCR, as the Chief Minister is popularly known, gave direction to the MPs on the issues to be raised in the Parliament. He mentioned several issues. He made it clear to the MPs that as far as the irrigation waters are concerned, no injustice should be meted out to Telangana under any circumstances. He suggested that whenever situation demands, the MPs in both the Lok Sabha and thee Rajya Sabha should fight for the state's rights in river water allocations. KCR also asked the MPs to fight for the pending issues relating to the commitments made by the Centre during the bifurcation of the State. He advised the MPs to submit memoranda to the ministers concerned in this regard. He instructed the MPs to meet the concerned minister to solve the problems with regard to civil supplies. Civil Supplies Minister Gangula Kamalakar, TRS Parliamentary leader Dr K. Keshav Rao, Lok Sabha leader Nama Nageswara Rao, Rajya Sabha members Captain Laxmikanth Rao, J. Santosh Kumar, K.R. Suresh Reddy, B. Prakash, B. Lingaiah Yadav, Lok Sabha members B.B. Patil, P. Ramulu, K. Prabhakar Reddy, G. Ranjit Reddy, P. Dayakar, B. Venkatesh Netha, M. Srinivas Reddy and others attended the meeting. /IANS

Bringing Wood in my place against Bumrah was a mistake: Anderson

Leeds, Aug 25 : England captain Joe Root's decision to remove James Anderson and bring in Mark Wood to rattle Jasprit Bumrah was where England missed the plot and lost the second Test against India at […]

Covid vaccine slot can be booked on WhatsApp now