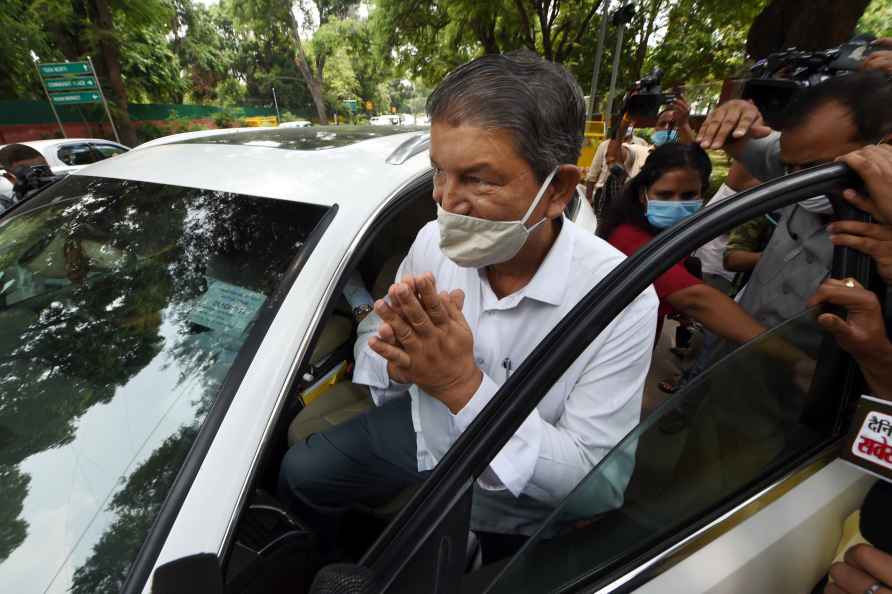 [New Delhi: Congress leader Harish Singh Rawat leaves after meeting party interim President Sonia Gandhi, in New Delhi, Friday, July 16, 2021. ( /PTI] New Delhi, July 16 : With hints of Congress' 'defiant' former Cabinet Minister Navjot Sidhu as the party unit chief months ahead of the Assembly polls in Punjab sparked a row, he reached Congress interim President Sonia Gandhi's residence here on Friday to meet her. The meeting is expected to take place in the presence of state affairs in-charge Harish Rawat. Sidhu, who met some Cabinet ministers and legislators at the residence of Punjab Minister Sukhjinder Singh Randhawa in Chandigarh on Thursday, left for Delhi in the morning for the meeting. Chief Minister Amarinder Singh is learnt to be resistant to the Congress leadership's plan to appoint Sidhu as state Congress chief, replacing Sunil Jakhar. Denying reports of his resignation with the speculations of Sidhu's appointment, the Chief Minister's media advisor Raveen Thukral on Thursday said the former would lead the Congress to victory in the Assembly elections scheduled early next year. "Media reports of CM @capt_amarinder resigning are humbug," Thukral informed in a tweet. "He has neither quit nor offered to do so. He'll lead @INCPunjab to victory in 2022 Assembly polls as he did in 2017. Urge media to stop speculating & spreading misinformation," he added. The speculation of the Chief Minister's resignation came in the wake of Rawat's statement that it may take some time, but to balance the equation in the state, the party is working on a formula to appoint Sidhu in a prominent position, while asserting that Amarinder Singh has already said that he will abide by the party high command's decision. Later, Rawat met Sonia Gandhi and said there was no official announcement on the state President. Meanwhile, Congress MP Manish Tewari on Friday batted for a non-Sikh state president. In an early morning tweet on Friday, Tiwari, who is known for his proximity with the Chief Minister and believed to be the frontrunner for the post, said, "Demographics of Punjab -- Sikhs: 57.75%, Hindus: 38.49%, Dalits: 31:94% (Sikh & Hindus), Punjab is both progressive & Secular..." "...But balancing social interest groups is key to equality," he said, and also added a graph showing the religious composition in Punjab. /IANS

Amarinder may step down, aghast at 'humiliation'
[Chandigarh: Congress leaders Harish Rawat and Navjot Singh Sidhu brief the media after the CLP Meeting was over at Punjab Bhawan in Chandigarh, Satur

Babul Supriyo likely to be sent to Rajya Sabha
[Sanaa: An executioner gestures before he shoots a man convicted of involvement in the killing of a senior Houthi official Saleh al-Samad at Tahrir Sq

'Personal vendetta under PIL cloak': Asthana on challenge to his appointment

New Delhi, Sep 17 : Gujarat-cadre IPS officer Rakesh Asthana has told the Delhi High Court that the PIL challenging his appointment as Delhi Police Commissioner is either "personal vendetta" or a "pro […]