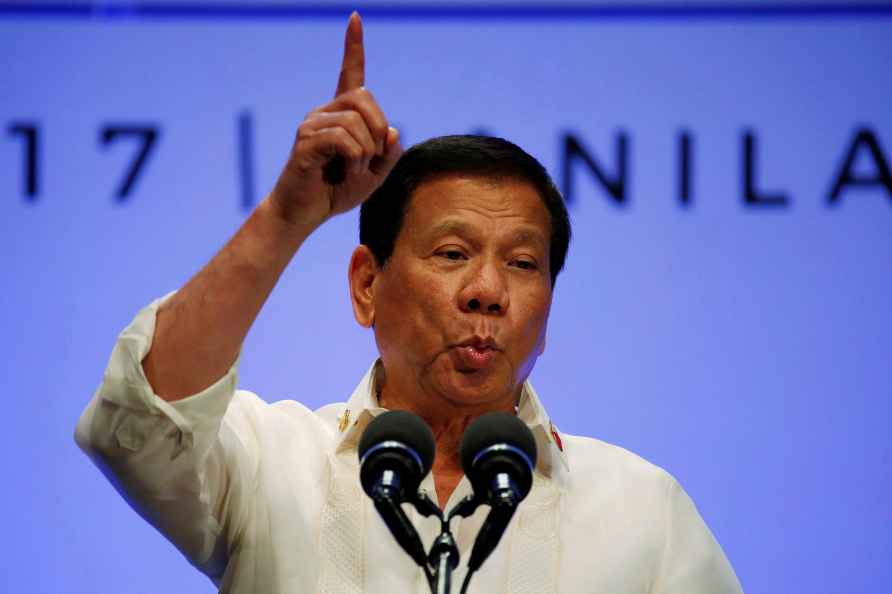 Manila, June 15 : The Philippines on Tuesday rejected a request of the International Criminal Court's (ICC) chief prosecutor to call for a full investigation into alleged crimes against humanity committed by the government in Manila during its anti-drug campaign. Government spokesperson Harry Roque said the move of prosecutor Fatou Bensouda to seek judicial authorisation from the pre-trial of the ICC to investigate President Rodrigo Duterte formally is "legally erroneous and politically motivated", reports Xinhua news agency In a televised press conference, Roque said Duterte will not participate in the investigation. "The President already said that we will not cooperate because we are not a member of the ICC anymore," he said. Roque said the government did not commit crimes against humanity because the law enforcers never targeted civilians in their operations, adding the law enforcers acted in self-defence. Duterte's single six-year presidential term ends on June 30, 2022. "We do not know what the policy will be after 2022. That will be answered by whoever is the next president of the Philippines," Roque added. The Philippines' Department of Foreign Affairs (DFA) said it found the "midnight announcement" of Bensouda "deeply regrettable". The DFA said that Bensouda, whose term ends this week, "undercuts the attractiveness of the Rome Statutes to States" and pre-empts the prerogative of her successor to make a complete evaluation of the cases. The DFA said the Philippine government "has taken concrete and progressive steps to address concerns in the conduct of the anti-illegal drugs campaign". The Philippines officially informed the UN in March 2018 about its decision to withdraw from the Rome Statute of the ICC after the body launched a probe into the alleged extrajudicial killings related to Duterte's anti-drug campaign. Duterte at that time said the ICC accusations are "baseless, unprecedented and outrageous attacks". According to Philippine government data, more than 6,000 people were killed in the war on drugs that Duterte launched after he took office in 2016. /IANS

58 dead in Germany floods
[Berlin: This image provided on Friday, July 16, 2021 by the Cologne district government shows the Blessem district of Erftstadt in Germany. Rescuers

New York, July 15 : US researchers have successfully developed a "speech neuroprosthesis" that has enabled a man with severe paralysis to communicate in sentences, translating signals from his brain t […]

[Berlin: This image provided on Friday, July 16, 2021 by the Cologne district government shows the Blessem district of Erftstadt in Germany. Rescuers were rushing Friday to help people trapped in thei […]

Partial lockdown to continue in Odisha till Aug 1

Bhubaneswar, July 15 : As there is no significant improvement in Covid-19 situation in 10 coastal districts, the Odisha government on Thursday announced extension of the partial lockdown till August 1 […]