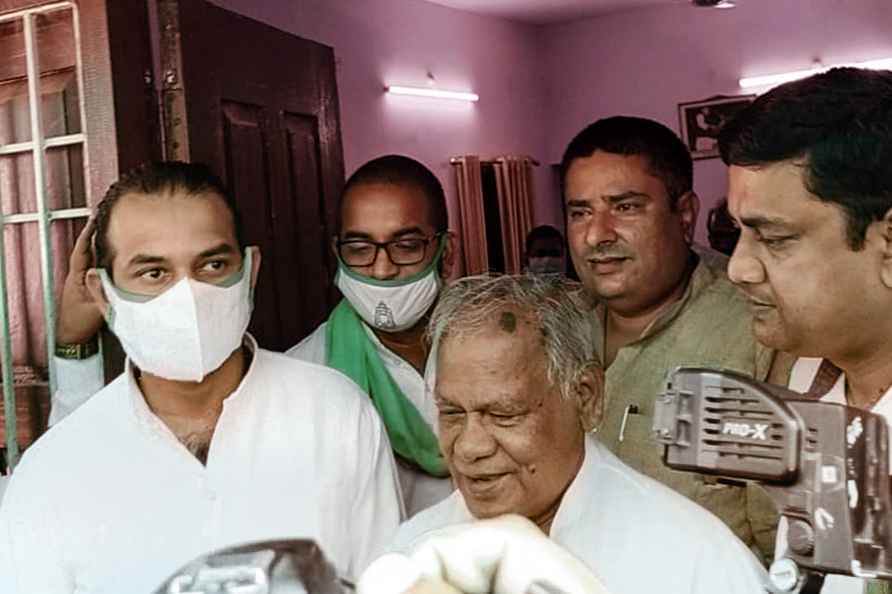 [Patna: HAM(S) President Jitan Ram Manjhi talks to media after a meeting with RJD MLA Tej Pratap Yadav, in Patna, Friday, June 11, 2021. ( /PTI] Patna, June 11 : With the Rashtriya Janata Dal (RJD) celebrating the 74th birthday of party supremo Lalu Prasad on Friday, his elder son Tej Pratap called on former Bihar Chief Minister and Hindustani Awam Morcha (HAM) chief Jitan Ram Manjhi at the latters residence, sparking political speculation. After the meeting which lasted about 40 minutes, Tej Pratap told mediaprsons that the door is open for Manjhi and it is up to the HAM leader to decide whether he wants to join the RJD-led Mahagathbandhan (grand alliance) in Bihar. "I came to uncle's (Manjhi) house to take his blessings," Tej Pratap said. Manjhi, on the other hand, said that there is no question of leaving the NDA. "My party is a part of the NDA led by Nitish Kumar in Bihar. I talked to Tej Pratap about social issues, not political. I am pleased that he came to my house. It is not surprising, as Lalu Prasad and Tejashwi Yadav too had visited my house earlier," Manjhi said. HAM is an alliance partner of the NDA government in Bihar, which is reported to be close to Chief Minister Nitish Kumar. Tej Pratap's comment assumes significance as Manjhi has been critical of the BJP of late. Even on Friday, Manjhi tweeted that the BJP came to power by promising 'Sabka Saath Sabka Vikas', but now the saffron party has only one agenda, which is 'appeasement'. On Thursday, Manjhi and his party had slammed BJP leaders for terming madrasas as hubs of terrorist activities in Bihar, two days after an explosion at a madrasa in Banka district left one imam (religious teacher) dead. Sources have said that the RJD is looking towards Manjhi and his party as a potential alliance partner in the future. /IANS

Berlin, June 11 : The PhD degree of former German Minister for Family Affairs Franziska Giffey had her doctoral was revoked after an investigation into her 2010 doctoral thesis on European politics fo […]