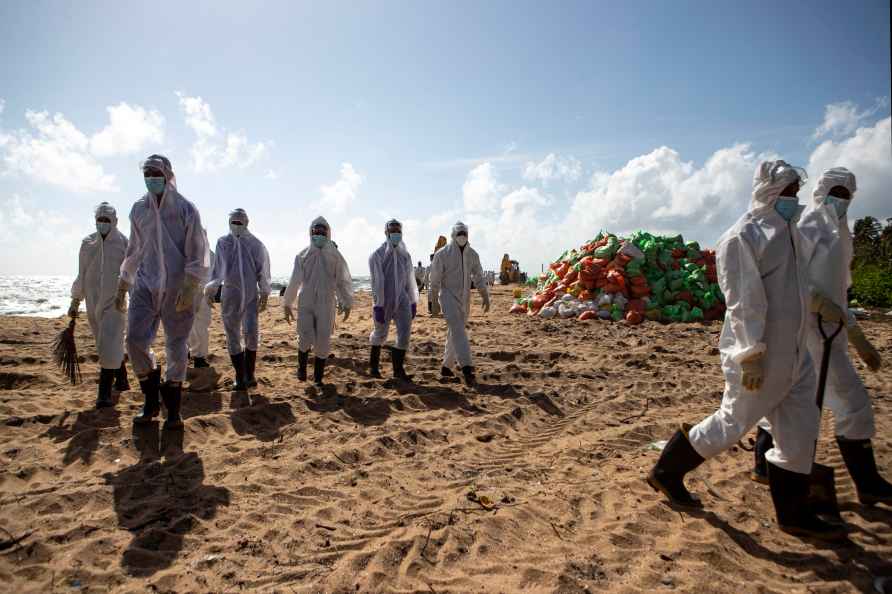 [Kapungoda: Sri Lankan navy soldiers work to collect plastic residue washed ashore from the fire damaged container ship MV X-Press Pearl at Kapungoda, on the outskirts of Colombo, Sri Lanka, Friday, June 11, 2021. Sri Lankan authorities say they have taken water samples to try to determine whether the fire-ravaged cargo ship slowly sinking off the coast is leaking oil. The tests were prompted by satellite images from Planet Labs Inc. that showed a substance that could be oil in the water near the Singapore-flagged ship, which was devastated by a nearly two-week fire before it started sinking last week. /PTI] Colombo, June 11 : Sri Lankan authorities have taken steps to investigate a possible oil leak from the sinking X-Press Pearl ship that caught fire on May 20 while anchoring 9.5 nautical miles off the Colombo harbour, local media reported Friday. Suspicions of a leak were raised after international media showed satellite images of a suspected oil patch around the ship, reports Xinhua news agency. SMinister of Environment Mahinda Amaraweera told the local media that the Chairperson of the Marine Environment Protection Authority (MEPA) informed him that a team from the MEPA has been sent to the ship to investigate and obtain the relevant oil and water samples. The X-Press Feeders, operators of the container ship X-Press Pearl, on Thursday confirmed that the situation on the scene remains under observation with no signs of debris and no confirmed reports of fuel oil pollution. State Minister of Urban Development, Coast Conservation, Waste Disposal and public Sanitation Nalaka Godahewa said that both the Sri Lankan Navy and Indian Coast Guards who had anchored near the ship confirmed that the media reports of an oil spill were incorrect but authorities have dispatched experts to the scene to verify it. The X-Press Pearl, registered under the flag of Singapore and carrying 1,486 containers with 25 tonnes of nitric acid and several other chemicals and cosmetics, departed from the port of Hazira, India on May 15. The vessel sent out a distress call while being close to the Colombo Port on May 20, and soon caught fire. The Sri Lankan Navy then dispatched vessels to bring the fire under control. The MEPA said that the burning of the X-Press Pearl vessel has caused a massive environmental disaster as beaches along the southern and western coast have been damaged due to the debris being washed ashore. The government said a large number of marine life have been killed as a result of the pollution caused by the fire while the Fisheries Department has imposed a temporary ban on fishing from the southern coast to the western coast. /IANS

Punjab Police seize cache of foreign-made pistols from smuggler
[Amritsar: ADGP - Internal Security Rajendra Namdeo Dhoke along with an other officials displays 48 foreign made pistols, magazines and ammunition, re

Not making final in the past tough to deal with: Anastasia

Paris, June 11 : Anastasia Pavlyuchenkova, who reached her first Grand Slam final in 52th attempt after she beat Tamara Zidansek 7-5, 6-3 in the French Open semi-finals, said she found it tough to dea […]