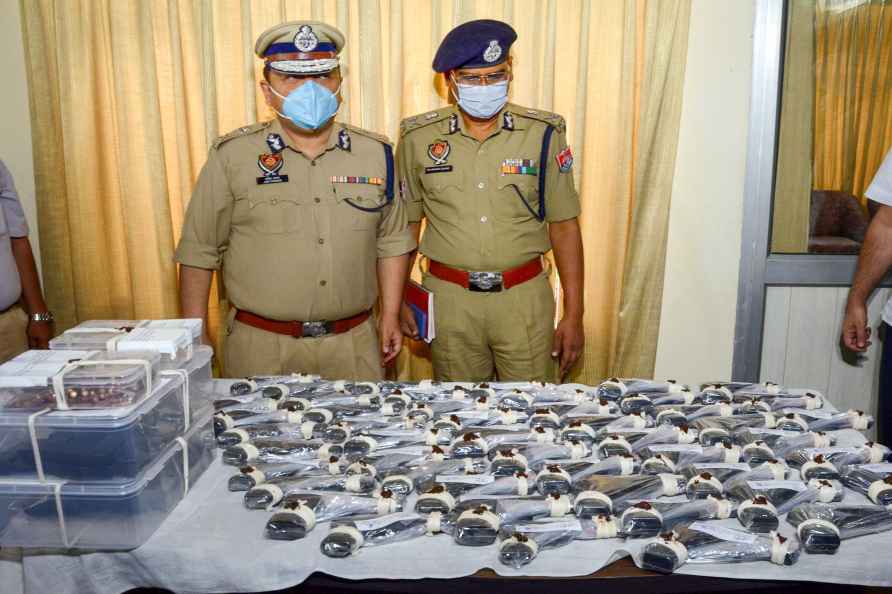 [Amritsar: ADGP - Internal Security Rajendra Namdeo Dhoke along with an other officials displays 48 foreign made pistols, magazines and ammunition, recovered after the arrest of an alleged militant Jagjit Singh on Thursday night by a team of Punjab Internal Security Wing, in Amritsar, Friday, June 11, 2021. ( /PTI] Chandigarh, June 11 : A huge cache of foreign-made pistols has been seized and a smuggler, allegedly linked with Pakistan-based terror outfits and pro-Khalistani elements based in the US, Canada and the UK and operating on directions of a US-based handler, arrested, Punjab's Director General of Police Dinkar Gupta said on Friday. The weapons seized on late Thursday were meant for carrying out terrorist activities in various parts of India, he said. Jagjit Singh, 25, a resident of Batala, was arrested from near Kathunangal village in Amritsar district by a team of the Internal Security Wing, he said. In an intelligence-led operation, the police intercepted a car at a specially laid police barricade on the Amritsar-Batala road in Kathunangal, and found two nylon bags containing 48 foreign made pistols of different foreign makes and bores, along with magazines and ammunition. The cache included 19 Turkish pistols of 9 mm, 37 magazines and 45 rounds; nine Chinese pistols of .30 bore and 22 magazines; 19 pistols of .30 bore (Star mark), 38 magazines and 148 rounds; and one Italian pistol of 9 mm and two magazines. Giving details of the weapons smuggling nexus, the DGP said preliminary investigations had revealed that Jagjit Singh had been directed by Darmanjit Singh, a former gangster, to collect this weapon consignment. Jagjit Singh has been in touch with Darmanjit Singh, who is at present based in the US. During his stay in Dubai from 2017 to December 2020, Jagjit Singh had remained in touch with Darmanjit Singh, who motivated him to work for him. The mastermind of this racket, Darmanjit Singh had reportedly tasked Jagjit Singh to collect and conceal the weapon consignment and wait for further instructions for the delivery of the pistols, said the DGP, adding open-ended warrants against proclaimed offender Darmanjit Singh have been obtained. Darmanjit Singh was involved in various criminal activities in Punjab before his escape to the US in 2017 to evade arrest. He facilitated the escape of notorious gangster Harwinder Singh from police custody in 2017. Punjab Police, which has launched a drive against Pakistan-sponsored terrorist elements, have busted 44 terror modules in the past four years. Besides, 283 terrorists and criminals have been arrested. /IANS

Punjab Police seize cache of foreign-made pistols from smuggler
[Amritsar: ADGP - Internal Security Rajendra Namdeo Dhoke along with an other officials displays 48 foreign made pistols, magazines and ammunition, re

Chennai, June 11 : When parents choose names that are rare and symbolic, children become famous. On Sunday, June 13, Socialism will be tying the knot with Mamata Banerjee and the marriage will b […]

Ajmer: Villagers collect drinking water from a roadside tap during a hot summer day, on the outskirts of Ajmer, Friday, June 11, 2021. ( /PTI […]

[Amritsar: ADGP - Internal Security Rajendra Namdeo Dhoke along with an other officials displays 48 foreign made pistols, magazines and ammunition, recovered after the arrest of an alleged militant Ja […]