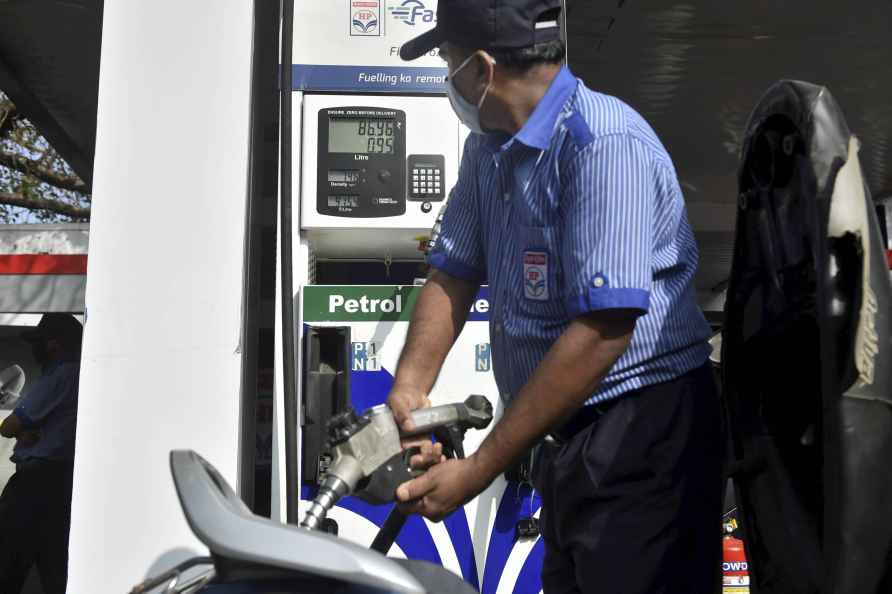 New Delhi, June 11 : The common man continues to face the heat from rising fuel prices as oil marketing companies once again decided to pass on the rise in global oil rates to consumers on Friday. Accordingly, retail price of petrol and diesel got dearer by 29 paisa per litre and 28 paisa per litre to touch new high of Rs 95.85 and Rs 86.75 per litre respectively in Delhi. In the city of Mumbai, where petrol prices crossed Rs 100 mark for the first time ever on May 29, the fuel price reached new high of Rs 102.04 per litre on Friday. Diesel prices also increased in the city to reach Rs 94.15 a litre, the highest among metros. Across the country as well petrol and diesel prices increased between 26-32 paisa per litre on Friday but its retail prices varied depending on the level of local taxes in different states. Sri Ganganagar, a small city in northernmost part of Rajasthan near the India-Pakistan border is all set to get the dubious distinction of becoming the first city in the country where retail prices of both both auto fuels - petrol and diesel - will be hitting the century mark. The city already has the distinction of having the highest pump price of petrol across the country at Rs 106.95 a litre. With diesel prices now increasing there by another 30 paisa per litre on Friday to reach Rs 99.81 a litre, the city is just a day away to hit a century mark for this fuel class as well. Elsewhere in Rajasthan, especially towns near the border areas, diesel is expected to touch Rs 100 mark in a day. So, will be the case in a few places in Madhya Pradesh, Maharashtra, Telangana, Tamil Nadu, Andhra Pradesh, Karnataka and Bihar, where by virtue of higher VAT rates, fuel prices are always much higher than rest of the country. Premium fuels are already above Rs 100 mark in several cities for past few months. With Friday's price hike, fuel prices have now increased on 22 days and remained unchanged on 20 days since May 1. The 22 increases has taken up petrol prices by Rs 5.45 per litre in Delhi. Similarly, diesel have increased by Rs 6.03 per litre in the national capital. With global crude prices also rising on a pick up demand and depleting inventories of worlds largest fuel guzzler - US, retail prices of fuel in India is expected to firm up further in coming days. The benchmark Brent crude is currently at $ 72.23 on ICE or Intercontinental Exchange . /IANS

Fuel prices rise again across the country; petrol costs Rs 102/ltr in Mumbai
New Delhi, June 11 : The common man continues to face the heat from rising fuel prices as oil marketing companies once again decided to pass on the ri

Sensex, Nifty hit record highs
Mumbai, June 11 : The Indian stock market reached new milestones on Friday morning with both the BSE Sensex and the Nifty50 on the National Stock Exch

New Delhi, June 11 : The common man continues to face the heat from rising fuel prices as oil marketing companies once again decided to pass on the rise in global oil rates to consumers on Friday. […]

Warner, Stoinis pull out of The Hundred

London, June 11 : Australian cricketers David Warner and Marcus Stoinis have pulled out of The Hundred dealing a blow to the tournament organised by England and Wales Cricket Board (ECB). The Hu […]

Protest for a separate state in Jammu