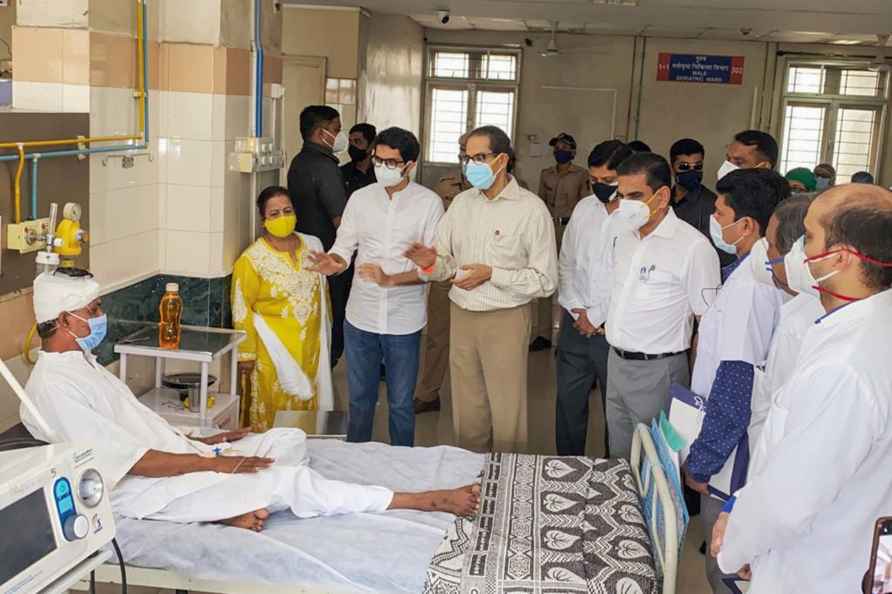 [Mumbai: Maharashtra CM Uddhav Thackeray visits people injured after a single-storey house collapsed on another structure in Malwani area, at Shatabdi Hospital in Mumbai, Thursday, June 10, 2021. At least 8 children and 3 adults died and 7 other people injured in the mishap. ( /PTI] Mumbai, June 10 : Maharashtra Chief Minister Uddhav Thackeray on Thursday afternoon visited the injured victims of last night's house crash in Malad - which claimed 11 lives. The injured are undergoing treatment at Dr BR Ambedkar Shatabdi Hospital in Kandivali, here. Accompanied by Ministers Aslam Sheikh and Aditya Thackeray, Mayor Kishori Pednekar and Municipal Commissioner I.S. Chahal and other officials, the CM enquired after the health of the victims, the course of their treatment and other details with the attending medicos. Thackeray also announced a compensation of Rs 500,000 to kin of each of the deceased 11 persons, mostly minors, who perished in the house collapse - the first major monsoon-related tragedy in Mumbai this year. He added that the government would bear the entire treatment cost of the injured persons. Bharatiya Janata Party's Leader of Opposition (Council) Pravin Darekar visited the crash site and slammed the BrihanMumbai Municipal Corporation (BMC) for laxity in the matter. "The local MP Gopal Shetty had warned in writing to the BMC highlighting the dangers of many of these illegal multi-storied tenements, which posed a huge risk in monsoon. But nothing was done about it," Darekar said. Around 11.30 p.m. on Wednesday, a ground-plus-two storied house crashed and fell on an adjoining tenement in the New Collector's Colony at Malvani, Malad west as the city was clobbered with heavy rains. The tragedy has claimed 11 victims so far, including 9 members of a family with 3 adults. The victims include 8 minors of which one was an 18-month-old female toddler and the oldest 15-year-old boy. Officials claimed that in many slum pockets across the city, local residents construct multi-storied tenements without authorization, some as tall as four or five floors, in places like Bandra, Dharavi, Jogeshwari, Malad, Dahisar and other slums, and ignore demolition notices of the BMC. /IANS

G20 FMs agree to go ahead with global tax reform
[Venice: Children's shoes are displayed on the Degli Scalzi bridge, as a protest against climatic change of the environmental protection movement Exti

Muradiye: Emergency workers emergency workers work through the burnt-out wreckage as others treat wounded survivors by the roadside in Muradiye in Van province, which borders Iran, early Sunday, July […]

G20 FMs agree to go ahead with global tax reform

[Venice: Children's shoes are displayed on the Degli Scalzi bridge, as a protest against climatic change of the environmental protection movement Extinction Rebellion , during a G20 Economy and Financ […]

Rome: Pope Francis appears on a balcony of the Agostino Gemelli ...

Rome: Pope Francis appears on a balcony of the Agostino Gemelli Polyclinic in Rome, Sunday, July 11, 2021, where he is recovering from intestinal surgery, for the traditional Sunday blessing and Angel […]