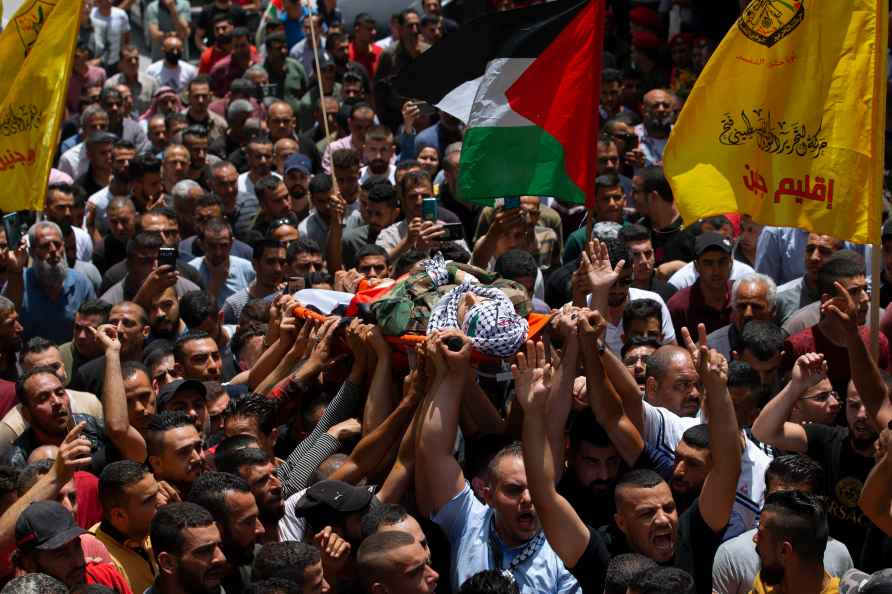 [Jenin: Palestinian mourners carry body of Palestinians security officer, Tayseer Issa, in the West Bank city of Jenin, Thursday, June 10, 2021. Israeli troops shot and killed three Palestinians, including two security officers, in a shootout that erupted in the West Bank town of Jenin during what appeared to be an Israeli arrest raid overnight, Palestinian officials said Thursday. /PTI] Lucknow, June 10 : In a shocking incident, a 28-year-old constable deployed in the security ring of a murder convict, admitted in the Ram Manohar Lohia hospital, shot dead the convict's son from point-blank range at the hospital gate. The deceased, Praveen Singh, 34, slumped to the ground in a pool of blood after the bullet ripped through his skull. The incident took place late on Wednesday evening after which the constable, Ashish Mishra, swiftly changed his uniform, and walked into the nearby Vibhuti Khand police station and surrendered. He had been deployed in the convict's security ring on May 25. During interrogation, Mishra appeared unrepentant and claimed he shot Praveen to protect himself as the convict's son often taunted and even threatened to kill him. The father of the deceased, Dhruv Singh, is undergoing treatment for prostate cancer at the hospital. He was sentenced to life imprisonment on April 16 in a 1997 murder case at Misrikh, Sitapur. Eyewitnesses told the police that there was no immediate provocation or verbal spat that triggered the incident. Commissioner of Lucknow police, D. K. Thakur, who rushed to the crime scene, said the constable's statement was unconvincing and he appeared to be mentally unsound. "Mishra, a resident of Badaun, was recruited in 2016 and has been posted at Sitapur police lines since 2017. We have sought a feedback on the cop's family background, finances and whether he had a history of mental illness with violent bouts. We also asked Sitapur SP to provide details of the convict, Dhruv Singh's family," he told reporters. Four policemen, including a head constable, had been deployed at Ram Manohar Lohia hospital, for the convict's security. "While two constables had rifles on them, Mishra who was on duty did not carry his service weapon. He committed the crime with a country made pistol, which he said, has gone missing," the police official said. Sitapur SP Rakesh Pratap Singh said, "We questioned Mishra's sister on whether he ever displayed suicidal tendencies or had any other psychiatric illness. She said that he was of sound mind. We also spoke to his friends, colleagues and batchmates and they all concurred he was disciplined, sharp, never an alcoholic and had a good attendance record." /IANS

Too much at stake in 2nd Test for England to lose focus: Hussain
[Birmingham: England's Rory Burns, right, and Dom Sibley run between the wickets to score during the first day of the second cricket test match betwee

Folding Pixel with Samsung display likely to release by year-end

Ottawa: An annular solar eclipse rises over construction cranes and the Peace Tower on Parliament Hill in Ottawa on Thursday, June 10, 2021. /AP-PTI […]