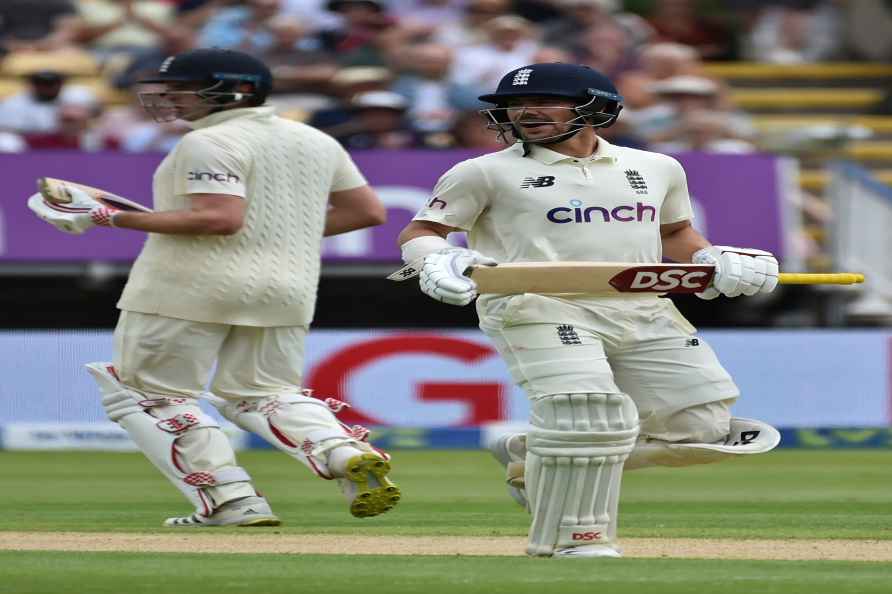 [Birmingham: England's Rory Burns, right, and Dom Sibley run between the wickets to score during the first day of the second cricket test match between England and New Zealand at Edgbaston in Birmingham, England, Thursday, June 10, 2021. /PTI] Birmingham, June 10 : The England cricket team has too much at stake in the second Test against New Zealand to lose focus and get distracted by the Ollie Robinson tweets issue of the first Test, says its former captain Nasser Hussain. The second Test began at Edgbaston here on Thursday. The first match had ended in a draw. "I have no doubt that England's cricketers will be able to focus on the matter at hand at Edgbaston -- winning a Test series against New Zealand," Hussain wrote in a column in Daily Mail. "Yes, they have had a lot to deal with since the Ollie Robinson tweets emerged. But these guys are professionals and there's too much at stake from a cricketing point of view for them to be distracted. There are places to play for and five-Test series against India and Australia on the horizon," he said. Hussain expects Root to not to carry the tweet controversy surrounding pacer Robinson in the first Test into the second one. "I don't for one minute expect Joe Root to carry the troubles of the last few days into the game," he wrote. "I know from experience that off-field matters can be a burden when you're captain. My team spent a lot of the 2003 World Cup dealing with whether we should play Zimbabwe because of human-rights abuses there. But I was nearing the end of my time in the job and I was running out of fuel." Root, however, is not at the end of his captaincy career, pointed out Hussain. "Root is not at that stage as a leader. He's only 30, it's the start of the summer and England are about to play at one of their favourite venues in front of 17,000 fans. Jimmy Anderson is set to become England's most-capped player. Above all, the captain will be excited," he said. "One of the keys as leader is to have a clear mind about the cricketing decisions you need to make. Root's focus will very much be on what kind of team he wants against a New Zealand side missing their skipper Kane Williamson and who may have one eye on next week's World Test Championship final against India." Pacer Robinson made his Test debut in the first Test at Lord's last week. Simultaneously, some of his 2012 and 2013 tweets, full of racists and sexist connotations, surfaced. Although he took seven wickets in the first Test, the England and Wales Cricket Board suspended him and initiated a disciplinary investigation. On Thursday, England won the toss and elected to bat in the second Test against a New Zealand team that made six changes to the XI that played the first Test last week. /IANS

Too much at stake in 2nd Test for England to lose focus: Hussain
[Birmingham: England's Rory Burns, right, and Dom Sibley run between the wickets to score during the first day of the second cricket test match betwee

NZ stand-in captain Latham eyes historic win at Edgbaston
[Birmingham: New Zealand players line up at the start of the first day of the second cricket test between England and New Zealand at Edgbaston in Birm

China-based hackers luring Indians into fake Tata Motors scam
[Moscow: In this photo provided by Russian Interior Ministry, a Russian police officer stands near the bus which crashed into a bus stop in the town o

Too much at stake in 2nd Test for England to lose focus: Hussain

[Birmingham: England's Rory Burns, right, and Dom Sibley run between the wickets to score during the first day of the second cricket test match between England and New Zealand at Edgbaston in Birmingh […]

Sydney, June 9 : Spinner Ashton Agar, who is part of Australia's 23-member preliminary squad for tour of the West Indies, said he is not surprised at news of players likely to pull out and has asked C […]

New Delhi, June 9 : Delhi University (DU) has written a letter asking social media app Telegram to shut down a specific group on the app through which students were being allegedly told the answers to […]