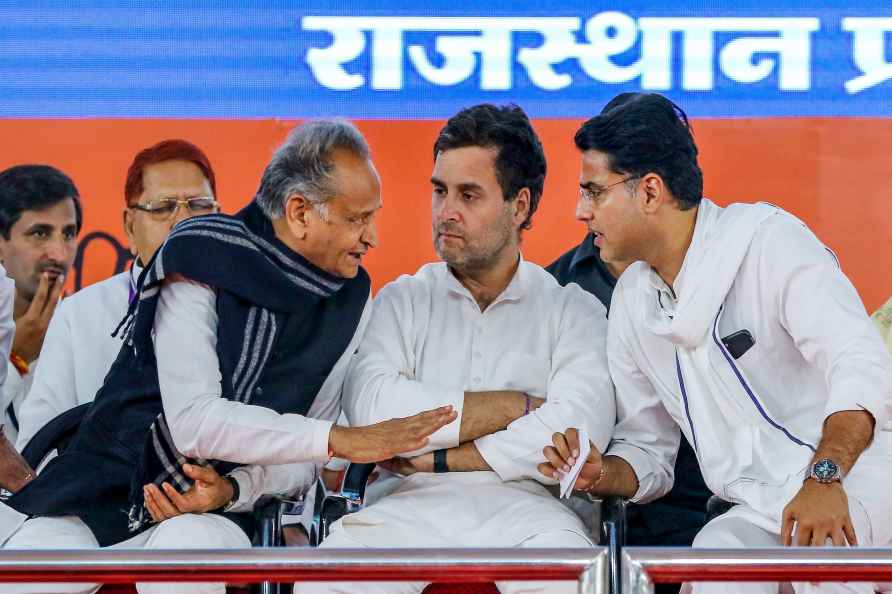 By Archana Sharma Jaipur, June 8 : The Congress high command's stoic silence over the growing signs of discord within the Gehlot government has raised many questions; is this silence deliberate or else the high command is quiet aiming at certain goals? Whatever the truth, the reality is that it has not led to a resolution of differences between different factions simmering in the Congress camp and the fortunes of the party as well as the party workers hang in the balance. Six-time MLA Hemaram Choudhary resigned from the Congress government on May 22 and he seems reluctant to withdraw his resignation. Another MLA, Ved Prakash Solanki, has threatened to resign. Both are aligned to former state Congress chief and ex deputy Chief Minister Sachin Pilot's group. Meanwhile, the Gehlot camp is seen to be busy poaching MLAs from his arch-rival Pilot's camp. Inderaj Gujar and PR Meena are two such MLAs from the Pilot camp who recently praised Chief Minister Ashok Gehlot's work at a time when other Pilot followers were questioning the government's work. The story of discord doesn't end here as two ministers considered to be very close to Gehlot had also reportedly had an altercation during a recent cabinet meeting. In a sense, differences are no longer between Gehlot and his former deputy. This is an internecine war -- a fight among the Gehlot camp followers who look like competitors, not colleagues. The state unit of the Congress, the Pradesh Congress Committee, appears weak on the ground, working with a 39-member team since July last year as all local Congress committees were dissolved following Pilot's open rebellion against the state leadership. Partymen, anxious on the phone tapping front, are aggrieved that they did not get their share as award for victory -- while what were deemed to be political appointments were going to retired former top bureaucrats. There are questions partymen are asking: Why has Kumar Vishwas's wife been given a political appointment in Rajasthan -- considering Vishwas had contested against Rahul Gandhi in Amethi? Why had he been rewarded? Why were retired bureaucrats being appointed to key political posts while party workers who had worked hard for the party were yet to be rewarded? A minister explained that political appointments are being delayed for fear of another rebellion. "If we give 10 workers a position, the remaining 90 will throw tantrums and there can be another rebellion which we can't handle now amid the pandemic," he said. The rival camp in the Congress does not agree. "Post the rebellion in the party, we were asked to compromise on the leadership issue and we followed all rules of the game. We did not say anything against the party. But now, it has been 11 months since a committee was formed to look into our issues and this committee has failed to bring in results. Don't you think the committee should be dissolved? Why isn't the high command looking into the issue," said a Pilot camp follower. In July last year, a three-member committee was formed with veteran leaders Ahmed Patel, K.C. Venugopal and Ajay Maken to look into the grievances of the Pilot camp. Patel passed away, but the other two members of the committee have not been proactive in resolving workers' grievances, said another worker. "If any committee is formed with the aim of fulfilling certain exceptions and commitments and if nothing comes out of it even after 11 months and no one is ready to look into it, it is clear that you are asking for trouble," said the party worker. Meanwhile, state PCC chief Govind Singh Dotasara told IANS that the party is committed to giving political appointments once matters settle down post the second wave of Covid. Rajasthan in-charge Ajay Maken had confirmed announcing political appointments earlier in December last year and then in March, but it could not be implemented. Pilot says there is no reason for delay in appointments and cabinet expansion as of now. Meanwhile, all eyes are set ito see f the High Command pitches in to address these issues or else new factions appearing in the party each year are ringing alarm bells for the Congress which is facing testing times in other states like Punjab too! /IANS

No change: Amarinder to remain Punjab CM
New Delhi, June 8 : With the party panel for Punjab set to submit its reports on the political turmoil in the state, sources say that it may not recom

R'sthan arranges highest number of e-meets for prisoners with kin during lockdown
By Archana Sharma Jaipur, June 8 : The pandemic blues have failed to stop Rajasthan prisoners from meeting their families as the jail administratio

Why is Congress high command silent on rising signs of discord in Rajasthan?

By Archana Sharma Jaipur, June 8 : The Congress high command's stoic silence over the growing signs of discord within the Gehlot government has raised many questions; is this silence deliberate or […]

New Delhi, June 8 : With the party panel for Punjab set to submit its reports on the political turmoil in the state, sources say that it may not recommend removal of Chief Minister Amarinder Singh and […]

San Francisco, June 8 : After default and custom wallpapers, Google Meet is now rolling out support for video backgrounds that are first coming to the web this month and then to mobile "in the coming […]

New Delhi, June 8 : Central banks continue to be positive on gold and around 21 per cent of the central banks around the globe intend to increase their gold reserves over the next 12 months, according […]