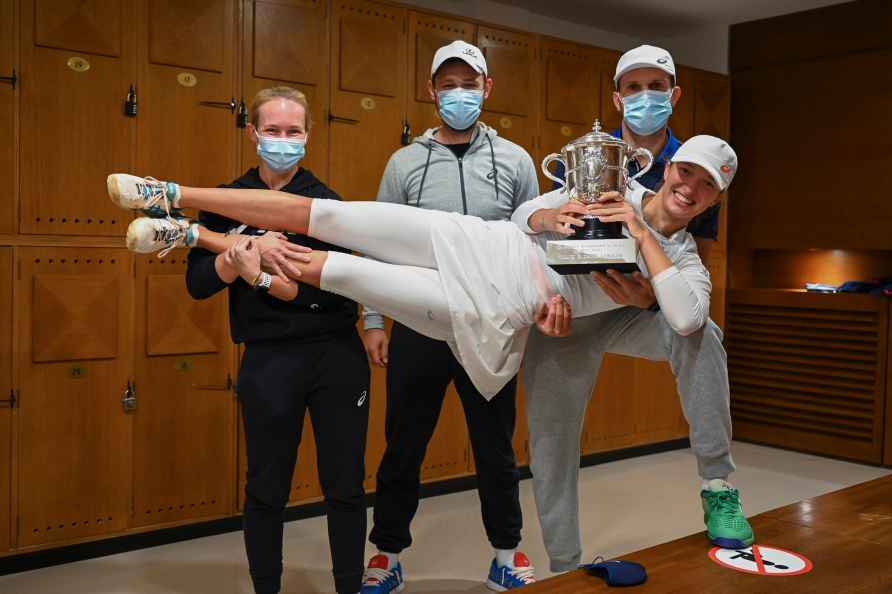 Paris, June 5 : Fifth seed Stefanis Tsitsipas came back after losing first set to beat John Isner 5-7, 6-3, 7-6(3), 6-1 and enter fourth round of French Open late on Friday at Roland Garros. Spanish Pablo Carreno Busta beat American Steve Johnson 6-4, 6-4, 6-2 to also progress. Tsitsipas, a semi-finalist last year, won the match against Isner in two hours and 38 minutes. The six-feet-10-inch American smashed 19 aces against eight by Greek Tsitsipas and committed less double faults -- one against five. However, Tsitsipas won 86% of the points on first serve against 77% by Isner and converted three of the seven break-points he got. Isner, on the other hand, could convert only one out of four break-points. Isner was flawless in the first set as he dropped only five points across six service games. He won three of those six games to love. While both proceeded evenly-matched to 5-5, the American broke late in the first set which he eventually sealed with an ace. However, Isner was off the mark with his first serve on multiple occasions in second set, letting Tsitsipas take advantage. Tsitsipas saved a break at 3-3 before breaking Isner in the next game. From there, he never looked back. Busta had it easy against American Johnson as the Spanish sealed a straight-set win. Busta converted five of the nine break-points he got as against one out of six by Johnson. The 12th seed Busta's first-service win percentage was also a shade better than Johnson's. /IANS

Jelena, Anastasija stretched before securing 3rd round Wimbledon berths
London, July 2 : Former French Open champion Jelena Ostapenko of Latvia got the better of No.31 seed Daria Kasatkina of Russia 6-1, 3-6, 8-6 in one ho

Wimbledon: Federer, Zverev advance; Nishikori, Dimitrov ousted
London, July 2 : Eight-time champion Roger Federer advanced to the third round at Wimbledon with ease, getting the better of Richard Gasquet of France

Mumbai, July 5 : The healthy growth in exports during the April-June quarter notwithstanding, the country's current account deficit could see a big turn in FY22, changing from a surplus position in Co […]

Kolkata, July 5 : With the number of active cases coming down below 1,500 per day and the number of deaths below 30 for the last seven days, there has been marked improvement in the Covid situation in […]

PM Modi speaks on phone to Dalai Lama to convey greetings on his 86th birthday.

PM Modi speaks on phone to Dalai Lama to convey greetings on his 86th birthday. […]