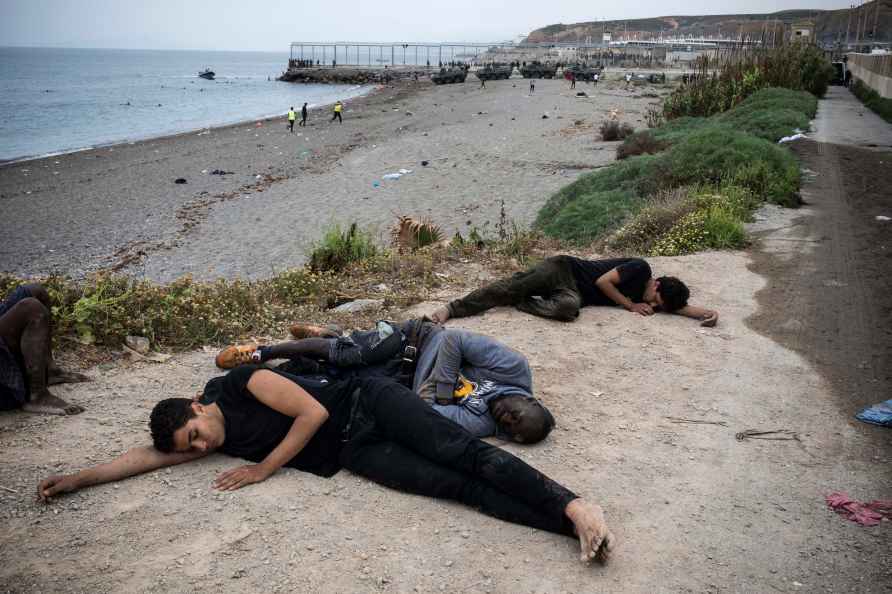 [Ceuta: Men lie on the ground after arriving in the Spanish territory at the border of Morocco and Spain, at the Spanish enclave of Ceuta, on Tuesday, May 18, 2021. Ceuta, a Spanish city of 85,000 in northern Africa, faces a humanitarian crisis after thousands of Moroccans took advantage of relaxed border control in their country to swim or paddle in inflatable boats into European soil. Around 6,000 people had crossed by Tuesday morning since the first arrivals began in the early hours of Monday, including 1,500 who are presumed to be teenagers. /PTI] Rome, May 18 : Italian Prime Minister Mario Draghi's cabinet has decided to postpone the anti-coronavirus night curfew and approved a plan for further reopening, while pandemic trends in the country remained positive. After a cabinet meeting late Monday, the government declared the curfew would be in force from 11 p.m., instead of 10 p.m., until 5 a.m. starting from Tuesday, reports Xinhua news agency. The restrictive measure will be further delayed to midnight by June 7, and fully scrapped from June 21, provided the curve of the infections remained stable. As for the activities currently restricted, the cabinet approved an official timing road map, which will be specifically implemented through a specific decree in the next few days. It said that shopping malls and markets could remain open also on weekends starting from May 22, while betting shops and casinos could restart working from June 1. Fans will be allowed to attend all outdoor sports events up to 25 per cent of the venue's usual capacity starting from June 1, and indoor events from July 1. Indoor and outdoor discos will remain closed for now, according to the new plan, but holding wedding parties will be allowed again from June 15 on, provided all attendees could show a negative test result or a coronavirus vaccine certification. On the same date, theme parks will resume their activity. Among other rules, bars and restaurants, currently operating outdoor only, will be allowed to serve clients indoors again from 5 a.m. to 6 p.m. starting from June 1. The government's decision came as the country counted 3,455 new coronavirus cases in the past 24 hours, according to the Health Ministry. Overall, the main pandemic indicators here have kept improving in the three weeks following the last easing of coronavirus restrictions. Some 19 out of 20 regions were currently in the "yellow zone" denoting a low risk of contagion within the four-tiered system implemented in the country, and only northern Aosta Valley was in the "orange zone" (medium risk). On Monday, the cabinet decided that three regions (Friuli Venezia Giulia, Molise, and Sardinia) will move into the "white zone" (lowest risk) by June 1, and three further ones (Veneto, Liguria, and Abruzzo) would follow by June 7. In the white zone, no restrictions are put in place, not even the night curfew, but people are still required to wear face masks and keep social distance. As of Tuesday morning, the country's overall caseload and death toll stood at 4,162,576 and 124,296. Meanwhile, over 27.7 million vaccine doses have been administered in the country, and the total number of people fully immunised after receiving the two doses grew to more than 8.7 million, or 14.83 per cent of the overall population, according to the Health Ministry. /IANS

Biden and Putin praise Geneva summit talks but discord remains
Geneva, June 17 : The Presidents of the US and Russia have praised their talks in Geneva but have made little concrete progress at the first such meet