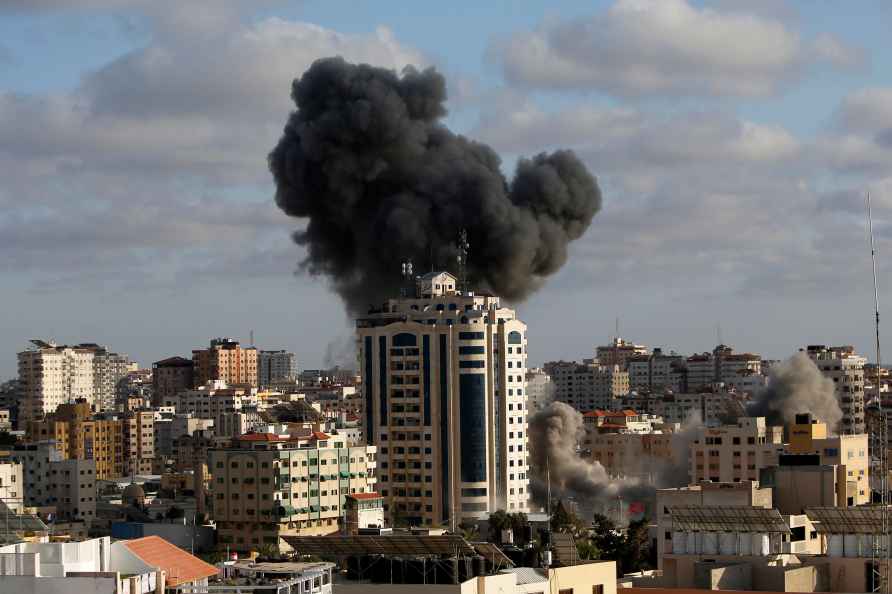 [Gaza City : CORRECTS THE DATE AND BUILDING INFORMATION - An Israeli air strike hits a building in Gaza City, Monday, May 17, 2021. The Israeli military unleashed a wave of heavy airstrikes Monday on the Gaza Strip, saying it destroyed 15 kilometers (9 miles) of militant tunnels and the homes of nine Hamas commanders as international diplomats worked to end the weeklong war that has killed hundreds of people. /PTI] United Nations, May 18 : At least 208 people have been killed and some 1,500 others injured in a week of the ongoing airstrikes and rocket shellings between Israeli troops and Palestinian militants in the Gaza Strip, according to the UN Office for the Coordination of Humanitarian Affairs (OCHA). The Gaza Ministry of Health reported on Monday that 198 people died, including 58 children, and 1,300 injured in seven days of bombardments by Israel, Xinhua news agency quoted the OCHA as saying. Meanwhile, Israel reported 10 fatalities and hundreds more injured by Palestinian rocket attacks launched from Gaza. Concentrating its report on the toll to Palestinians, the OCHA said more than 42,000 displaced people are seeking protection in 50 schools across Gaza operated by the UN agency for Palestinian refugees known as UNRWA. Citing the Gaza Ministry of Public Works and Housing, OCHA reported 94 buildings destroyed and 285 housing units severely damaged and rendered uninhabitable. The humanitarian partner Shelter Cluster reported more than 2,500 people homeless. Damaged structures include 41 education facilities, schools, kindergartens, a UNRWA vocational training centre, the Ministry of Education directorate and a higher education facility, the world organisation said. Additionally, four Ministry of Health hospitals, two non-governmental hospitals, two clinics, a health centre and a Palestine Red Crescent Society also were damaged. Electricity across Gaza is down to six to eight hours a day, on average, with some feeder lines not functioning, disrupting the provision of health care and other essential services, including water, hygiene and sanitation, OCHA said. Food and cash support needs are increasing. The UN and humanitarian partners provide food and non-food items to displaced families in Gaza and immediate cash assistance to more than 52,000 people. They also provide remote psychosocial counselling sessions for the traumatized, increase awareness about the heightened risk of explosive remnants of war and assess property damage. The UN Office of the High Commissioner for Human Rights said that some recent Israeli airstrikes, particularly on high-rise buildings, are raising concerns of indiscriminate and disproportionate attacks under international humanitarian law. Likewise, the launching of rockets and mortars from highly populated civilian neighbourhoods in Gaza into civilian population centers in Israel also may be unlawful. In the West Bank, including East Jerusalem, widespread demonstrations and clashes between Palestinians and Israeli forces broke out in multiple locations in commemoration of Nakba Day on May 15, OCHA said. Two Palestinians were shot and killed by Israeli forces. Another boy died after having been shot four days previously in Hebron by Israeli forces. /IANS

Biden and Putin praise Geneva summit talks but discord remains
Geneva, June 17 : The Presidents of the US and Russia have praised their talks in Geneva but have made little concrete progress at the first such meet

Rupee slumps 33 paise to 73.65 against US dollar in early trade.

Jiuquan : A Long March-2F Y12 rocket carrying a crew of Chinese astronauts in a Shenzhou-12 spaceship lifts off at the Jiuquan Satellite Launch Center in Jiuquan in northwestern China, Thursday, June […]

Jiuquan : Chinese astronauts, from left, Tang Hongbo, Nie Haisheng, and Liu Boming wave as they prepare to board for liftoff at the Jiuquan Satellite Launch Center in Jiuquan in northwestern China, Th […]