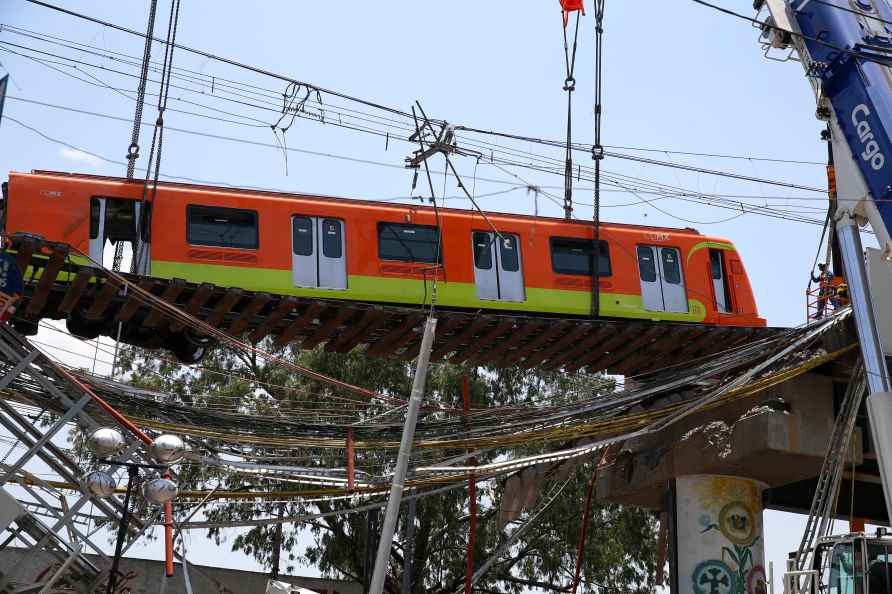 [Mexico City : A subway car is prepared to be lowered to the ground, with the help of a crane, from a collapsed elevated section of the metro, in Mexico City, Tuesday, May 4, 2021. The elevated section of the Line 12 metro collapsed late Monday, killing at least 23 people and injuring at least 79, city officials said. /PTI] By Khurram Habib New Delhi, May 4 : The Indian Premier League (IPL) 2021 was on Tuesday postponed indefinitely after at least four of the eight franchises reported positive Covid-19 cases of players/officials and "weren't that keen on continuing", leaving the Indian cricket board with no option but to stop it amid rapidly escalating pandemic in the country. At least half of the eight franchises -- Kolkata Knight Riders (KKR), SunRisers Hyderabad (SRH), Chennai Super Kings (CSK), and Delhi Capitals (DC) Â? had confirmed that players/officials have tested positive by Tuesday night. A red-faced Board of Control for Cricket in India (BCCI), which has been staunchly defending the IPL's continuation as the country reeled under the Covid-19 massive onslaught, was left with no option but to postponed it when the teams got impacted. The postponement of the IPL at the halfway stage Â? 29 of the 60 matches were played -- may have a big impact on the T20 World Cup, scheduled to be played in India in October-November. The United Arab Emirates is the alternate venue for the T20 World Cup. The BCCI is now facing the pressure of looking for a window after a few of the franchises on Tuesday expressed their unwillingness to continue playing the tournament. The BCCI had to call off the IPL on Tuesday after it emerged SRH's Wriddhiman Saha in Delhi and DC's Amit Mishra in Ahmedabad tested positive. Michael Hussey, a member of the CSK coaching staff, also reportedly tested positive twice on Tuesday in Delhi. On Monday, CSK bowling coach Laxmipathy Balaji and a member of the "travel support staff" and KKR bowlers Varun Chakravarthy and Sandeep Warrier had tested positive along with a few members of the ground staff at the Arun Jaitley Stadium in Delhi. That forced three teams -- KKR, CSK and DC -- to go into isolation. However, more positive cases on Tuesday and SRH also getting affected made it impossible for the league to continue. "The IPL Governing Council and BCCI in an emergency meeting has unanimously decided to postpone IPL 2021 season, with immediate effect," said a BCCI statement on Tuesday. BCCI vice-president Rajeev Shukla said that some franchises were not keen on playing after the deadly virus penetrated the supposedly secure IPL bio-bubble. "Some of the franchises weren't that keen on continuing and left the decision to us," Shukla told IANS on Tuesday. While the IPL teams unaffected by the Covid-19 have already started leaving or, in some cases, are prepared to leave the bio-bubble in a day or two, the affected teams have to be cautious. RCB, Rajasthan Royals (RR), Punjab Kings, and Mumbai Indians (MI) are the teams that haven't been affected by Covid-19. Shukla though said that the BCCI has given the green signal to all the unaffected players to leave. "Those players who have not tested positive can leave. There is no bar on them even if they come from unaffected teams," he said. A massive question, however, rests on the status of foreign players, especially the Australians. While the New Zealand players will most likely fly to England and South African players return to their country and undergo quarantine at home, the Aussies are in a soup. The Australian government has banned flights from India to the country till May 15. It means that the Aussie players will either have to go to a third country, like Maldives, where Aussie commentator Michael Slater as chosen to go, or England and serve quarantine before they proceed to their home country. The IPL won't be able to resume anytime soon, as a window for it is likely to be an issue. There is speculation over the September window, between India's Tests in England and the T20 World Cup in October-November, being available. However, Shukla said it is too early to decide on the dates and venue of the remainder of the IPL. Another option is holding it immediately after the T20 World Cup. All that would, however, depend on the Covid-19 situation not only in India but also in countries whose players are part of the IPL franchises. The BCCI in its Tuesday's statement said that it would help players leave India through a secure passage. "The BCCI will do everything in its powers to arrange for the secure and safe passage of all the participants in IPL," it said. "The BCCI does not want to compromise on the safety of the players, support staff and the other participants involved in organising the IPL. This decision was taken keeping the safety, health and wellbeing of all the stakeholders in mind." The BCCI finally admitted that these are indeed "difficult times". "These are difficult times, especially in India and while we have tried to bring in some positivity and cheer, however, it is imperative that the tournament is now suspended and everyone goes back to their families and loved ones in these trying times," it said in the statement. With the cancellation of IPL, the action now shifts to international cricket. England and New Zealand play a Test series from June 2-14. The early end of IPL will mean that England's IPL players like Jos Buttler, Sam Curran and Chris Woakes will be available for that series. And so would be New Zealand's Trent Boult, Kane Williamson and Mitchell Santner. /IANS

IPL bio-bubble bursts, several Covid+ results force postponement
[Mexico City : A subway car is prepared to be lowered to the ground, with the help of a crane, from a collapsed elevated section of the metro, in Mexi

US forces in Afghanistan hand over base
[Camp Anthonic: A U.S. flag is lowered as American and Afghan soldiers attend a handover ceremony from the U.S. Army to the Afghan National Army, at C

Corona curfew extended in 4 J&K districts till May 10
[Jammu: J&K Lieutenant Governor Manoj Sinha during a meeting in Jammu on Tuesday, May 4,2021. In view of the trend in Covid positive cases, the posit

Washington : President Joe Biden takes questions from reporters as he speaks about the COVID-19 vaccination program, in the State Dining Room of the White House, Tuesday, May 4, 2021, in Washington. […]

United Nations, May 4 : The UN Security Council condemned "in the strongest terms" the terror attack in Afghanistan's Logar province on April 30 that killed at least 26 people and injured 71 others. […]

[Mexico City : A subway car is prepared to be lowered to the ground, with the help of a crane, from a collapsed elevated section of the metro, in Mexico City, Tuesday, May 4, 2021. The elevated sectio […]

Moscow : Russian military vehicles roll along Tverskaya street toward Red Square during a rehearsal for the Victory Day military parade in Moscow, Russia, Tuesday, May 4, 2021. The parade will take pl […]