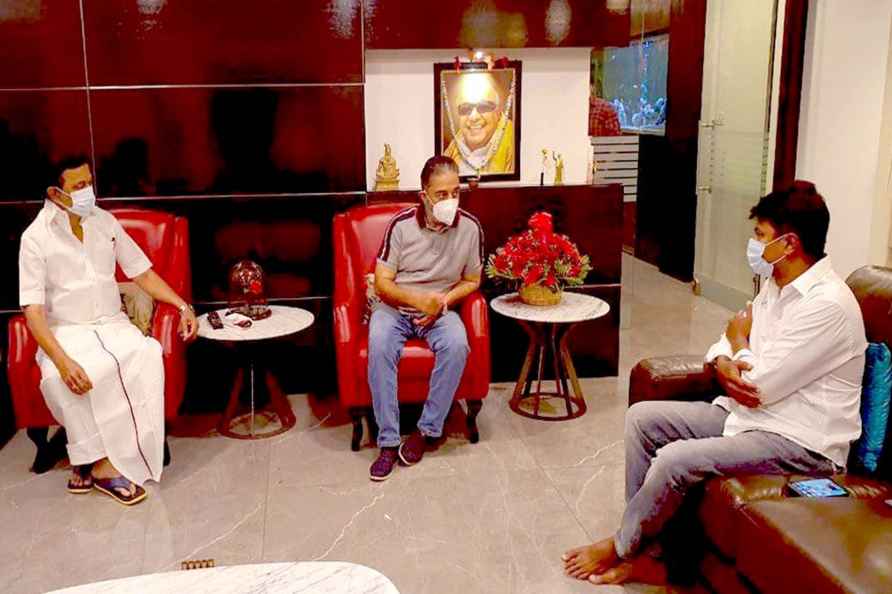 [Chennai: Makkal Needhi Maiam (MNM) President Kamal Haasan meets with DMK chief and election Tamil Nadu Chief Minister MK Stalin and his son Udhayanidhi Stalin at his residence, in Chennai, Tuesday, May 4, 2021. ( /PTI] Chennai, May 4 : The newly elected members of the AIADMK will meet at the party headquarters on May 7 to elect the leader of opposition in the Tamil Nadu assembly. In the 2021 assembly elections, AIADMK won 66 seats while its alliance partners got another 9 seats taking the total tally of the party led alliance to 75. On the other hand, DMK led alliance won 159 seats with the DMK alone accounting for 133 seats. Hectic parleys and backdoor meetings are being held among party leaders and legislators to select the leader of opposition with both the former Chief minister Edappady K. Palaniswami and his Deputy O. Panneerselvam staking claims for the top post. While Palaniswami is emerging as the popular leader among the party cadres and legislators after his emphatic win at Edappadi seat in Salem district with close to 94,000 vote margin, the highest by a sitting Chief minister in any elections of Tamil Nadu. Edappady K. Palaniswami was instrumental in the thumping victory of party candidates in Western belt of Tamil Nadu with the AIADMK winning 38 of the 54 seats and in his home district of Salem, the party won 10 of the 11 seats. Party sources said that EPS was the main reason behind the party winning 15 of the 84 seats in Northern Tamil Nadu owing to his decision to support the PMK's demand of 10.5 per cent reservation for Vanniyar community in Most Backward Class quota. On the other hand, O. Panneerselvam won with a majority of only 11,000 votes from his Bodinayikanar constituency in South Tamil Nadu and only a handful of his supporters were able to muster victories. This can be a stumbling block for OPS to become the next opposition leader. Senior leaders of the party Sengottayian, K.C. Karuppannan, Sevoor Ramachandran, Dindigul C. Sreenivasan met the former Chief minister Palaniswami at his residence in Salem indicating support to him. With DMK president M.K. Stalin swearing in as Chief minister on May 7, Friday, the same day itself, AIADMK is conducting the meeting of its legislators to elect party legislative party leader who will act as the Opposition leader. /IANS

23 dead in Mexico City underground rail bridge collapse
[Mexico City: An aerial view of subway cars dangle at an angle from a collapsed elevated section of the metro, in Mexico City, Tuesday, May 4, 2021. T

AIADMK legislators to meet on May 7 to elect Opposition leader

Xinxiang (China), May 3 : A total of 36 men's and women's singles players each and 16 mixed doubles pairs are competing for slots on the Chinese Olympic-bound team as the World Table Tennis Grand Smas […]

Rajasthan Imposes A Lockdown Amid Pandemic

Bhubaneswar: An elderly beneficiary comes out from a vaccination centre as others queue to receive the COVID-19 vaccine dose against coronavirus, at a city hospital in Bhubaneswar, Tuesday, May 4, […]