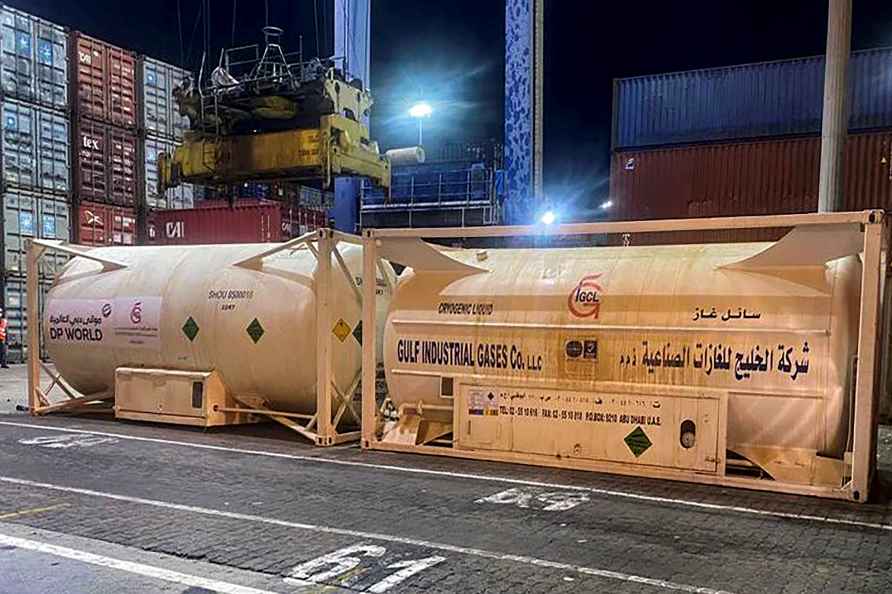 [*EDS: IMAGE POSTED BY @MEA India ON TUESDAY, MAY 4, 2021* Mundra: ISO tankers with 20 MT Liquid Medical Oxygen (LMO), India's first LMO shipment from UAE,amid global pandmeic, on their arrival at Mundra Port in Gujarat. ( /PTI] New Delhi, May 4 : Steel and oil companies have emerged as the oxygen lifeline for the country gasping for breath in the ongoing second wave of Covid-19. Companies such as IndianOil, BPCL, SAIL, Vedanta, JSPL, Tata Steel have all been diverting large portions of industrial oxygen they produce for manufacturing for Covid relief. In fact, a few companies have cut down their routine production to make available additional oxygen for medical use across the country. The support of these two sectors is crucial for Covid relief measures as they account for more than 60 per cent of the country's 7,000 MT of oxygen production per day. The role of two steel PSUs - SAIL and RINL in this direction has been significant. SAIL has already supplied 36,747 metric tonnes (MT) of Liquid Medical Oxygen since August last year. The company has also reduced the production of gaseous Oxygen, Nitrogen and Argon besides optimizing process parameters in its plants to boost production of LMO. "During this hour of emergency need, SAIL firmly stands committed with the nation and will do everything to augment the production of Liquid Medical Oxygen from its plants. All its plants have been advised to maximise production of LMO and optimize dispatch logistics so as to reduce the turnaround time of oxygen tankers," the company reaffirmed. With the help of Indian Railways and the Ministry of Steel, SAIL has also planned to load a rake from its Bokaro, Durgapur steel plants. This will help greatly in bulk evacuation of LMO and faster arrival of the same at the destination. Another steel PSU RINL is also supplying around 140 tonnes of medical oxygen per day. The first Oxygen Express had left RINL Vizag Steel Plant site on April 22, carrying 100 tonnes of oxygen to Maharastra. Sources said that Union minister for steel and petroleum Dharmendra Pradhan is monitoring oxygen production at PSUs on a regular basis and is attending to all emergency situations by augmenting supplies from companies under its administrative control. Oil PSUs IndianOil, HPCL, BPCL have also ramped up oxygen production for supplies to hospitals across the country. In fact, the companies are also in the process of setting up Pressure Swing Absorption (PSA) medical oxygen plants at over 90 locations across the country to facilitate captive oxygen generation facilities at hospitals. Official sources said that PSUs have been asked to increase production of medical grade oxygen even if it means cutting down their production for some time. Accordingly, a few companies have also reduced their stock of oxygen at plants that is kept for almost 4 days to just about half a day's stock. Companies said that they may dip into this stock as well if the need arises. Private sector metal and oil companies are not far behind and all are doing their bit to see that the national emergency is attended to. Hindustan Zinc (HZL), ESL and Sesa Goa Iron Ore Business have stepped in to augment oxygen supplies to Covid-19 patients as part of the Vedanta Cares initiative. HZL is currently supplying 5T (100 per cent of Liquid Oxygen capacity) of oxygen per day which can be used for medical treatment and is in the process of increasing it by another 2-3T. Sesa Goa Iron Ore Business is supplying 3T of Liquid Medical Oxygen (LMO) daily to the Goa government and hospitals, while ESL, the Vedanta group's steel maker, has registered its plant near Bokaro for LMO and has committed to supply up to 10T of oxygen daily. Sterlite Copper has also received approval from the Supreme Court to supply oxygen from its Tuticorin plant. Sterlite Copper's oxygen plants have a capacity to produce 1,000 tonnes of oxygen daily. Also, to respond to the national urgency, Linde India has joined hands with the Tata group and the Government of India (GoI) to undertake measures to augment the availability of LMO across the country. In one such measure to bolster the delivery infrastructure for medical oxygen, Linde India in partnership with the Tata group has secured 24 cryogenic containers for carriage of medical oxygen from international sources. These containers have arrived by air to the eastern part of India, from where Linde would be transporting them to their Liquid Oxygen manufacturing facility. At the Linde facility, these cryogenic ISO containers would be conditioned and certified for liquid medical oxygen usage. Each of these containers, which can carry up to 20 tons of Liquid O2, will be used by Linde to pick up oxygen from various manufacturing facilities and deliver it to hospitals where required. These ISO containers can also act as interim oxygen storages in remote areas which are facing oxygen scarcity. JSPL has more than 500 tons of liquid oxygen stock readily available at its Angul plant and has asked users to send their tankers to pick it up. JSW Steel, meanwhile, has commenced supplies of 1,000 tons per day of Liquid Medical Oxygen. According to Rajashekhar Pattanasetty, President, JSW Steel Vijayanagar Works, "JSW Steel has so far supplied more than 11,500 tons of liquid medical oxygen from its Ballari plant in the month of April. We have more than tripled LMO supply at JSW Vijayanagar plant from an average of 200 tons in early April to over 680 tons per day currently. The liquid medical oxygen is supplied to Karnataka as well as other States." /IANS

The Alster swans are accompanied by boats

Hamburg : The Alster swans are accompanied by boats towards the Outer Alster in Hamburg, Germany, Tuesday, May 4, 2021. Every year, the animals are brought back from their winter quarters at the Eppen […]

Steel, oil cos become lifeline with ramped up oxygen supplies for Covid relief

New Delhi, May 3 : Reacting to reports of the Central Vista as essential service, Congress spokesperson Pawan Khera has attacked the Union government and raised questions about the vaccines. Add […]