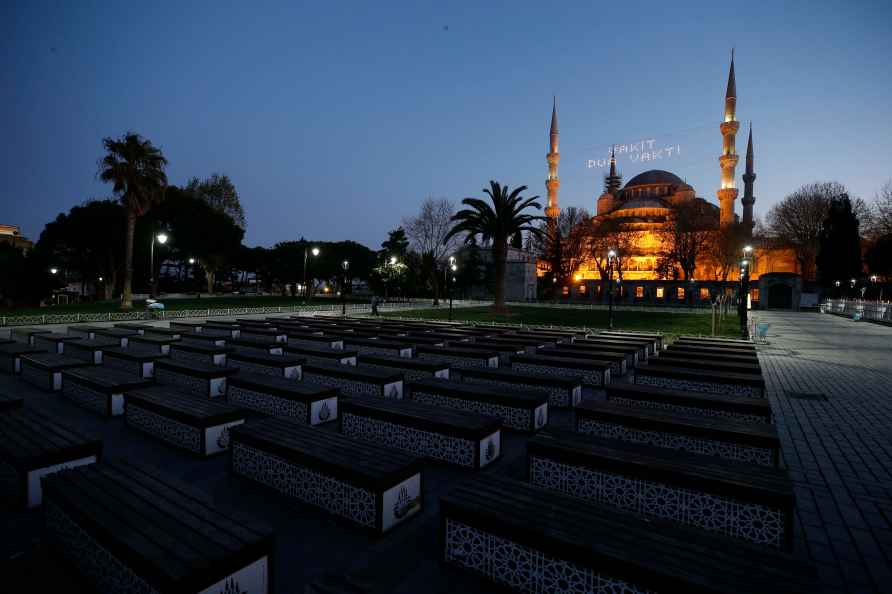 By BRIJ KHANDELWAL Mathura/Vrindavan, April 21 : The construction frenzy being witnessed all over the Braj Mandal (Sri Krishna-Radha Land) that annually draws millions of devout 'bhakts' and pilgrims, is destroying the essential pastoral character of the area. Green activists are sore over the concretisation of pathways, laying of roads on the conventional 'parikrama' routes in Govardhan and Vrindavan, the rising structures and hordes of new temples and ashrams with modern amenities that have come up all over fouling the pristine glory of the holy land. The mandarins in the Mathura-Vrindavan Development Authority (MVDA) and the Teerth Vikas Parishad, are being accused of destroying the original ambience of the Braj, which was covered by dense forests, mangroves, ponds and streams. The questionable penchant for the so-called upgradation and modernisation of amenities has vitiated the flavour and vibes that emanated from the landscape, reflects the lack of long-term vision and commitment to conserve the essential heritage character of the Braj Mandal, revered by millions of Sri Krishna bhakts globally. The twin cities of Mathura and Vrindavan are on a development spree. Old temples, dharamshalas and community halls are making way for high rise buildings and commercial complexes. Vrindavan alone has a dozen tall multi-storeyed buildings. "In the past decade there has been so much concrete construction in Vrindavan, that you hardly find any green space left," lamented Jagan Nath Poddar, convener of Friends of Vrindavan, an NGO engaged in conserving the natural heritage values of the holy town. Mathura traffic movement is chaotic, the sewage system doesn't work, encroachments dwarf the heritage temples and havelis, the ghats are poorly maintained, the lush green clusters are turning grey and brown with modern structures, the holy kunds (ponds) are struggling to survive. The original flavour of Braj culture is dying a slow but sure death, feel the locals. "The development efforts are in bits and pieces, ad hoc, sporadic, and lacking in a grand vision. The MVDA babus have never heard of heritage ambience or architectural compatibility," rues author-activist Dr. Ashok Bansal. The city seems to live in three different ages from the stone age to the 21st century; the ancient, the mediaeval and the so-called modern. The distortions are clearly visible, as the soul of Braj culture is missing, Bansal said. Conservationists are particularly angry at the utter lack of sensitivity to the historic architectural compatibility in new structures being built in Vrindavan that each day draws thousands from all over the world. Many also wonder about the utility of the proposed skyscraper temple of Sri Krishna which will put additional pressure on water and power resources and only "defile the rustic-pastoral ambience basic to Sri Krishna lore." Two years ago, the National Green Tribunal had directed that concrete structures in the name of development should not be allowed within the Braj area and certainly not 100 metres on both sides of the parikrama route. "They now want to ferry pilgrims in a chopper and buy plush bungalows that would shame five-star hotels in comforts," said green activist Pavan Gautam. Actually, the pilgrims who spend so much money and time come to see and be part of our rich cultural-religious and architectural heritage and not the ghettos or the box type concrete jungles that are mushrooming everywhere so thoughtlessly. It's not just Mathura but the entire Braj area, Gokul, Vrindavan, Govardhan where you see concrete jungles replacing old grand heritage structures. The ghats on the river Yamuna have disappeared, even the green mangroves of Sri Krishna have vanished. Architectural monstrosities, haphazard urban planning, disorganised traffic movement along the main roads due to the increasing number of encroachments, lack of pattern and thinking are self-evident, says conservationist Rajiv Saxena. "In the name of beautification, obstructions are being installed at road crossings. Surendra Sharma, president of the Braj Mandal Heritage Conservation Society says, "For Braj mandal as a distinct cultural entity, there was a crying need for an Urban Arts Panel to guide and advise town planners how to retain the pristine purity of the original Braj flavour. In Braj poetry the narrow lanes ..the kunj galies of Vrindavan, find special romantic description. Instead of preserving the heritage, they want to bypass and destroy the originality." The holy towns around Mathura: Gokul, Vrindavan, Barsana, Nandgaon, Govardhan, all need action plans to prevent garbage accumulation, movement of stray animals, for control of simian nuisance, to streamline traffic movement and tapping of drains into the river Yamuna. Unfortunately, neither the popular MP cine star Hema Malini nor the young and dynamic minister in the Yogi Adityanath government Sri Kant Sharma, have been able to give a sense of direction or vision to the development plans. /IANS

Infant killed in fire caused by matchsticks' play
Sambhal (Uttar Pradesh), April 21 : A nine-month-old infant charred to death in Gangavas village in Gunnaur town when a fire broke out. The boy'

By BRIJ KHANDELWAL Mathura/Vrindavan, April 21 : The construction frenzy being witnessed all over the Braj Mandal (Sri Krishna-Radha Land) that annually draws millions of devout 'bhakts' and pilgri […]