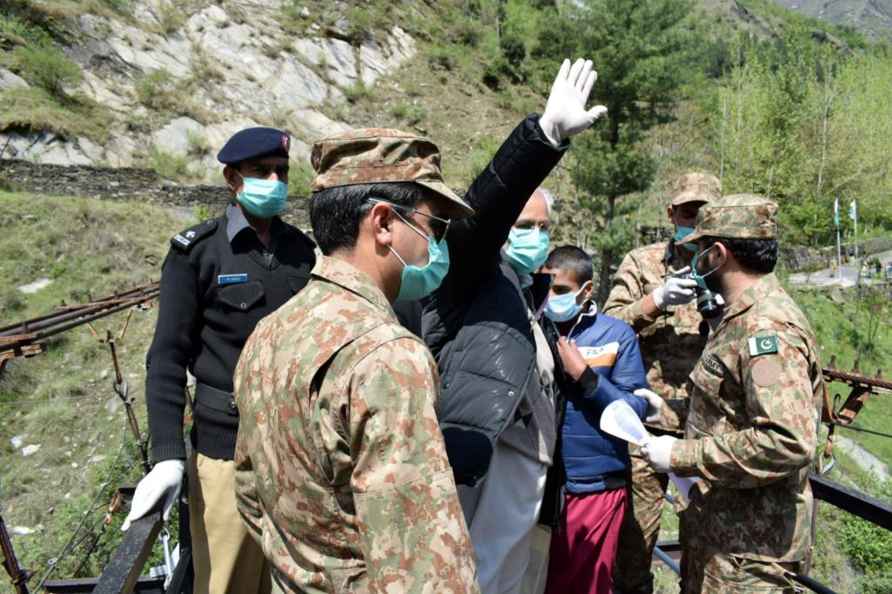 [**EDS: HANDOUT IMAGE** Kupwara: A youth from Pakistan Occupied Kashmir after he was handed over to Pakistan's officials by the Indian authorities at Tithwal Crossing Bridge located on Kishanganga river, near Karnah, Kupwara, Wednesday, April 7, 2021. The youth inadvertently crossed the line of control into Karnah. ( /PTI] Srinagar, April 7 : A youth from PoK, who had inadvertently crossed the Line of Control and entered into the Indian territory, has been repatriated at a crossing point at Tithwal on the LoC, officials said on Wednesday. The Indian Army said that on the night of April 5, a youth from PoK inadvertently crossed the LoC into Karnah in north Kashmir's Kupwara district. "The youth, who has been identified as Mausam, the son of Manzoor Ahmad from the Lipa area of Kashmir under the illegal occupation of Pakistan, was sheltered by the Indian troops deployed along the LoC for the night with due care. Pakistani authorities were informed about the whereabouts of the youth," the army said. The army further said that based on the interaction between the authorities of both sides on Hotline, the Indian authorities repatriated the youth to their Pakistani counterparts at the Tithwal crossing point as a humanitarian gesture. "The youth was presented clothes and sweets before his return. On the occasion of repatriation, the representatives of the civil administration of Karnah were present. The exchange took place at 11.50 a.m. on Wednesday," the army said. The officials added that such inadvertent crossings have taken place earlier also due to the close proximity of the villages along the LoC on either side. However, the Indian side has always been prompt in returning the individuals keeping the humanitarian issue in mind, the army said. The Tithwal Crossing Bridge located on Kishanganga river has been acting as a point of peace between the two sides. The site is visited by lots of people from either side of the border and it is emerging as a tourist site, especially after the recently agreed ceasefire between India and Pakistan. /IANS

Karnataka to go under 14-day lockdown from May 10
[Wavre: People ride on an amusement at the Walibi Amusement Park in Wavre, Belgium, Saturday, May 8, 2021. Amid encouraging signs that the latest COVI

In 7 years, Modi govt bogged by 11,424 LoC ceasefire violations: RTI
[Saur-Mogila: A girl wearing Soviet-era military uniform and her relative walks past a cannon during celebrations of the Victory Day at a World War II

UK unveils 'green list' of countries for foreign travel from May 17
[Dhaka: Shoppers crowd at a marketplace in Dhaka, Bangladesh, Friday, May 7, 2021. India's surge in coronavirus cases is having a dangerous effect on

Mumbai, May 7 : Author-producer Twinkle Khanna has praised James McAvoy saying although the Scottish actor may not have the telepathic superpowers of his "X-Men" avatar, Professor X, but he has someth […]

Karnataka to go under 14-day lockdown from May 10

[Wavre: People ride on an amusement at the Walibi Amusement Park in Wavre, Belgium, Saturday, May 8, 2021. Amid encouraging signs that the latest COVID-19 surge is on the wane, Belgians were celebrati […]

Thiruvananthapuram, May 7 : On the eve of the complete lockdown which will come into effect from Saturday morning and go on till May 16, Kerala recorded 38,460 new Covid cases from 1,44,345 samples te […]