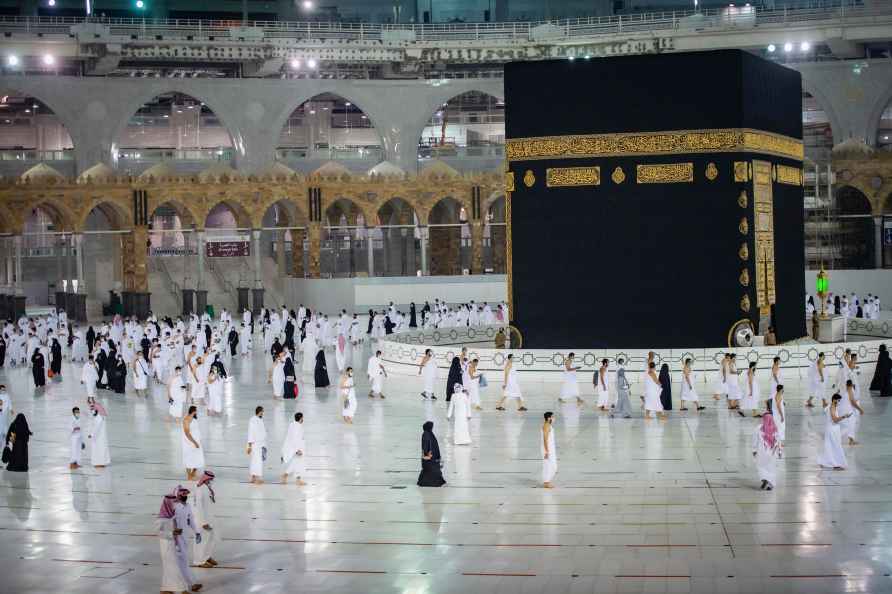 Riyadh, April 6 : Only pilgrims and worshippers who have been vaccinated against the novel coronsvirus or have recovered will be allowed into the Grand Mosque in Mecca, Saudi Arabias Ministry of Hajj and Umrah announced. Permits for Umrah (Islamic pilgrimage to Mecca) and to visit the Grand Mosque will be granted to those who have received two Covid-19 vaccine jabs; those who have received a first dose at least 14 days before their visit to Medina and Mecca; and those who have had the virus and recovered, Arab News quoted the Ministry as saying on Monday. Before embarking on a trip, a visitor's vaccination status will have to be registered on Saudi Arabia's Covid-19 app, 'Tawakkalna', which was launched last year to track the Covid-19 situation in the Kingdom. According to the Ministry, the people who wish to visit the two mosques or perform Umrah will have to register via the Tawakkalna app and the Umrah app, 'Eatmarna'. It added that the two apps are the only platforms that issue genuine permits. Nearly 10,000 Grand Mosque workers have already been inoculated as part of the Ramadan operational plan, Arab News reported. Five areas will be available for prayers at the Grand Mosque. More than 13 million worshippers wearing masks and observing physical distancing rules have visited the mosques since the seven-month prayer and Umrah suspension was lifted last October. /IANS

Kerala Police register case against priests for taking part in retreat
Thiruvananthapuram, May 6 : The Kerala Police on Thursday registered a case against the organisers of a retreat meet held by the Church of South India

No congregational prayers on Ramzan's last Friday, Eid: Jamaat
[Rawalpindi: People ignore social distancing and many do not wear face masks as they shop for the upcoming Eid al-Fitr holiday that marks the end of t

Los Angeles, May 7 : Actress Kristin Cavallari will soon start her own line of beauty products called Uncommon Beauty. "I live a very clean lifestyle. Everything I'm putting in my body is clean. […]

Over 10 mn Turks have received two doses of vaccine

Istanbul, May 7 : Over 10 million Turkish citizens have received both doses of the Covid-19 vaccine as part of the ongoing nationwide vaccination program, the Health Ministry's data showed on Thursday […]