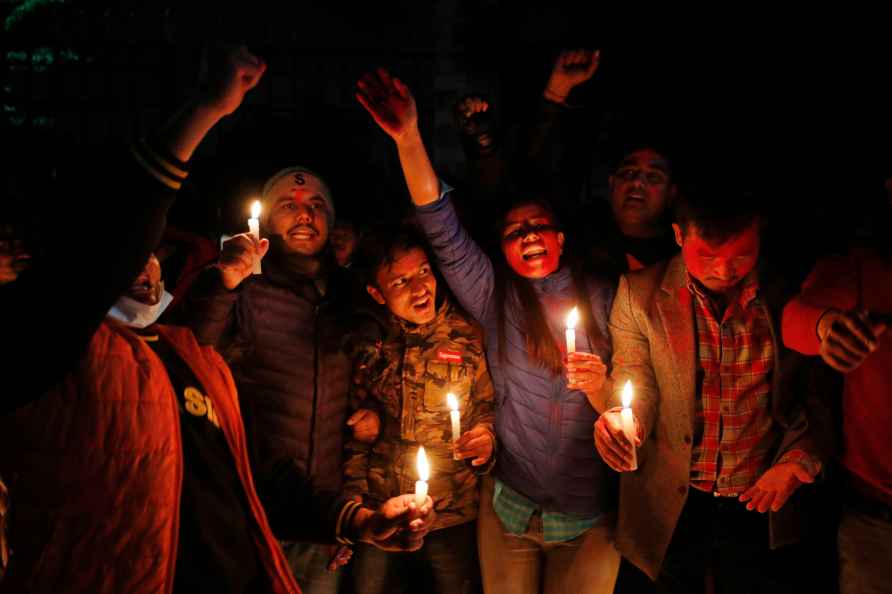 [Kathmandu : Nepalese supporters of the splinter group in the governing Nepal Communist Party celebrate the Supreme Court order in Kathmandu, Nepal, Tuesday, Feb. 23, 2021. Nepal's Supreme Court on Tuesday ordered the reinstatement of Parliament after it was dissolved by the prime minister, in a ruling likely to thrust the Himalayan nation into a political crisis. /PTI] Kathmandu, Feb 23 : Co-chair of the Dahal-Nepal faction of ruling Nepal Communist Party (NCP), Pushpa Kamal Dahal, on Tuesday stated that Supreme Court of Nepal will rule in favour of reinstatement of the House of Representatives (HoR). Speaking at a public event, Dahal expressed confidence that constitutional bodies will act in spirit of the nation's constitution, and that undemocratic and unconstitutional actions which go against the constitutional norms will stand corrected. He went on to claim that he is fully assured that the parliament will be reinstated, the Himalayan Times reported. Hearings by Nepal SC's constitutional bench on the writ petitions filed against Nepal Prime Minister KP Sharma Oli's move to dissolve the House have concluded. A verdict on the case is expected within this week. While everyone awaits Supreme Court's decision, which could sway either way based on calculations of the arguments presented by the defence and prosecution of the case, the Oli-led government and Dahal-Nepal splinter group are making presumptuous statements in their own favour. Just some days ago, Prime Minister Oli, also at a public event, warned of an impending protest if it was ordered for the parliament to be reinstated. This would cause all major decisions taken by the Prime Minister since the House dissolution to be revoked, including the mid-term polls, which would be the natural course of action. However, the consternation on how the Prime Minister might react if the court rules against his decision looms at large. /IANS

US will 'respond' if N.Korea keeps firing missiles: Biden
[UNDATED: This photo provided by the North Korean government, shows what it says a test fire of newly developed new-type tactical guided projectile by

Delhi HC sets aside single judge order directing Centre to extend till 2030 its contract with Vedanta, ONGC to produce oil from Barmer block.

Delhi HC sets aside single judge order directing Centre to extend till 2030 its contract with Vedanta, ONGC to produce oil from Barmer block. […]