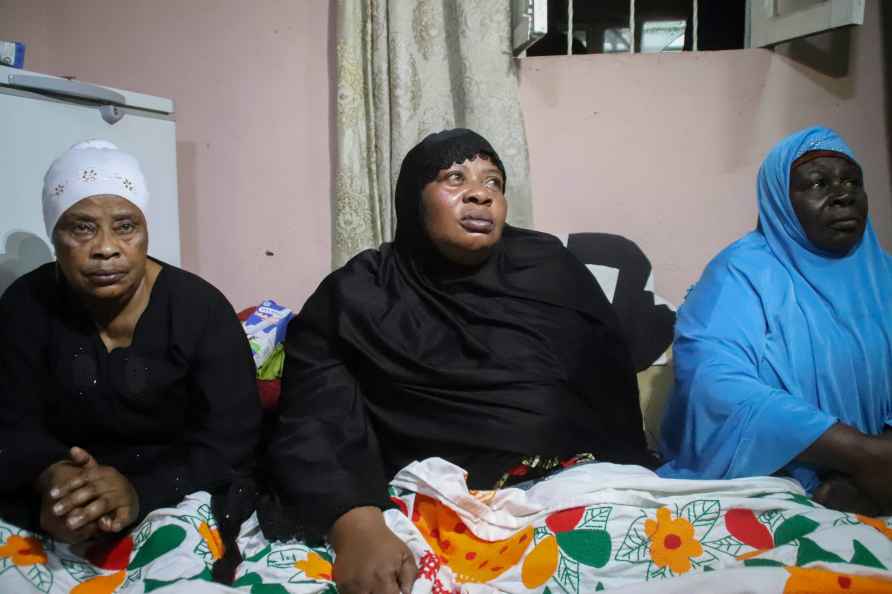 [Goma : Asina Selemani, center, the widow of World Food Programme (WFP) driver Moustapha Milambo, who was killed in the attack on a U.N. convoy that also killed the Italian ambassador to Congo and an Italian Carabinieri police officer, sits at her home in Goma, North Kivu province, Congo, Tuesday, Feb. 23, 2021. An Italian Carabinieri unit is expected in Congo Tuesday to investigate the killings of the Italian ambassador to Congo, an Italian Carabinieri police officer and their driver in the country's east. /PTI] Kabul, Feb 23 : There was a rise in civilians killed and injured in Afghanistan following the start of peace negotiations in September, according to a report released by the UN Assistance Mission in Afghanistan (UNAMA) and the UN Human Rights Office on Tuesday. The overall number of civilian casualties in 2020 of 8,820 (3,035 killed and 5,785 inured) fell below 10,000 for the first time since 2013 and was 15 per cent down on 2019, Tolo news reported. The Afghanistan Protection of Civilians in Armed Conflict Annual Report 2020 documented civilian casualties in the last quarter of the year. "2020 could have been the year of peace in Afghanistan. Instead, thousands of Afghan civilians perished due to the conflict," said Deborah Lyons, the Special Representative of the Secretary-General for Afghanistan in the report. "This important report has the overriding objective of providing the parties responsible with the facts, and recommendations, so they take immediate and concrete steps to protect civilians. I urge them not to squander a single day in taking the urgent steps to avoid more suffering," Deborah Lyons said. "Ultimately, the best way to protect civilians is to establish a humanitarian ceasefire," said Lyons, adding that "parties refusing to consider a ceasefire must recognize the devastating consequences of such a posture on the lives of Afghan civilians." The report said that for a seventh consecutive year, UNAMA documented more than 3,000 civilians killed in a single year, with Afghanistan remaining among the deadliest places in the world to be a civilian. The report detailed the impact on Afghan women and children. "They make up 43 per cent of all casualties: 30 per cent were children and 13 per cent women," according to the report. Afghanistan peace negotiations, which began between representatives of the Islamic Republic of Afghanistan and the Taliban in Qatar on September 12, "failed to alleviate the scale of civilian harm, a key indicator of violence levels. Instead, there was an escalation of violence with disturbing trends and consequences," the report said. In October, civilian casualties were the highest of any month in 2020, and in November UNAMA documented the highest number of civilian casualties of any November since it started systematic documentation in 2009. The report said that the "anti-government elements (AGEs) in 2020 caused the majority of civilian casualties (62 per cent), totalling 5,459 casualties - 1,885 killed and 3,574 injured with the Taliban responsible for most of these casualties (45 per cent of the total) and Daesh responsible for 8 per cent." Pro-government forces (PGF) caused a quarter of all civilian casualties, totaling 2,231 (841 killed and 1,390 injured), a decrease of 24 per cent from 2019, with the Afghan national security forces causing most of these (22 per cent of the total). The overall reduction in civilian casualties in 2020 was due to factors such as fewer suicide attacks by AGEs causing large numbers of civilian casualties, especially in urban areas, and a stark drop in casualties attributed to international military forces. While there was an increase in the number of civilian casualties that were unclaimed by any party and for which UNAMA could not attribute responsibility, the report finds that the Taliban caused 19 per cent fewer civilian casualties than in 2019 and the Daesh 45 per cent fewer. Strikingly, international military forces in 2020 were responsible for their lowest recorded number of civilian casualties since UNAMA began documentation in 2009. In 2020, this figure was 120 civilian casualties, down from 786 in 2019, a decrease of 85 per cent. A matter of "profound concern" remains the continuation of attacks "deliberately targeting civilians by AGEs. This includes attacks targeting members of the judiciary, media and civil society activists, as well as religious minorities, especially the Shia Muslim population, most of whom also belong to the Hazara ethnic group, and the Sikh population." "Indiscriminate attacks, such as the use of pressure-plate IEDs by the Taliban also remain of concern'," said the report, "these devices are victim-activated and cannot be directed toward a specific target." Similarly, according to the UN, concerns remain about vehicle-borne IEDs that cause many civilian casualties due to the large explosive power used, even if they are not directed against civilians or civilian objects. Also, of "grave concern" is the use of explosive weapons in civilian populated areas, especially the use of artillery shells, mortars and rockets during ground engagements, but also the use of airstrikes and IEDs in civilian populated areas, said the reports. "Ground engagements were the leading cause of civilian casualties in 2020 (36 per cent), a slight increase compared with 2019. They were followed by AGE suicide and non-suicide attacks using improvised explosive devices (34.5 per cent), a 30 per cent decrease." "AGE targeted killings (14 per cent) increased by 45 per cent; and PGF airstrikes (8 per cent) were down 34 per cent," said the report. /IANS

;Afghan civilian casualties on rise following peace talks'
[Goma : Asina Selemani, center, the widow of World Food Programme (WFP) driver Moustapha Milambo, who was killed in the attack on a U.N. convoy that a

Washington : Rep. Deb Haaland, D-N.M., is sworn in during a Senate Committee on Energy and Natural Resources hearing on her nomination to be Interior Secretary, Tuesday, Feb. 23, 2021 on Capitol Hill […]

[Goma : Asina Selemani, center, the widow of World Food Programme (WFP) driver Moustapha Milambo, who was killed in the attack on a U.N. convoy that also killed the Italian ambassador to Congo and an […]

New Delhi, Feb 22 : Amid run-up to the Assembly polls in West Bengal, Ministry of Home Affairs (MHA) has pressed 125 Central Armed Police Forces (CAPFs) in the state for "advance area domination" to e […]