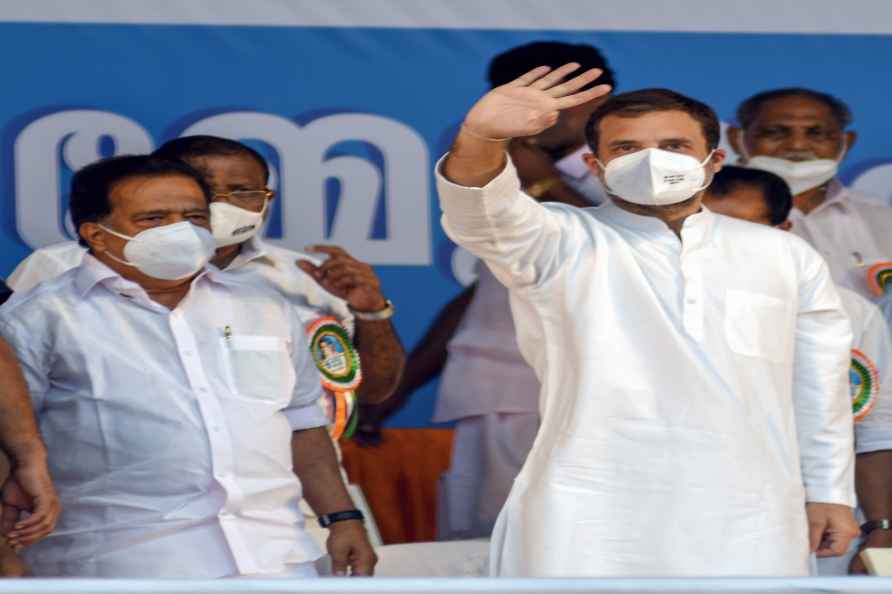 [Thiruvananthapuram: Congress leader Rahul Gandhi during the conclusion of the 'Aishwarya Kerala Yatra' in poll-bound Kerala, in Thiruvananthapuram, Tuesday, Feb 23, 2021. ( /PTI] Thiruvananthapuram, Feb 23 : Former Congress President Rahul Gandhi on Tuesday took part in a leaders' meet convened by the Congress-led United Democratic Front (UDF) here and urged the participants to ensure that an intense poll campaign is launched ahead of the Assembly elections in Kerala, scheduled to be held in April-May this year. According to a source in the know of things, various leaders of the UDF requested Rahul Gandhi to be present in the state to lead the party's poll campaign along with his sister and Congress General Secretary Priyanka Gandhi Vadra. "He (Rahul Gandhi) agreed to the proposal and also requested the leaders to see that special care is taken while selecting the candidates and due weightage is given to the youth and women," said the source who did not wish to be named. Rahul Gandhi, who represents the Wayanad Lok Sabha constituency in the state, arrived here on Tuesday and will take part in a public rally to be held here at the famed Shangumugham beach, at the conclusion of the statewide yatra of the Leader of Opposition and Congress veteran Ramesh Chennithala. On Wednesday, Rahul Gandhi will meet with fishermen's community at Kollam, located about 70 km from here. /IANS

BJP leads in municipal elections in Gujarat
[Surat: Aam Aadmi Party (AAP) candidates at an event after emerging victorious in multilple seats in the Surat Municipal, during counting day of Gujar

UP Governor in Patna